You are here: Home / Recipes / Vegetable side dishes / Pattypan squash with a cheesy bacon stuffing A colleague whose mother tongue is not English once confided in me that to her, the most annoying thing that Brits do is to speak in idioms and then look surprised when people don’t understand what they are getting at. If you think about it, the entire English language is peppered with idioms, some so ingrained that we use them without thinking about it.  But we forget that to a foreigner who might be trying to assign a literal meaning to our words, it sounds as if we are talking utter nonsense. My particular favourite (and probably the bane of the non-native English speaker’s life) are the multitude of English expressions that seem to directly contradict each other: 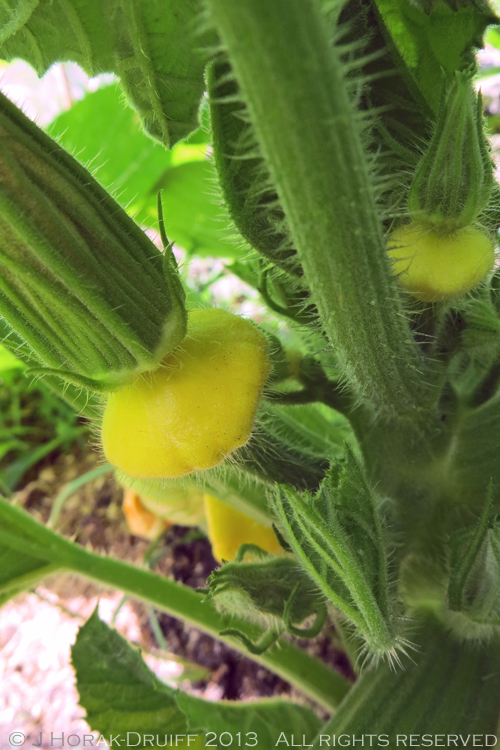 It was this final set of expressions that sprang to mind earlier this week when news reached my ears this week that Avozillas, giant South African avocados that are at least five times the size of normal avocados, are going on sale at selected branches of Tesco this weekend.  I can’t imagine there will be too many of them available as the marketing machine tells me that the entire harvest is produced by just four specially bred trees, but who can resist the lure of an avocado that’s 20cm long and weights 1.5 kg?

What is it about supersized things that so captures the human imagination?  The tallest building; the longest bridge; the biggest yacht… it certainly seems that although we are constantly told that “It’s not the size of the boat, but the motion of the ocean”, size definitely does matter. I’d go so far as to say we’re obsessed with it, and nowhere more so than in the quietly competitive atmosphere of the local allotments.  Just page through your local newspaper in Autumn and you will doubtlessly see a story about some bloke with a prize-winning giant marrow that would make a nun blush, or carrot as long as a golf club.   A quick trawl of the interwebs produced the following prize-winning Frankenveggies:  an  11.2kg  sweet potato;  a 56kg marrow; a 34.4kg green cabbage; a 122kg watermelon (Baby’s not carrying THAT one!); an  8.5kg carrot; a 766kg pumpkin;  a 15.8 kg broccoli; an embarrassingly long 90cm cucumber. Even when blokes aren’t digging special beds and hand-pollinating their marrows (not a euphemism!) to grow the prize winner, it seems that they subscribe to the bigger-is-better school of thought on their allotment. Nick, as I have said previously, has managed to grow som zucchini cudgels that look more like weapons of mass destruction than vegetables; and his crop of butternuts contains some specimens the size of which I have never seen in my life. The first few pattypan squashes that he brought home were the normal size you’de see in supermarkets in South Africa – maybe 7 or 8cm in diameter.  But then he neglected to pick for a few days – literally just a few days – and then he started bringing home these giant pattypans – easily 14cm across. Frankenpatty. 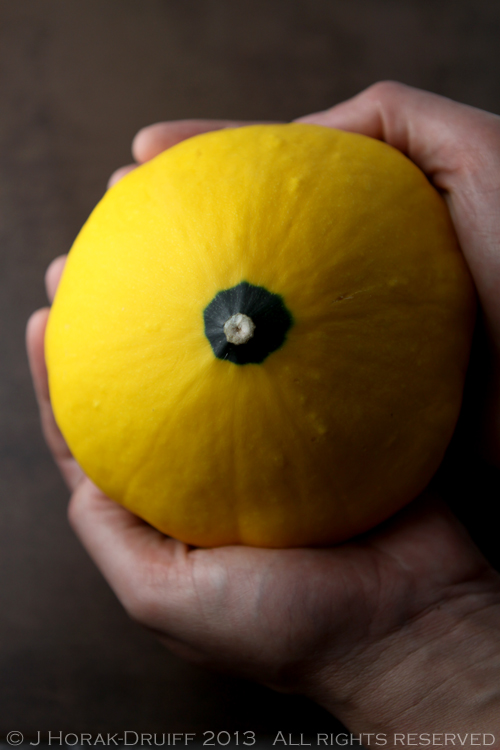 But as luck would have it, these are absolutely ideal for stuffing – far more so than the smaller specimens that are just too fiddly and are best enjoyed whole – so that’s what we did.  They’re also ideal for cubing and making barbecue kebabs out of, but that’s a whole other story. The stuffing is pretty flexible – I can imagine it would also work well with some substitutions (feta instead of Parmesan; or maybe chorizo instead of bacon), and of course it would also work well in just plain old ordinary stuffed marrows, but the slightly firmer and less watery consistency of the pattypans make them ideal for this dish. 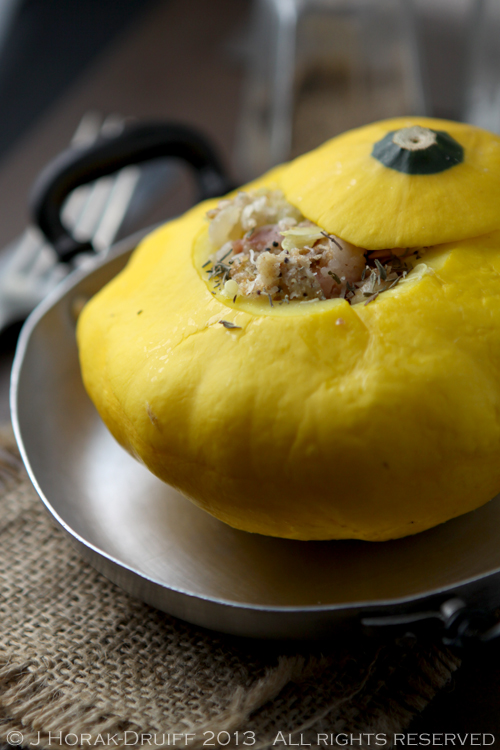 4.5 from 2 reviews
Pattypan squash with a cheesy bacon stuffing

Print
Prep time
25 mins
Cook time
15 mins
Total time
40 mins
If you are growing your own pattypan squash or can get your hands on some larger specimens, then this should be your go-to recipe. Quick, delicious, and a little bit fun!
Author: Jeanne Horak-Druiff
Recipe type: Entree
Serves: 2
Ingredients
Instructions
Wordpress Recipe Plugin by EasyRecipe
3.2.1255