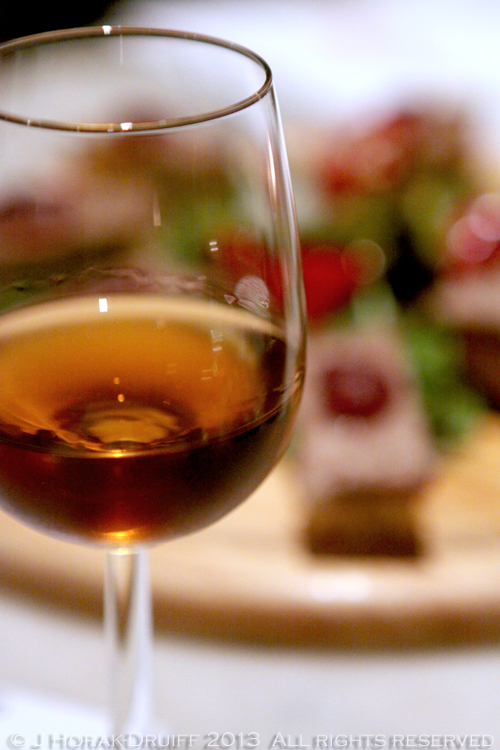 Isn’t it funny how, despite living in London for many years and walking down a particular street many times, it is entirely possible to look straight past a particular shop or restaurant?  When a friend of mine invited me to dinner at Bedford & Strand earlier this year and said it was in Bedford Street, I realised that I had probably walked up that street dozens of times on my way from Embankment station to Covent Garden – and yet I had no recollection of ever seeing such a restaurant.  But when you do find it, the reason why you haven’t noticed it before is immediately apparent : all the action takes place in the basement, and at street lever there is literally a door leading down some stairs, making you feel as if you have arrived at some secret members’ club.

In fact, Bedford and Strand is an independently owned wine bar, bistro and deli opened by a group of friends in 2005 and arguably one of theatreland’s best-kept secrets.  The menu consists of a happy marriage of classic British and French dishes made from responsibly sourced ingredients.  There’s also an interesting wine list, divided not by colour or country but into categories like Reliable, Honest, Decent, Good and Staff picks.  I  like that all their wines are available by glass, carafe or bottle, and that there is a good selection of sweet and fortified wines – which brings me to the reason for my most recent visit.  For three months this summer, Bedford & Strand are running a summer wine festival.  Each month has a theme: Rosé in June; Sherry in July; and Vermouth in August – and for each month the chef and sommellier work together to create matching tapas-style snacks to enjoy with each wine – but with a British twist. Earlier in July, I attended a press evening for the sherry month, hosted by the very charming and knowledgeable Marcin Schilling, business development manager at Gonzalez Byass, one of Spain’s best-known Sherry bodegas since 1835. 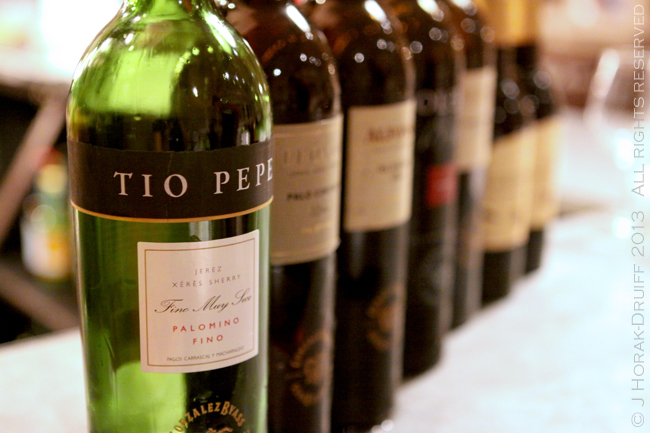 As I wrote previously, for many years Sherry was viewed as something that your doddery old maiden aunt would order before dinner – but in fact nothing could be further from the truth.  Sherry is one of the most versatile wines of all, including everything from bone-dry styles to syrupy, treacle-like sweet styles, and everything in between.  Marcin explained a bit about the solera method of making sherry, a system of fractional blending that is still used today allowing producers to maintain a consistent flavour and quality to their sherry year on year, rather than single-vintage wines where a great year could be followed by a disastrous one.  He also reminded us that Sherry is a protected term and only wines made by the traditional solera  method in the triangular area of the province of Cádiz between Jerez, Sanlúcar de Barrameda, and El Puerto de Santa María may be called sherry.  And from there we rapidly moved on to the the food and sherry pairing, created by Head Chef Tim O’brien and Head Bartender Ivan Ramos to show off each sherry to best effect .  Each glass is a 100ml measure (except for the Pedro Ximinez which is 50ml) and the prices include a tapas-style food pairing, making this exceptionally good value for money.

We started off with Gonzalez Byass’s flagship wine, the Tio Pepe Fino (£5.00) paired traditionally with olives and salted roast almonds.  To those who grew up thinking of Sherry as something sweet, this will come as a shock.  It’s seriously bone dry, almost salty, and super-crisp and to me  it epitomises a hot summer’s day in Spain.  Barrel-matured for five years, it’s dry, almost slightly saline notes lend themselves well to salty foods like the almonds and olives we had as well as cured meats (Iberico ham or chorizo) and full-flavoured cheese. 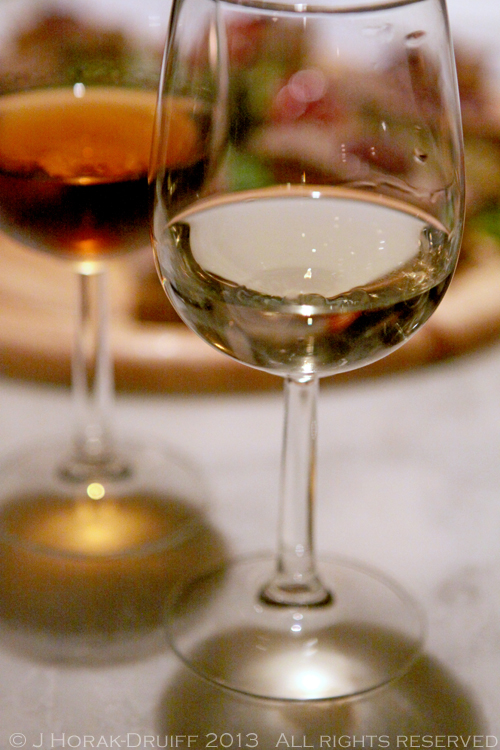 Next up was the Leonor Palo Cortado (£5.50) – and I had to disclose to Marcin that this is one of my favourite wine styles of all time, so I was unlikely to be critical of it in any way!  Paol Cortado is also a relatively rare sherry because you never can tell when you’re going to find it in your sherry barrel.  It is initially aged under a flor yeast cap to become a fino or amontillado, but then naturally loses its yeast cap and starts to oxidise like an Oloroso, leaving a wine with the crispness of an amontillado and the richness of an Oloroso.  It makes for a nose of vanilla and almonds, and a nutty and rich palate with a perfectly clean, balanced, lingering finish.  This was very well matched to slices of wild boar terrine on toast, topped with sweet chutney, and the food emphasised the wine’s nuttiness. (Trivia: Palo Cortado literally means a “cut stick” – when fino is made, each barrel is marked with a single downward pen stroke; but when a barrel loses its yeast cap and starts to oxidise, a line is drawn through the stroke – so it looks like a stick cut in half.  Fact!) 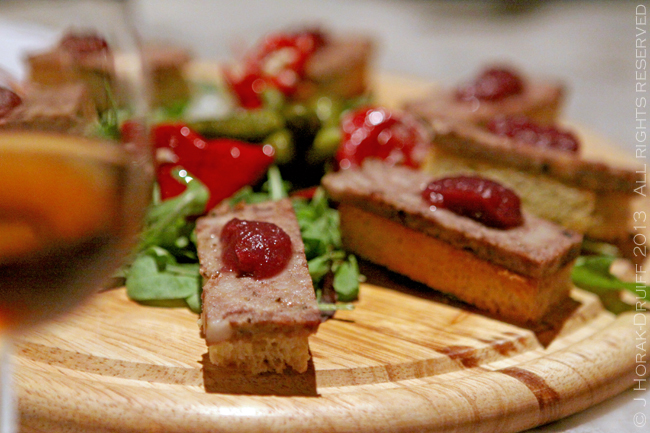 This was followed by a glass of Alfonso Oloroso Seco (£6.00).  Although Oloroso is generally thought to be a sweeter sherry, this dry-style Oloroso was a deliciously versatile drink with a beautiful deep amber colour with has undergone oxidative ageing (so no flor cap).  Caramel and nutty aromas give way to a robust but refined palate of toasted nuts, honey and dried fruits, but with a lovely acidity to balance out the sweetness.  This wine could easily pair with any food you’d normally match a red wine to and to illustrate this point, Bedford & Strand paired it with spoonfuls of excellent, well-seasoned  Scottish fillet steak tartare. Food seemed to bring out some lovely vanilla notes in the wine. 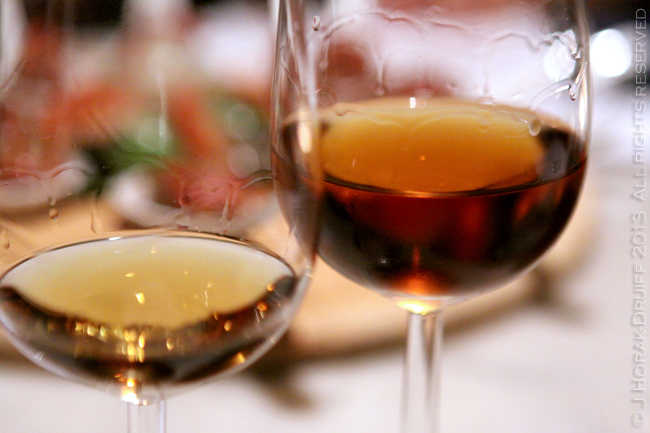 Moving towards the sweeter end of the sherry spectrum, our next sherry was the 1847  Solera Oloroso Dulce (£6.00), the 1847 denoting the year that this particular solera was started. This will be a far more familiar wine to those who associate Oloroso with sweet wines – the nose is packed with raisinny notes and a hint of green figs preserved in syrup (a flavour familiar to most South Africans!).  The palate is rich and smooth without being too sweet and you instantly guess that this wine would be a very happy match with cheese.  But what I really loved about the food pairing with Norbury Blue cheese was the novel presentation – instead of a hunk of blue cheese we got a profiterole filled with a blue cheese cream – decadent and divine.  Blue cheese is usually a really tough match for wine, but the Oloroso matched fantastically, with the cheese bringing out the raisinny, nutty flavours in the wine. Our final sherry of the night was the Nectar Pedro Ximenez  (£5.00) – imagine the Bristol Full Cream sherry your granny used to drink and turbocharge it. PX is a dark cream sherry aged for about nine years and it emerges from the barrel as a tooth-achingly sweet wine with the look of slightly diluted dark treacle.   But don’t think it is just syrupy – together with its sticky consistency, it boasts rich and delightful Christmas pudding flavours of dried fruit, caramel and even mocha.  I have always found it to be a little too sweet to match most desserts, preferring to sip it on its own – but the matching dessert at Bedford & Strand was inspired: a tumbler containing a scoop of good vanilla ice-cream over which you simply pour the double shot of PX.  It’s a match made in heaven. 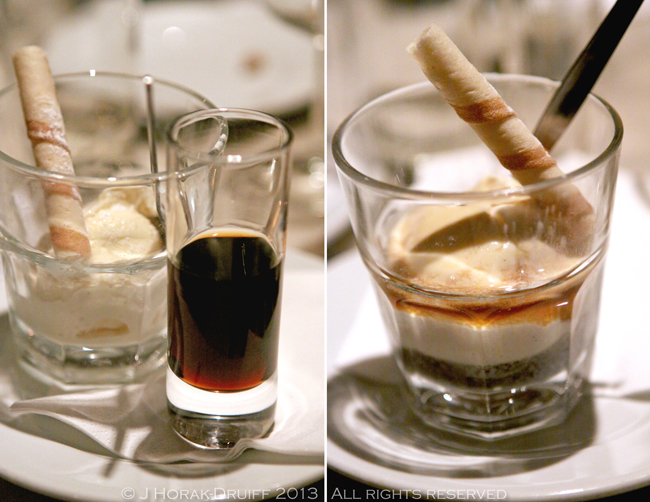 At the end of our tasting, Marcin also told us about some of the company’s premium sherries – rare old soleras aged for 30 years or more. There were a couple on offer, sold by the half bottle (£45 for 375ml), but we chose to try the Matusalem Oloroso Dulce rather than the Noe Pedro Ximinez. This was wonderfully complex and balanced with notes of glacé fruit, spices and candied peel as well as bitter dark chocolate and coffee notes  – a wonderful end to any meal.  We also had a look at the three special sherry cocktails (£8.00 each) that have been devised for the summer wine festival: the Solera Sour (1847 Solera Oloroso Dulce mixed with Havana Club Especial, fresh lime and egg white); the very pretty Jerez de la Frontera (Nectar PX married with Elements 8 God Rum, fresh lemon and raspberries); or my choice, the Fine Oceanic Gimlet (Tio Pepe Fino shaken with Col Fox Gin, fresh lime and lemon grass in a martini glass) – a refreshing glass of summer. 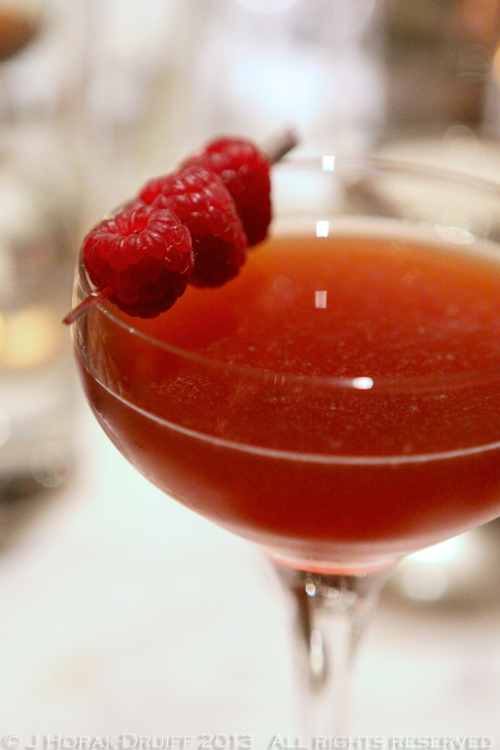 If you haven’t yet discovered Bedford & Strand I urge you to do so soon – perfect for pre- or post-theatre drinks, snacks or full meals.  Although the sherry month of the Summer Festival of Wine is drawing to a close, August brings a month of Vermouth tastings and food matching – and if the sherry menu was anything to go by, the Vermouth will be fascinating.

DISCLOSURE: I attended this sherry & food matching evening as a guest of Bedford & Strand.