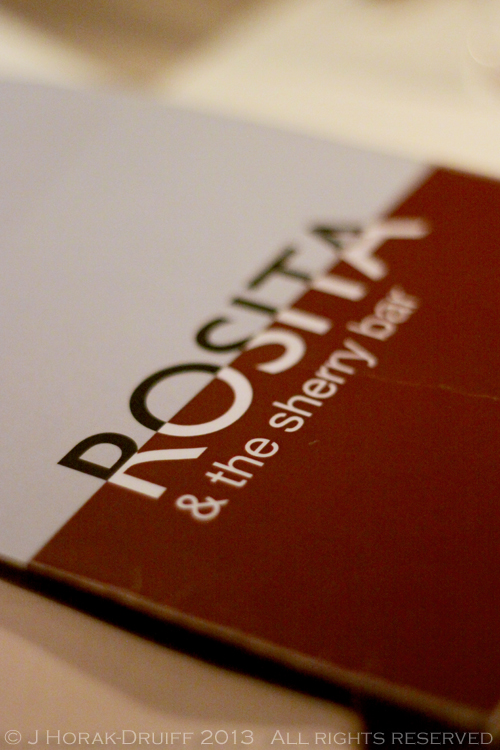 When I was a student, a friend an I loved playing a game where you tried to imagine what your pet would drink if they were human.  In this way, we figured out the the neurotic small dog would drink a white wine spritzer; the black cat with the attitude of a panther would drink Jack Daniels straight up; and that all Staffies would drink beer (lots of it, preferably from a funnel).  But what what kind of pet would drink sherry?  After much debate, I think we decided it would be something like a crotchety, aged, pedigree Siamese cat.  And there, ladies and gentlemen, is the PR problem that sherry is faced with, neatly summed up in a visual metaphor.

You see, most people outside Spain still think of sherry as something that they stole and drank from their parent’s drinks cabinet as a child, leaving them with memories of a sugar rush followed by a hangover. Nice.  Or they think of sherry as a sweet, viscuous drink sipped only by doddery older relatives before an interminable Sunday family lunch. But this could not be further from the truth.  Speak to any Spaniard and they will assure you that there is a sherry for everyone. If you don’t know any Spaniards, your next best bet is to head down to Rosita, a new sherry bar and restaurant near Clapham Junction, which runs regular sherry tastings. I recently attended a tasting evening there hosted by sherry merchant Gonzalez Byass, and the evening starter off with a short potted history of sherry.

Sherry (an Anglicization of Jerez, the town in Andalucia where it originated) is a fortified Spanish wine with a long and unusual history. Originally, it was not a fortified wine, but such was the demand for the wine that to prolong the shelf life of the wines for export purposes, producers started adding fermented grape must which led raised alcohol levels. This meant that the wines could survive a sea voyage to, among other places, England where sherry became tremendously popular.  Various European wars in the 1700s  meant that sherry export markets dried up and merchants were left with excess stock.  Rather than throw this excess stock out, they decided to leave it to mature in oak barrels (often under the hot Andalucian sun rather than in cool cellars) until the market recovered, and they discovered that the warmth of the sun encouraged an active fermentation and natural aging, producing more concentrated, complex, nutty and full-flavoured wines.  When an order came in, sherry merchants would bottle a little wine from the oldest barrel and then top up the barrel with wine from a newer vintage.  The introduction of fresh wine each time a barrel was topped up stimulated the flor yeast, which imparted fresh flavours and aromas.  And just like that, modern sherry was born. This system of fractional blending (called the solera system) is still used today allowing producers to maintain a consistent flavour and quality to their sherry year on year, rather than single-vintage wines where a great year could be followed by a disastrous one.   Today, sherry has Denominacion de Origen status (meaning that only wines produced by the traditional solera  method in the triangular area of the province of Cádiz between Jerez, Sanlúcar de Barrameda, and El Puerto de Santa María may be called sherry). As I said, sherry is not confined to the sweet, sticky stuff your maiden aunt used to drink – there quite literally a sherry to suit ever taste.  Roughly in order of ascending weight and sweetness, you have:

At our Rosita sherry tasting we tried:

The tasting also included some snacks to match with each sherry, illustrating its astonishingly versatile food matching abilities.  After the tasting, we retired to the restaurant area at the back of the room for dinner.  Instead of ordering, we asked the chef to send out a selection of what he felt would showcase the kitchen best, each matched with a glass of sherry.  We started with tempura pickled mussels served on a small salad  (£4.50) paired with Equipo Navazos I THINK Manzanilla “En rama”. The minimally filtered bone dry Manzanilla was more than a match for the fairly strident flavours of the pickled mussels without ever overwhelming it, while the tempura mussels themselves were feather-light and crispy on the outside, while retaining a juicy plumpness on the inside. This was followed by salt cod croquetas paired with Equipo Navazos La Bota de Fino No. 35  “Macharnudo Alto”.  Once again, the croquetas were light and satisfyingly salty, while the Fino provided an assertive but never overpowering match. 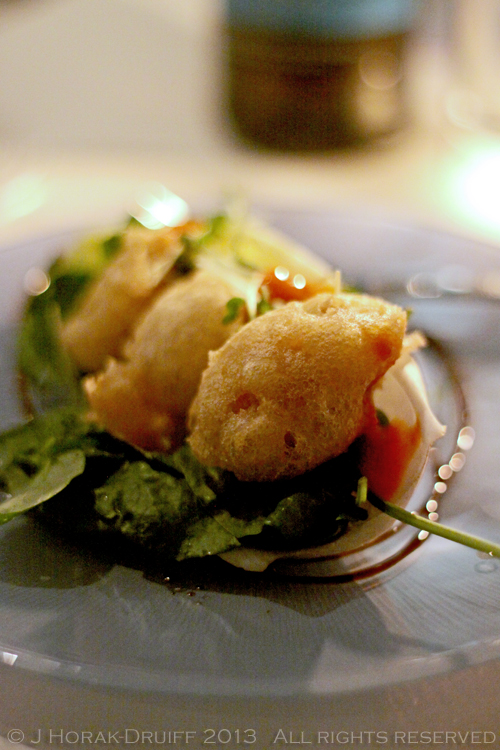 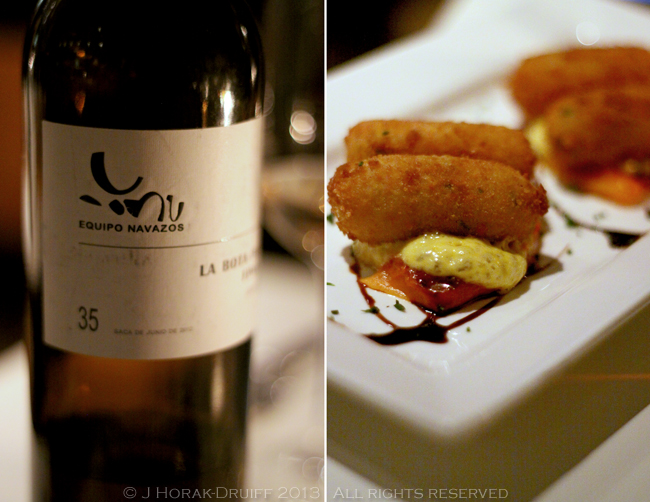 The next course was quite literally The Biggest Scallop in England: seared scallop on on a rosti base with a creamy rosemary-scented sauce (£8.45), paired with Gutiérrez Colosía Amontillado del Puerto.  If you had told me a week previously that it was possible to match something as delicate as a scallop with a sherry, I would have called you crazy.  After this dish, I would have called you wise. I texted a friend after the meal, saying that after this course, I was ready to weep with joy – and that’s the truth! The Amontillado and the scallop managed to bring out the sweet nuttiness in each other – truly a match made in heaven.  And the hits just kept on coming with fried duck egg and shaved fresh truffles on a potato & cabbage mash  paired with Romate Don José Oloroso .  Once again, I was surprised that a relatively delicate dish such as this worked with an Oloroso, but it did, with the sherry forming a wodnderful foil for the earthiness of the truffles. 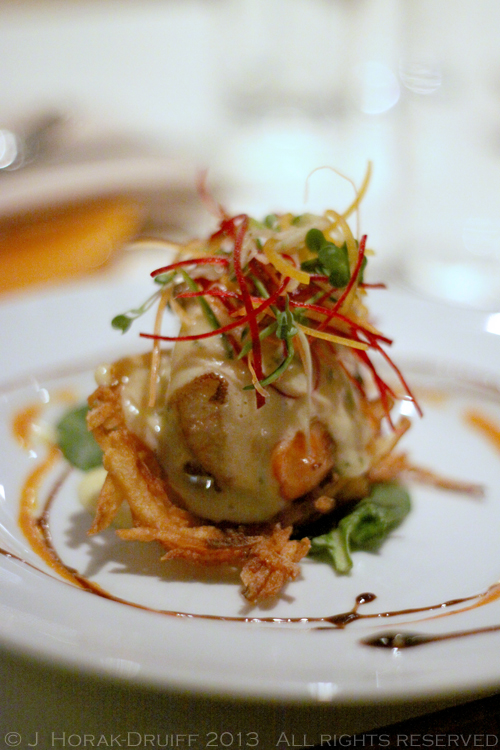 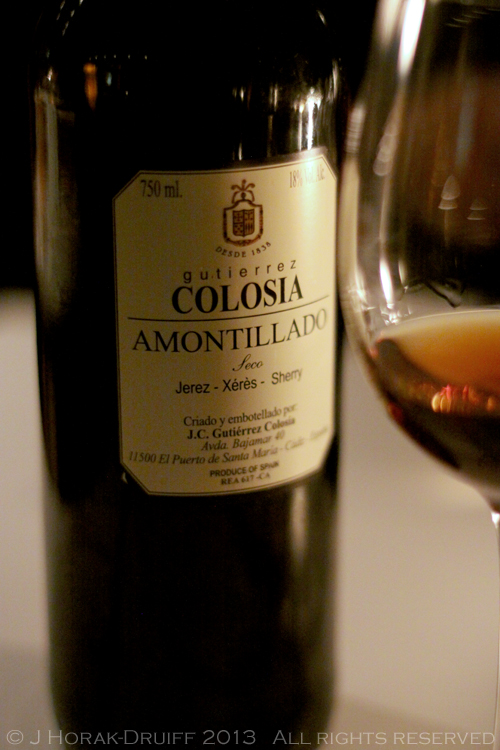 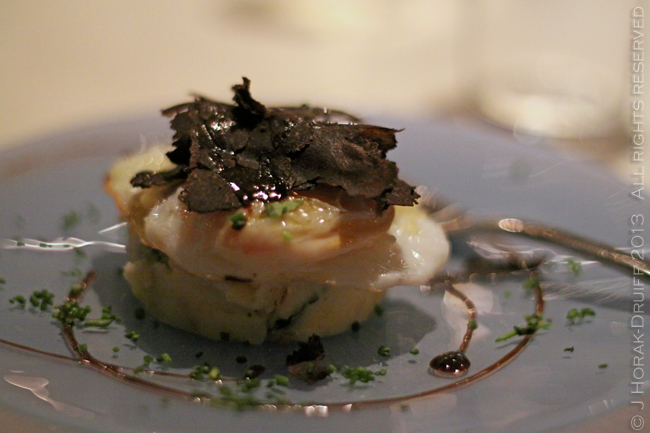 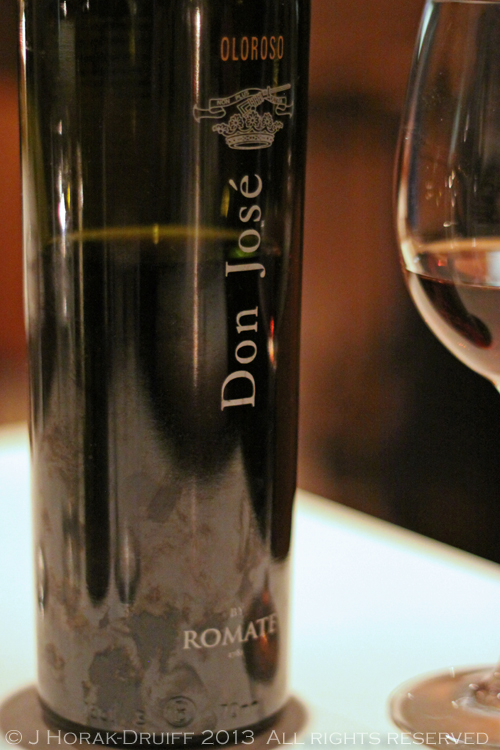 My other favourite dish of the night was a a ridiculously tasty piece of Iberico pork presa shoulder on a roasted pepper with olives (£9.20) served with with Equipo Navazos No. 34 La Bota de Palo Cortado.  Presa pork shoulder is exquisitely marbled with fat, and this is deliciously apparent once it is cooked in the supreme tenderness and juiciness of the meat.  The Palo Cortado was fantastic with this – standing up to the pepper and olives and yet not dominating the subtly sweet meat, and dealing easily with the high fat content. A sublime combination.  The final dish of the night was Bulgur yoghurt ice-cream with tocinillo de cielo (a rich egg custard) and mint granita (£4.00)  paired with a Gonzalez Byass Solera 1847 Oloroso Dulce.  Less heavy than a PX would have been, this was a good choice for a dessert, although I thought that this was probably not my favourite match of the night,  I wonder how a plate of manchego (available for £7.50) would have fared instead?  Still, it was a perfectly pleasant end to a near-faultless meal. 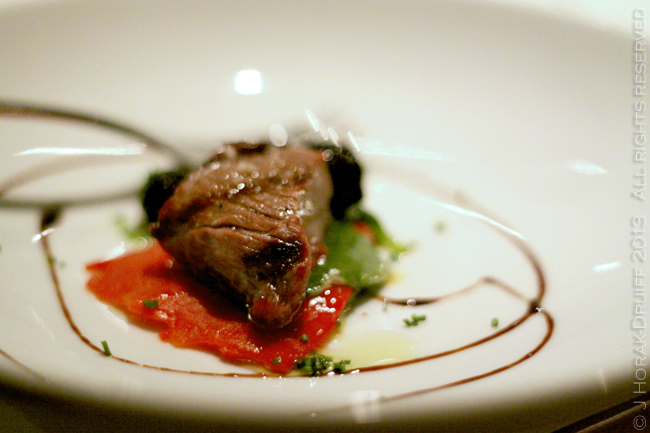 I left about 90 minutes later than I had originally planned, with a head full of sherry facts, a belly full of Spanish flavours, and a new-found obsession with Palo Cortado. The staff were extremely friendly all evening and knowledgeably answered any questions we had about both the sherries and the wine.  Other than what we had, there were many other things on the menu to like – I would, for example, happily return to try the oxtail croquetas; the crispy mushroom with sobrasada, or the sweet potato buñuelos, organic orange honey.  The format of the sherry tasting worked perfectly, balanced between learning and enjoyment, with a pleasantly social edge.  And although I was already a sherry convert, I was genuinely amazed at the versatility of sherry as a match for almost any food.  Clapham Junction is not an area of London I often find myself in, but if you live in a generally southerly direction, Rosita should become your home away from home.  And if you are not yet a sherry convert – what are you waiting for? You have nothing to lose but your preconceptions! Classes cost £10, which can be claimed back against the purchase of a bottle of sherry.  Set menus similar to what I had (although without the matched wines for each course) are available at a very reasonable £26 and £28 per person.

DISCLOSURE:  I enjoyed this meal as a guest of Rosita but received no other remuneration to write this post and all opinions are my own. 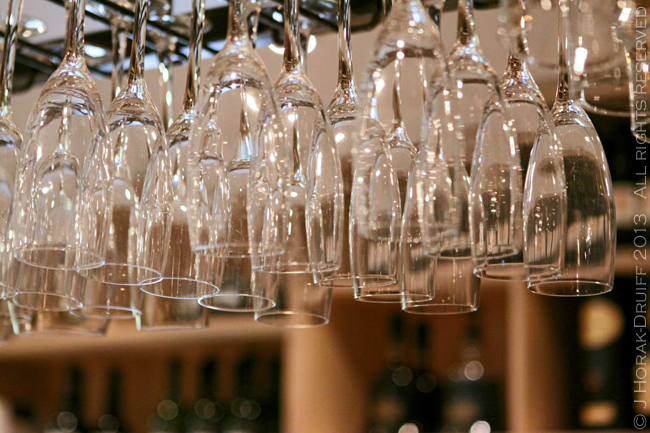