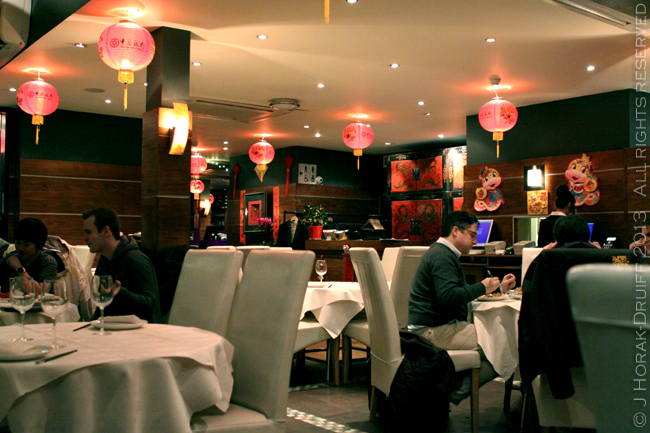 When we first came to live in London, like most new arrivals, we did not have a lot of cash to spare.  I was trying to finish a thesis and struggling to find part-time work; we had just shelled out what seemed like an obscene amount of money as a deposit to rent a flat; and seeing as one of the main purposes of our coming to the UK was to make and save some money, it made no sense to spend loads of money on eating out and entertainment.  But there are only so many evenings in a week that you can spend at home in front of the television eating vegetable stir fry and we soon figured out where in London we could find the best free or cheap entertainment.  One of our earliest Friday night habits was to head off to Soho and just stroll around.  Sometimes we would chance upon  a film premiere in Leicester Square; sometimes we would take visiting friends past the seediest adult shops in Soho and giggle at their reactions; or sometimes we would just sit on the grass in Soho Square, drinking a bottle of wine and watching the passing parade.  After our dose of free entertainment, we would often head off to the Stockpot in Old Compton Street, but more often than not we would head for the (to our mind) impossibly exotic Gerrard Street in the middle of Chinatown for a spot of dinner. The décor of each restaurant varied so slightly as to render them almost indistinguishable; ditto the menus; and the service ran the full gamut from shouty and abrupt to sullen and unresponsive – but we were intrigued by the sheer novelty of it all.

Twelve years later, things have changed somewhat.  We both have full-time jobs; we have struck a better balance between saving and spending; and we are filled with joy rather than dread at the prospect of a Friday night at home.  The question was – had Chinatown restaurants changed as much as our lifestlye?  Recently I had the chance to find out when I was asked to take part in a project to review a particular Chinatown restaurant.  The restaurant that I was assigned was Imperial China on Lisle street, a venue that I had coincidentally visited about 6 weeks previously for a friend’s dim sum birthday lunch.  My first thought when I viewed the website was that they were being economical with the truth – surely nowhere in Chinatown had an entrance under a skylight where you crossed a bridge over a koi pond?  But I was pleasantly surprised to find that this is indeed the case – the street entrance is a narrow doorway sandwiched between two other businesses and the restaurant has turned this into an asset in the form of a fairy-lighted passageway leading to the front door, flanked by a koi pond filled with impressively large koi.  Inside, the restaurant is equally impressive with sleek dark wood décor and a mezzanine level.  I was ready to be impressed and leave behind my old impressions of Chinatown restaurants. 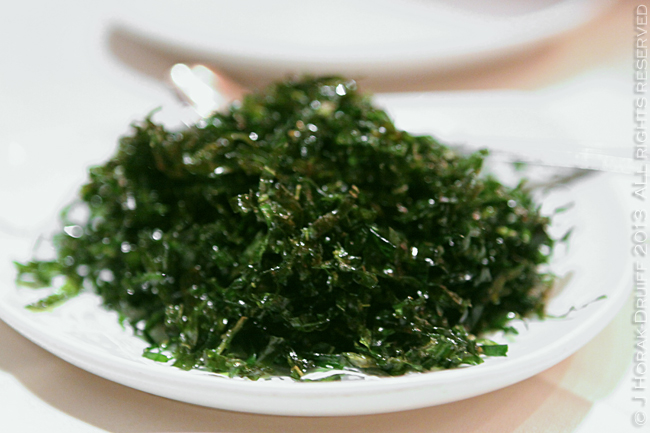 The menu is divided into a number of set menus as well as the standard a la carte menu  and there is a separate dim sum menu which is only available at lunch, although there is a small dim sum platter available on the evening starter menu if you simply can’t do without.  We started with one of my favourite dishes – deep-fried crispy seaweed (£4.90) which was as it should be: salty, sweet, umami-rich and crispy.  Our other starters were spring steamed prawn dumplings (£4.60 for 3) and deep-fried soft-shell crab with spicy salt & pepper (£7.80 each). The dumplings were not huge but were stuffed to the brim with the fattest sweetest chunks of prawn I have had in a while, accompanied by a pleasantly spicy dipping sauce.  My favourite, though, was the crab in its featherlight batter and spiked with slices of fresh red chilli.  Seven pounds does not buy you a lot of crab, but it is seriously delicious. 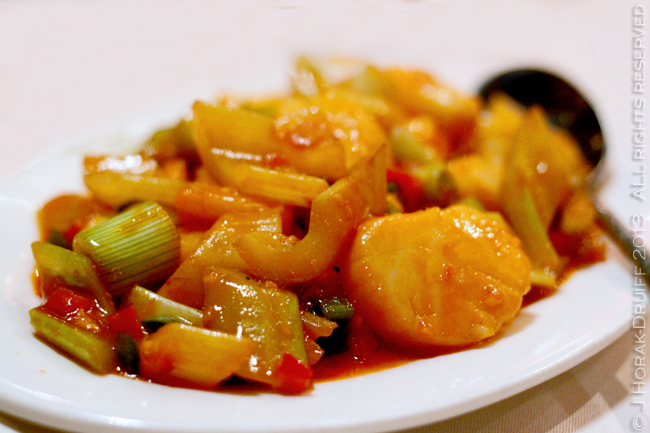 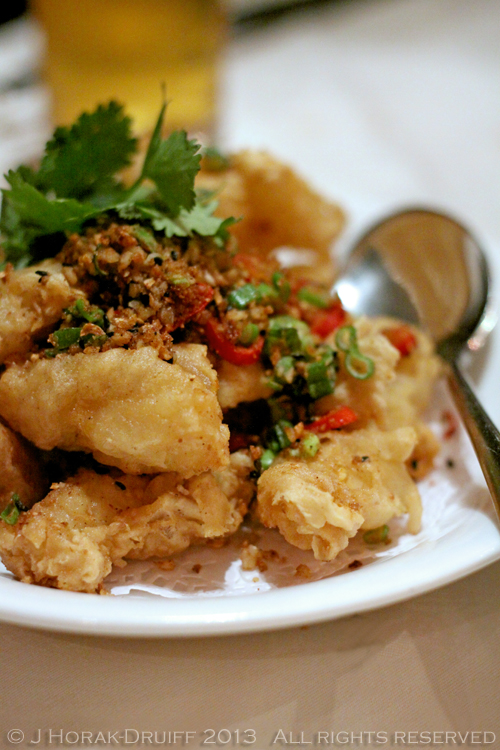 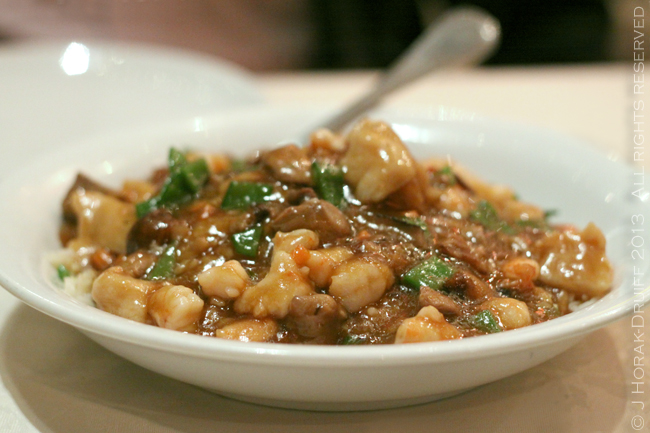 For our mains, Nick chose the stir-fried scallops with vegetables (£12.80) and I chose the crispy fried squid with spicy salt & pepper (£12.50).  The scallops were plump and tender and contrasted well with the crisp chunks of celery in the dish, even though the sauce was a little luridly orange.  My squid was… variable.  The good chunks were fairly tender with crispy batter and a generous amount of seasoning – but some of the other chunks had not been fully coated with batter and had fried to the point of reinforced rubber. For a third shared dish, we chose the Fu Jian fried rice  (£10.50) which turned out to be more of a main course than a side dish – rice topped with generous chunks of prawn, chicken and vegetables – but was tasty and filling. As a vegetable side, we ordered stir-fried Chinese broccoli with garlic (£10.50). This was cooked perfectly al dente and well-seasoned – but at the same price as a main course it was not great value for money, or a particularly huge portion. Service had been somewhat joyless and perfunctory all night, but after the main course dishes were cleared, it took a turn for the worse. I asked for more water and the waiter sloshed it into the glass and onto the tablecloth like the scene where Magenta sullenly serves dinner in the Rocky Horror Picture Show, with no attempt to mop it up.  I was fully expecting our waiter to return with a dessert menu or at least an offer of coffee or tea – but he disappeared like mist before the morning sun.  After ten minutes, I eventually waved him over and asked if we could see a dessert menu.  The menus were brought over and I figured he’d be back shortly to take our order…but once again I was labouring under a misapprehension.  After a further ten minute wait, Nick had lost his patience and I had lost any appetite for dessert I might have had and we then had to catch the waiter’s attention once again to ask for the bill.  He neither enquired whether we had wanted dessert, nor offered us coffee or tea.

The bill for two people including two beers for Nick, a glass of wine for me and service came to a shade over £80 which is not particularly cheap, compared to the scores of other Chinese restaurants within a one mile radius.  Food-wise, I felt that the dishes were a rollercoaster of quality, ranging from the delicious crab to the disappointingly varied squid – but it was the service that let the restaurant down the most.  All the koi ponds and fairy lights in the world can’t make up for sullen service and I left feeling if  not exactly cheated, but certainly not pampered in any way. The verdict? Rather than going for dinner, go for a dim sum lunch (which I have done previously)..  The service is still perfunctory, but the dim sum is excellent.

Liked: the crispy soft shell crab
Disliked:  the surly service, the variable food, fairly steep prices
On a scale of 1 to 10:  5 DISCLOSURE:  I reviewed this restaurant as part of a Chinatown restaurant review campaign sponsored by Cox & Kings who specialise in travel packages to various destinations including package and tailor-made holidays to China. The cost of my meal was reimbursed by Cox & Kings but I received no further remuneration to write this post and all opinions are my own.