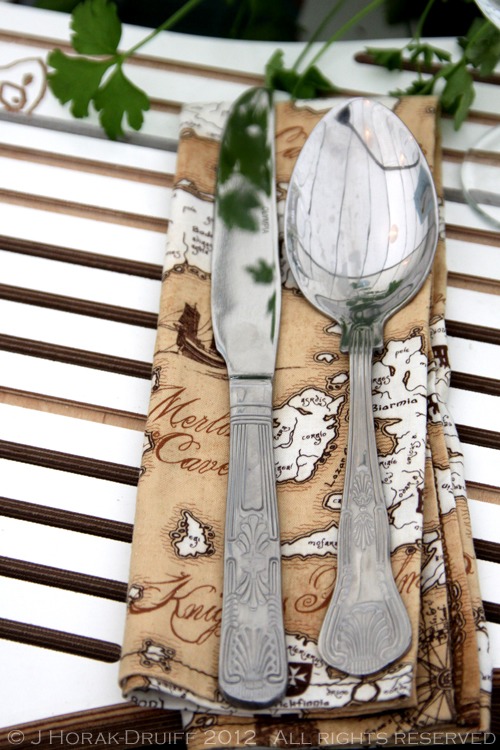 It I were to tell you that I dined off the coast of India last Saturday night, you’d probably be thinking: “What??  She’s travelling AGAIN?!”.  But you’d be wrong.  In fact, I had to travel no further east than Stratford (a.k.a. Oympics Central!) to enjoy my dinner at The Global Feast, a new dining experience scheduled to co-incide with the London Olympic Games and taking place in Statford over the course of 20 nights in July and August.  Curated by Kerstin Rodgers of London’s Underground Restaurant, each of the 20 evenings will see a different world cuisine being served, and each will be co-developed and prepared with a different supperclub chef. Although I feared that on the first day of the London Olympics, Stratford would be absolutely jam-packed with people and impassable, it was pleasantly empty and I easily found the surprisingly tranquil Old Town Hall courtyard where the Global Feast is tucked away in a large marquee tent by a tinkly fountain. The global theme is further developed by the use if a most extraordinary installation as a dining table, called Worldscape. Designed by art and architecture studio Atos, Worldscape is described as a piece of continuous integrated landscape furniture – a table “built from and for the world, carved from its precise contours to provide seating for up to 100 people”.  Intrigued yet?  I certainly was. Luckily creator Alex Haw was on hand to hop up onto his creation and talk us through it. Worldscape uses the Equidistant Cylindrical map of the world, which maps all lines of latitude and longitude as perfectly straight lines with nice, neat 90 degree angles between them, to create an inhabitable dining environment, merging seat and table. The table seems to be made from laquered, multi-layered pieces of wood, painstakingly cut by some clever machine to represent bits of the overall structure, and then numbered for easy(ish) assembly on site – like the worst IKEA nightmare you can imagine. The largest world cities on the map are cleverly represented by conical holes cut through all the layers of the wood and are lit from below the table so as to become “geo-located light fixtures”, and to give you an strong visual image of where our planet is most (and least) densely popoulated. The whole structure is done according to scale, so the tallest pointy bits in the middle of the table are the Himalayas.  According to the blurb, sea level provides the table’s baseline height at its edges.  So all diners eat at the same level, while seated on an integrated seat at the level bathymetric shelf (2000 m below sea level) while the ocean floor tumbles away beneath them and the mountains soar above.

Or, rather, they would… if the table were finished. When I visited about 4 nights into the 20-night run, we were seated on plain old chairs, not an integrated seabed-bench; the Alps had not yet been assembled; the deep valleys that score the planet’s surface were still lying in yet-to-be-assembled pieces on the table and floor rather than suspended under the table, and they were mysteriously assembling a Himalaya 2.0 to replace the first set of peaks. Ah well. I did love the other bits and bobs on the table though, specifically the “mapkins” (bespoke cloth napkins made from beautful map-patterened abric, and the paper pom-poms and flowers everywhere made from old maps.  Glorious attention to detail! So what about the food?  The night that I was invited to attended was billed as Swedish and Northern European night, and the guest chefs were Linn Soderstrom from Hemma Hos Linn supper club in Stockholm and Claudia Stachelhaus from White Room Supper Club in London).  I was greeted on arrival with a cocktail containing chase Vodka (the only potato vodka made in the UK) before wandering off to find my dinner companions Denise and Funda.  The canapés were served as we sat outside by the fountain and were both quite wonderful.  First, there were garlicky shots of cucumber, mint and tarragon gazpacho (fresh, clean-flavoured and perfect for a hot summer’s day); and Skagen Rora (prawns in a sour cream and dill sauce on crispbread from Sweden). These were probably about on a par with, say, heroin for being addictive: plump little prawns, a creamy sauce, and crispbread that tasted buttery and sinful, rather than wholegrain and virtuous. I also loved the pretty, fresh daisy flower on each shard of crispbread. Once we were seated at the table, the rest of the meal was served.  Baskets of Swedish crispbread (2 different types) were accompanied by little bowls of impressively creamy homemade butter. We started with Swedish pickled herring with a 6-minute boiled egg, new potatoes, butter-cooked onions, beetroot and fantastic homemade mayo. I loved every single bite of this plate – from the soft, yielding egg to the earth beets, to the sweet onions, to the sweet-sour tang of the herring.  But best of all was the mayo which I correctly guessed had been made with a hint of browned butter to give it an incredibly caramelly flavour.  Fantastic.  Why is all mayo not made like this??  The starter was well paired with an Austrian Rabl Gruner Veltliner. Our main course consisted of rump steak braised in porter with new potatoes, carrots & blackcurrant jelly, and a creamy porter sauce – evidently Linn’s grandmother’s recipe. Now I would never think to serve rump steak like this – at Cooksister HQ rump steaks go straight on the barbecue or in the cast-iron griddle pan.  But what a delicious way of serving it – think the tenderest pink beef roast you’ve ever tasted and you start to get the picture. The baby carrots it came with were crisply al dente, the porter sauce was rich and creamy and I am a sucker for sweet jellies with meat.  Although not a dish that screams “Sweden” to me, this was nonetheless delicious. The pre-dessert was not listed on the menu and initially had us scratching our heads.  We were expecting a baked German cheesecake with berries; what arrived instead tasted more like, well… ice-cream with berries. Had they forgotten to bake the cake?  Or was the German concept of “baked” something entirely diffreent to ours??  But the waitress soon solved the mystery by informing us that this was a pre-dessert of ice-cream with caramel and berries. I loved that the ice-cream tasted like the caramel ice-cream my mom used to make with sweetened condensed milk, and the tart berries provided a good, tart flavour balance. This was followed by the actual dessert of a baked German cheesecake. And what, you may ask, distinguishes a German cheesecake from other cheesecakes? Mostly the fact that it is made using quark rather than cream cheese – but in this case also that it came on a plate comprising the colour of the German flag: red strawberries, a black parcel of chocolate fudge, and a golden Haribo medal. Clever! The strawberries were lusciously good and the cake’s consistency was definitely lighter most baked cheesecakes – but I still prefer the dense heaviness of a New York style cheesecake. Aftre dinner there was also some entertainment in the form of an acoustic set by German singer songwriter Gon von Zola (The Budda Cakes), whose music I rather liked. And the verdict? On the positive side, I really enjoyed the evening.  I loved the venue and the novelty value; I loved the attention to detail that Kerstin has put into the tableware, from the “mapkins”, to the plates printed with a bird’s eye view of the River Thames and a relief map of London, to the paper flowers made of maps. The food was of a high standard throughout; I simply adored the canapés and starter;  and I like the concept of dining, then chatting ofer a glass of wine while enjoying some live entertainment. On the negative side, I remain baffled and slightly disappointed at the incomplete Worldscape table – I do hope they have a chance to assemble it fully before it is broken down and auctioned off on the final night of the Global Feast. I also don’t know why it was left until the dessert course to turn on the under-table lights – these instantly gave the room an other-worldly and intimate atmosphere.  But mostly, it is a pity that the event was not better attended.  On the night that I visited, the 80-seater table was barely half full, and by the time the entertainment started there were barely a dozen people left.  Whether this is because of lack of advance promotion or because of the “Olympic ghost town effect” (Londoners avoiding their own city in droves after being put off by scaremongering about traffic/transport chaos), I have no idea. But it is a pity to see an enjoyable event which has obviously taken a huge collaborative effort to put together so under-appreciated.  I do hope that as word spreads about positive dining experiences, the remaining sessions are better attended. The Global Feast runs every night until 13 August.  Tickets cost £55 45 per person and include a welcome drink, canapés, starter, main course, dessert and wine with your meal (after the meal, there is a cash bar available). Every evening will also include live entertainment themed to match the dinner. Book via the website.

For another perspective on the evening, see Denise’s post. A few extra photos are available in my Flickr album of the evening.

DISCLOSURE:  I attended this evening as a guest of Visit Sweden – thank you very much for inviting me!