You are here: Home / Recipes / Dessert / Grilled nectarines with saffron and lavender syrup 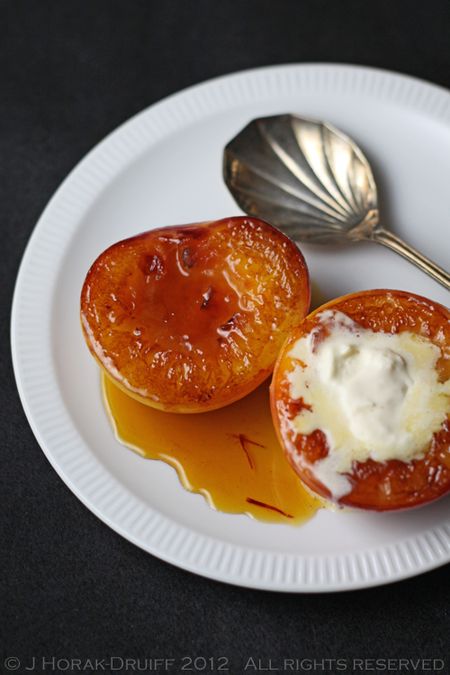 When I first got to the UK in 2000, I embarked on a culinary voyage of discovery.  Suddenly, berries that had cost half a month’s salary in South Africa (or simply weren’t available) were available on every supermarket shelf – and sometimes even available for free in the hedgerows around our house!  The stuff I had always been told was spinach was finally correctly identified to me as Swiss Chard.  I caught my first glimpse of Jerusalem artichokes, Spring Greens and Brussels sprouts sold on stems (also broad beans, although I think this is more because my father refused to eat them so my mother didn’t buy them, rather than their unobtainability!).  I was in heaven.  It took a year or two for the novelty to wear off a little and to start noticing the things that weren’t there:  gem squashes, an abundance of prickly pears or guavas, hanepoot grapes, and yellow cling peaches.  Yup, it didn’t take me long to start pining for South African fruit.

Of course, Outspan oranges have long been known outside South Africa as we have been exporting them for decades.  I was slightly taken aback in 2000 (six years after the demise of Apartheid) when a friend in London told me that many people she knew were still hesitant about buying them because they had grown up in an era when boycotting Outspan was a form of protest against the Apartheid regime.  I, on the other hand, searched the citrus shelves at the supermarket and made damn sure that I bought South African citrus wherever I could. And as soon as the nice middle-class English people realised that they did not have to boycott South African oranges any more, a new reason to avoid South African fruit in England presented itself:  food miles.

The orthodoxy goes something like this:  if I buy a packet of green beans from Farmer Brown who farms on the outskirts of my town, then I am doing the planet a favour.  No carbon emissions from any aeroplane, shop or truck were generated to transport the beans to me, so therefore buying Farmer Brown’s beans is fundamentally a better choice than buying green beans imported from Kenya.  The Kenyan beans obviously had to be flown here, generating a ton of food miles and carbon emissions, meaning that to buy them is to contribute to the demise of the planet. Simple, right?  Well, actually, no.  If Farmer Brown used chemical fertiliser and the Kenyan farm used natural manure fertiliser; or if Farmer Brown used a mechanical harvester and the Kenyan farm harvested by hand; or if Farmer Brown’s beans were first trucked to a packing plant in Scotland before hitting the shop shelves – then the picture becomes far less clear, and many of the benefits of Farmer Brown’s proximity are effectively cancelled out.  In fact, we are increasingly realising that food miles are an overly simplistic measurement of which foods, on balance, harm the planet and which don’t:  you have to take a holistic view of a product’s total environmental impact, from growing it to transporting it to storing it to cooking it.  And that’s before you bring the human factor into the equation. South Africa produces massive amounts of fruit for the (predominantly European) export market.  Being in the Southern hemisphere, it means South Africa’s summer fruits are at their best when the UK is in the depths of winter, making South Africa a popular source of fruit for UK supermarkets.  It’s also the closest southern-hemisphere port to the UK where fruit is grown on an industrial scale, so produce does not travel as far as, say, things grown in Chile.  The other big bonus is that well over 90% of South African fruit is shipped to the UK rather than air-freighted – and shipping is a far greener option.  But most importantly for me, a thriving export market for South African fruit provides considerable direct benefits to the South African fruit farming industry and the national economy.  According to a 2006 study, over one million people in rural Africa are supported by the fresh fruit and vegetable exports to the UK.  In South Africa, a third of a million people are employed in the deciduous fruit industry alone and for every farm worker there are, on average, 4 dependents that rely on the fruit industryto provide education, housing, health and social care. And because growing fruit is a very labour intensive industry that can never be totally mechanised, an increase in the demand for our fruit almost inevitably means an increase in job creation in the growing, packing and supply chain in South Africa – something which the country badly needs. And as European shoppers become more demanding about how their food was produced, this in turn places pressure on South African fruit farmers to improve ethical farming practices, particularly in relation to uplifting the working conditions and rights of farm workers.  In 2011 a number of South African producers and exporters signed up for an ethical trade programme to improve the working conditions of fruit farm labourers, and as a result of the Government’s black empowerment policies there has been some progress (albeit slow!) in providing management and ownership opportunities to previously disadvantaged members of the workforce.  So when I see a South African clementine (a good old naartjie with a fancy name!), butternut, apple or nectarine, I buy it (same as I do with green beans from Kenya).  I figure it’s a small way of investing in a country I love. South African Fruit recently (and very kindly!) sent me a South African stone fruit hamper containing a number of Alpine nectarines and Flavor King plums, both of which are currently on sale in leading UK supermarkets (in fact, I saw no fewer than three different varieties of plums in our local Sainsbury’s last weekend!).  The fruit arrived in perfect condition, cosseted in a bed of shredded paper.  The first thing that struck me as I opened the lid was the scent.  As  child, I remember watching my mom choose her fruit almost entirely by smell – and of course I thought she was crazy!  But now I catch myself doing the same, standing in the fruit aisle with a dreamy expression on my face sniffing cantaloupes for a whiff of ripeness; or clementines for the first whiff of citrussy decay (which means at least one of them has a hidden bruise and will dissolve in a mass of mildew in my fruit bowl in a matter of days!).  Most supermarket fruit, though, smells of nothing – but not these babies!  The nectarines were positively perfumed.  I was already in love.  Most of the plums, I ate raw before I could stop myself.  Flavor Kings are actually pluots – a hybrid between an apricot and a plum, with firm yellow flesh that darkens to pink and red as it ripens – and they have a sweet, intense flavour.  Delicious.  The nectarines were similarly firm and not spongy or tastless as they can sometimes be.  Nick declined to have his any other way but raw – but I had other plans for mine.  I still have some of the culinary lavender from Delices du Luberons that was sent to me by the Vaucluse Tourist Board  in Provence, and I had been wanting to make something with a saffron syrup ever since my saffron epiphany at Restaurang Familjen in Gothenburg last year – and this was my chance.  The recipe is super-easy and quite breathtakingly delicious.  Because it is verjuice-based the syrup is not nearly as sweet as you think.  In fact, if you have a sweet tooth, I would say make it as I did with half water, half vinegar/verjuice, or add extra sugar.  It’s a perfect standby for an impromptu dessert when you are too lazy to do anything fancy, it’s naturally gluten-free – and it looks gorgeous! A plate of South African sunshine on a grey London evening. DISCLOSURE:  The nectarines were free samples provided by South African Fruit; and the lavender flowers were a free sample provided by the Vaucluse Tourisn Board in Provence.