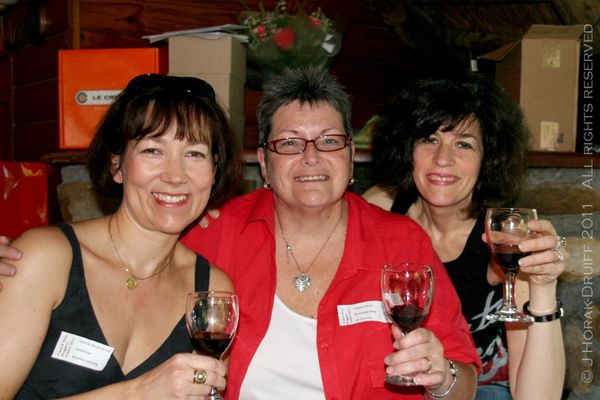 As I pointed out in my post on Wednesday, I believe deeply and passionately in blogging as a manifestation of the right to freedom of expression; as a deeply fulfilling creative outlet; and as a living testimony to the Internet’s power to create and sustain communities of people with shared interests and goals.  And as an ardent supporter of the idea of blogging as a commnity activity, I am naturally a huge fan of the South African Food & Wine Blogger Indaba, which took place for the second time in Cape Town in March this year.

This event brings together food bloggers, wine bloggers and (gasp!) even traditional media writers under one roof for a (conflict-free!) day of presentations, demonstrations and workshops.  The Indaba is the brainchild of my dear friend and blogMamma Colleen who called me one night late in 2009 and asked whether I thought food blogging conference was viable in South Africa.  At that stage, the community was still relatively small but I enthusiastically agreed that it was a great idea and a few months later I was in Cape Town to speak at the inaugural Indaba in 2010.  I don’t know how Colleen did it but this year’s Indaba was almost twice the size and took place at Monkey Valley, a luxury resort is situated in one of Cape Town’s oldest Milkwood forests, directly below the famous Chapmans Peak drive and overlooking the stunning 8km long, white, sandy beach of Noordhoek.  Surely this is the best view ever for a food blogging conference?? The day of the Indaba dawned bright, sunny and perfect – and I was on a high, fresh off the London plane, buzzing with adrenalin when I arrived at the venue to see loads of familiar faces and a host of new ones.  As a last-minute surprise (hah!) Colleen informed me that the master of ceremonies for the day had been taken ill and that I was to step into her shoes – which meant that soon I fond myself welcoming the close to 100 attendees and introducing the keynote speaker who was…umm…  me!  My hour long presentation seemed to fly by, running through my top ten tips for being a better blogger (and fitting in a naughty joke or two!). Up next we had presentations from: Jane-Anne Hobbs who unveiled her plan for South African food bloggers to achieve world domination, as well as some excellent recipe writing and editing tips; food magazine editor Abigail Donnelly and prolific cookbook author Phillippa Cheifitz recounting how they got their writing careers started; Michael Olivier on wine tasting vocabulary; some information on Karoo cooking courses from African Relish; and Andy Fenner on how to build your brand and promote your blog. Lunch was a casual buffet – sadly, not a culinary highlight.  Surely if your venue is playing host to a hundred food bloggers you could rustle up something a little more exciting than the limp fries, tedious chicken patties, and peculiar salads?  Apparently not.  Ah well. At least lunch provided me with a chance to socialise and chat to the charming Paul from Yuppiechef, swap London stories, and tell him a few rude jokes (as you do!); to Candice the Pesto Princess herself (royalty don’t come more royal); as well as Marisa, Hila, Rosemary, Ilse, Nicola, Ishay, Thuli, Alida, Tandy, Cathy, Sam, the dashing Dusan and many others.  After lunch it was a case of no rest for the wicked as I went immediately into the writing workshop that I was presenting together with Jamie (who joined us all the way from France).  Participants were slightly surprised to find themselves describing an eggplant as Reubens-esque; or realising that most of their descriptive terms for chocolate related to emotions rather than taste – but I do believe that everyone enjoyed and benefitted from the creative energy in the room.  Minutes later, the writing workshop people had left and the room was filled with new delegates, this time for my “photography 101” workshop.  F-stops, AWB (no, not the lot in khaki!), shutter speeds and ISO were all demystified before I let participants loose on some food and props to put into practice what they had learnt.  Elsewhere, delegates took part in food styling and advanced photography workshops with Nina and Sam; a beer tasting workshop; a wine and food matching workshop; and a spectacular display of sabrage (cutting the top off a Champagne bottle using a sabre – I kid you not!).  My only regret is that, because I presented two workshops that afternoon, I was not able to attend more of the sessions as a delegate. The day was rounded off with a charity auction in aid of Nosh 4 Noah and then we all decamped to the deck (the one with the spectacular sea view!) where we had sundowners and were treated to the sounds of Matt playing the guitar and singing – talk about a man of many talents! It was wonderful to be able to chat and socialise with all the people whom I knew from their blogs, Twitter and Facebook, and to compare notes and share a laugh.  The day had been pretty ambitious in terms of scheduling, and fairly intense in terms of the amount of information packed into a short time.  I do believe, though, having attended similar conferences in London, that the Indaba is world-class in terms of quality content and that it offered value for money to both newbie and established food bloggers.  To Colleen I can only offer a huge THANK YOU for once again putting her life on hold to concentrate on pulling together this wonderful event; and for giving me the opportunity to speak. And to the rest of the food bloggers and friends who attended the Indaba, I have to say that it was a tremendous pleasure to meet as many of you as I did, and I am privileged to call you my friends and colleagues.  You rock! For a few other perspectives on the Indaba, you may want to read Cathy Marston blog, Spatula by Yuppiechef, Sous-Chef, Drizzle and Dip, The Only Cin (who did a series about the Indba and the products in her goodie bag), The Squashed Tomato, Lavender and Lime who also did a fantastically detailed series of posts on each speaker, Notes from My Nest, Deelishuss, Scrumptious South Africa, Bits of Carey, Koek!, African Relish, Life’s a Feast and of course Browniegirl Colleen who is the beating heart of the SA food blogosphere.  THANK YOU.

And just to whet your appetite… next year’s Indaba is provisionally scheduled for Feb/March 2012 and I can think of no better reason to plan a visit to Cape Town – or, indeed, South Africa (the Indaba represents even more fantastic value for money if you are paying in foreign currency!).  Keep an eye on the Food & Wine Blogger Indaba website for news of the next event.  And if the stellar line-up of speakers did not persuade you, take a look below at what I found in my bulging goodie bag – thank you to each and every generous sponsor who made the day possible! Nougat from Wedgewood; chocolates from Madécasse Beers from SAB (husband had already drunk the bottles of MGD, Castle Milk Stout and Pilsner Urquell before I could get a pic!); BOS iced tea; Primitiv vodka Stock concentrate from Ina Paarman; Eat In, Eat Out and Taste magazines

« Food blogging: the state of the nation and some thoughts
Saturday Snapshots #152 »