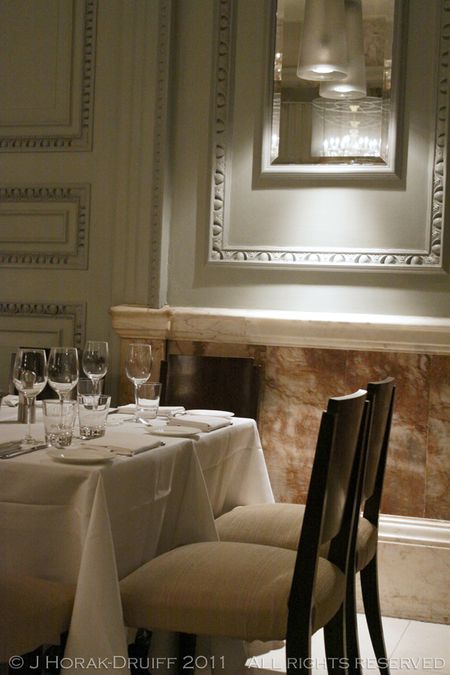 I never quite understand why some people do not like eating out.  Me?  I’d eat out every day and twice on Sundays if money and time (and husband!) permitted.  I love the sense of occasion; I love walking into beautiful rooms full of twinkly lights and tinkling glasses; and I love eating food that I do not have the energy/inclination to make in my own kitchen.  And I love not having to wach up a single dish afterwards!  Catch restaurant and Champagne bar at the Andaz Hotel ticks all these boxes and more, so when Michelle  invited me to join her for a review meal there, I leapt at the chance.

The Andaz Liverpool Street is one of the original London railway hotels which opened as the Great Eastern Hotel and is housed in a beautiful redbrick Victorian building dating back to 1884.  The inside, though, is anything but dodgy Victorian, with state of the art rooms and top class facilities, including five retaurants and bars.  Catch is the formal seafood restaurant among the bunch and I have to say it is a devastatingly attractive space. You can either make your way through the buzzing Champagne bar and descend a rather grand marble staircase into the restaurant, or you can access Catch directly from the street via a door on the Bishopsgate side of the hotel.  Ceilings are high and lighting is flattering (although tricky if you are trying to photograph food as Michelle and I were!!), but the outstanding feature is an (original?) and  beautifully backlit stained glass window which forms the backdrop to the bar counter where piles of fresh crustacea is enticingly displayed on platters of crushed ice.  Although the room was emtpty when we arrived for lunch, within 30 minutes it was buzzing with a array of guests that made people-watching a riveting passtime for me.

Soon we were settled at our table, looking at the menu and drinking the first of a couple of cocktails that we would try during the afternoon.  Michelle had a Bison Delight (Zubrowka vodka, passionfruit purée & Champagne); another with Midori and apple of which I did not note the name; and a Naughy Peach (Créme de Peche, Amaretto, apricot purée & Champagne) – my favourite.  I played it safe with an excellent raspberry moijito and later a glass of New Zealand Sauvignon Blanc.  There is a small selection of wine buy the glass; and impressive list of Champagnes and dessert wines; and a balanced wine list including both Old and New World options and a good choice in the £20-£40 price range. The sommelier was excellent as was the mixologist – Michelle had cocktails as opposed to wine with her meal, and he came to check each time what our next course was and then recommended a cocktail that would complement it. If the wine list presented few challenges, the menu was another matter altogether.  We looked, we debated, we agonised, we looked again.  Ten, twenty minutes passed and we were no closer to a decision.  It’s the kind of agony of indecision that spells “great menu” to me. Eventually we settled on a compromise – a dozen oysters, done two ways, plus another starter – so at least we got to try three different things on the starter menu!  Our oyster feast consisted of six Crispy Fried Oyster Tempura with a sweet soy sauce; and six Raw Oysters with Chorizo (£24 for a dozen). The tempura oysters were lovely, barely cooked; coated in the crispiest, feather-light batter; and garnished with pretty micro greens.  But oh, the oysters and chorizo…  This was the stuff of oyster-lovers’ dreams.  The oysters themselves were outstanding – big, creamy and substantial (English Maldon oysters, I was later told) – and beautifully shucked with not a hint of grit. Into each shell had been spooned a warm dice of chorizo, fried just until the red oil had been released; and the whole lot had been topped with a thin slice of crisly fried chorizo.  The combination of cold, creamy oyster and spicy, warm chorizo is something truly sublime – my tastebuds had arrived in Nirvana. Our other starter was plated to look somewhat like a Joan Miro canvas and contained Seared Yellowfin Tuna and Marinated Tuna Tartare with Watercress Mousse and a Soft-Boiled Quail Egg (£14.00).  The tuna tartare had been marinated in a teriyaki-like sauce which worked perfectly with the fatty meat. But it was the seared cube of tuna that really caught our attention.  It had been coated with some sort of spice prior to being very lightly seared – at first glance it looked like black sesame seeds mixed with black pepper.  But once we tasted it, it became obvious that this was something else entirely:  there was no peppery heat on the tongue initially, but once you had chewed and swallowed, it seemed as if the tastebuds on the sides of your tongue suddenly heard a thumping dance beat and started partying like it was 1999.  It was the most extraordinary tingly feeling, to be followed by an almost coppery aftertaste.  We were intrigued and baffled by every bite until the very charming head chef Martin Scholtz came out to chat to us and solved the mystery:  Sichuan pepper.  Another sublime dish that I will remember for a very long time. As is often the case, main courses were less revelatory but nonetheless beautifully executed and plated.  I opted for the Crispy-skinned Anglesey Seabass on Pasta with a Morel Sauce and Braised Hearts of Gem Lettuce (£23.00).  The skin was crisp to perfection and the flesh just cooked.  The sauce was creamy and rich without overwhelming the fish and made me wonder why I do not serve mushrooms with fish more often.  Michelle had Pan-fried Turbot with Dijon Mustard & Tarragon served with White Asparagus & Spring Onions (£24.00) and we shared side orders of Pak Choi with Chilli; and excellent hand-cut chips. Although I had had plenty to eat by this stage, it would have been churlish to leave without trying dessert – and the menu once again presented a dillemma of choice.  In the end, I opted for something light and fruity in the form of a caramelised apple parfait topped with apple mousse and served with apple sorbet, diced apple in caramel sauce, and an apple crisp (£8.00).  If it was not called the Apple Extravaganza, it should have been!  It was utterly delicious too – the caramel lent a depth of flavour to the appley overtones in the parfait and the mousse was feather-light (like unbaked meringue); the sorbet was palate cleansing; and the apple dice and crisp added crunch.  Gorgeous.  Even so, I still felt a twinge of menu envy when I saw Michelle’s white chocolate tart with cocoa sorbet, and caramelised tangerine segment with saffron (£8.00).  The cocoa sorbet was not too sweet and together with the tangy tangerines, it formed the perfect balancing act with the rich, sweet chocolate tart.  It was also a visual treat – particularly those little strands of saffron!

The staff were among the nicest I have come across in a while – assured and professional without being snooty; and engaging and personable without being over-familiar.  Any queries we had about the menu or particular dishes were answered fully and all the drink recommendations turned out to be excellent.  As I mentioned, the room is gorgeous and the people-watching unparalleled.  Stepping back out into the bustle of Liverpool Street station was a particularly harsh return to reality!  If you have a special occasion to celebrate in the City, I can think of few more glamorous places to do so – or if you only want to pop in for drinks and snacks, there is also a good tapas menu available in the Champagne bar.

Thank you to Catch and the Andaz Hotel for arranging and sponsoring our visit.  For another perspective, click here to read Michelle’s review of the meal.