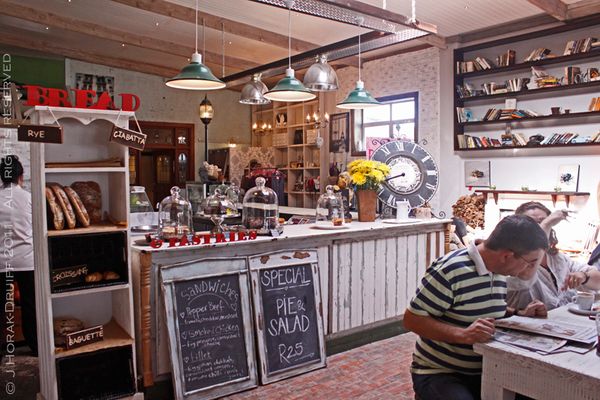 Some people were born with blue eyes. Some people were born with blood type O. Some people were born with their ring finger longer than their index finger. Me? I was born with a high RC factor – resistance to change. I get it from my father, who manifested this factor all through his long life. I get teary when a tree I’ve known for years gets cut down. I go to the same hardresser for decades. And I think back with nostalgia to the little shopping centre near my childhood home where we used to be able to get fresh produce from Rathmead Farm Stall; Mickey Mouse comics from CNA, groceries from Checkers, and the Sunday papers from the Greek café on the the corner. These varied stores have been replaced by a liquor chain store and a soulless DIY chain store, which to me just goes to prove how much change sucks. But Winston Churchill said: “There is nothing wrong with change, if it is in the right direction.”

One off the oldest suburbs in Port Elizabeth is Richmond Hill, home to little settler cottages built by the English in the early 1800s.  Although the houses are among the prettiest in the city, with period features and wooden floors and (in some cases) a view over the harbour, they are neither the largest nor the newest, and as the city expanded, the wealthy resident moved out to the suburbs, leaving Richmond Hill to the students and first-time buyers who could afford to buy there.  By the 1990s, many of the properties were occupied by tenants rather than owners and many of these tenants were none too concerned with caring for the houses,  being far busier running shebeens (illegal drinking houses) or other illicit businesses from the properties.  RIchmond Hill became the kind of place that you’d mention and people would shake their heads, saying: “Such lovely cottages… but it’s just not safe to live there any more”, and people assumed that it would gradually just become a no-go zone like so many CBD areas before it. But then came… a change.  People started realising that the kind of period features available in Richmond Hill are unique and no new-build in the suburbs can replicate them.  Tired of endless traffic and commuting, people also realised that living closer to town might not be such a bad idea.  And above all, business owers started seeing the potential in converting some of the houses to businesses and reclaiming the area from its more recent unsavoury occupants.  One of the best examples of this sort of regeneration of the area is Stanley Street, formerly home to a few tired shops and offices, but now a smorgasbord of hip restaurants and bars. Every time I visit Port Elizabeth I am amazed by the new places that have sprung up like mushrooms along this street, and one of the latest is the Deli Street Café.

The concept is very appealing.  First there is the New York loft-style space with exposed brickwork and an eclectic decor that includes things like street lights to recreate the feeling of eating al fresco in New York or Paris, with more tables outside and a bar counter by the window for those dropping in for a quick cup of coffee.  Then there are the quirky nooks and crannies where you can perch and survey the scene from antique couches and benches; the fresh flower market in one corner; the small boutique in another corner; and of course the bakery counter where the fresh breads and pastries baked on the premises are sold. Visiting feels like taking a little minibreak to another country – certainly not the old Stanley Street that I was used to! Before we had even ordered, my eagle-eyed sister-in-law (who has clearly been here before!) spotted that there was only one four-cheese muffin left under the cloches on the bakery counter, and promptly ordered it for us to nibble on while we chose our breakfasts.  I have to admit that it was the right thing to do.  The muffin is indecently good – a full flavoured and cheesy crumb concealing its secret centre: a decadent blob of mascarpone baked into the middle.  My only regret was that I could not have one all to myself – but there is always next time 😉 The breakfast and lunch menus read like a roll-call of classic café dishes from around the world:  Salade Nicoise from France; hot pastrami on rye from New York; and Camden Town falafels from London.  The breakfast menu (which we chose from) includes temptations such as a selection of bagels or pastries, and variations on the theme of traditional cooked breakfasts with a twist, like pancetta instead of bacon or ciabatta instead of plain old toast.  We opted for the Gentleman’s Brioche (poached egg, Emmenthaler cheese and creamy hollandaise sauce on toasted brioche with roasted Roma tomatoes and basil on the side) and Smoked Salmon on Sloane Square (Norwegian smoked salmon, Peppadews and olives chopped into creamy scrambled eggs on toasted ciabatta, with wasabi mayo on the side).  Both were wonderfully tasty and flawlessly executed.  I particularly loved the tang that the Peppadews lent to my scrambled eggs, and the fact that the ciabatta was toasted to perfection – not rock hard and tooth-shattering like it can sometimes be.  The coffee was excellent and the service friendly and efficient.  The Deli Street Café is a great place to meet friends for an informal breakfast or lunch; or to relax over a newspaper with a pastry and a coffee, while feeling momentarily transported to New York or Paris (without the tedious flight or visa hassles!)

I may still not be a huge fan of change, but the transformation of Stanley Street and the rise of places like the Deli Street Café is definitely a change in the right direction.