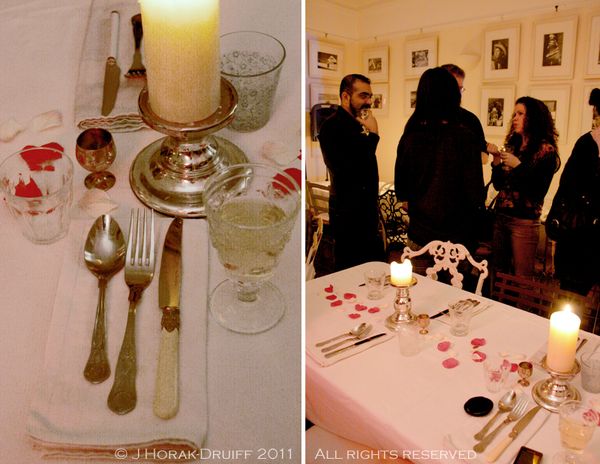 [Apologies in advance for the grainy pics – taken in near-darkness!]

Nobody has ever been able to accuse me of being on the cutting edge of anything. Fashion is generally something that I have only the most fleeting acquaintance with:  I prefer to find a style that suits me and stick with it.  I have changed my haircut once in 40 years.  Less than a year ago I said publicly that I could not see the point of Twitter (!). And despite the frenzied interest in underground restaurants, until about ten days ago, I had not been to one despite living in a city that is positively teeming with the things. For those of you who are even further removed from the cutting edge than I am, an underground restaurant is not some sort of Hobbit-like burrow cafeteria; nor does it involve eating in the trains and tunnels of the London Underground.  Underground restaurants (or supper clubs) are eating establishments that are run out of somebody’s private home, rather than traditional restaurant premises – in effect a paying dinner party.  They may or may not operate within the usual licensing laws and table arrangements are usually such that you share your table in soebody’s lounge with people that you do not know.  The food can range from really very basic to really quite posh (remember when Nuno Mendes was still doing the cooking at his Loft Project?) and the price varies accordingly. One of the stalwarts (if not the epicentre!) of the London underground restaurant scene is the irrepressible Kerstin Rodgers, better known as Ms Marmite Lover (pictured above left), who runs the simply titled Underground Restaurant in Kilburn, north London.  If I was going to start experiencing underground restaurants, what better place to start than there? The occasion was a special screening of the Eat, Pray, Love DVD that had been arranged ahead of its release on 7 February.  Guests included lifestyle & travel bloggers, journalists as well as a few of my lovely food blogging friends:  Michelle, Sarah, Niamh, Helen and newbie Hannah.  And, of course, Julia Roberts, albeit on the giant screen that had been erected against one wall rather than at our table!  I loved the candlelit “dining room” instantly, filled as it was with shabby chic mismatched chairs, an ornate gilt mirror on which the menu was written, gorgeous framed photographs, and beautifully laid tables.  I particularly loved the romantic feel of the table settings with their strewn rose petals, sparkly glasses and intriguing details (like salt served in a little silver liqueur glass).

If you have read the book or seen the movie, you will already know that Eat, Pray, Love is the story of a successful thirtysomething American woman who suddenly has what can only be described as an early mid-life crisis, leaves her husband and goes off travelling to find herself (and, of course, true love along the way).  She travels first to Italy (where she “learns how to eat”; then to India (where she finds spirituality); and finally to Bali, where she finds love.  People had told me that the book is life-changing – but if the DVD is anything to go by I seriously doubt this.  Not that it is a bad movie, but a) it is rather hard to feel much empathy for the protagonist, who seems to be desperately unhappy for reasons no more concrete than what I feel every morning on the Central Line at rush hour (!); and b) the scene where Julia Roberts, having apparently eaten only one small bowl of spaghetti and a gelato in Italy, struggles to get into a pair of jeans (puh-lease – what were they?  Age 8-9 size??) is simply laughable.  But on the other hand, there are some lovely travelogue shots and you do get to see chunka hunka Javier Bardem and James Franco in action – so probably a good movie for chick flick night with your girlfriends over a bottle of something bubbly. The food for the evening (all of which was vegetarian) had been themed to fit in with the movie – meaning that we started in Italy, moved on to India and ended in Bali.  The starter, probably my favourite of the night, was pizzete (like mini pizzas) topped with various cheeses (including a fabulous white truffle cheese) and deeply flavoured oak-smoked tomatoes.  Wonderful. The main course consisted of two vegetarian curries served on basmati rice.  The first (pictured above) was a fruit, nut and aubergine curry which I loved – but then I am a sucker for anything studded with whole almonds and sweet sultanas (I think!).  I also particularly liked the toasted coconut on top which I could easily consume in vast quantities!  The second curry was described by Kerstin as “experimental” – an egg and coconut curry featuring whole hard-boiled eggs.  All I can say is that the experiment was a success 🙂  The curries were accompanied by a cooling cucumber, coriander and pomegranate salad, and some gorgeous home-made lime pickles.  My other favourite was dessert:  a quarter pineapple, grilled and then baked with a chilli syrup.  And alongside it, a scoop of indulgent coconut and rum ice cream – think frozen cocktail.  (Sadly, though, I did not get a usable snap of the pineapple – check out Ms Marmite Lover’s own blog for some lovely pics.)  Wines were provided by Ten  Green Bottles.

Here are some other accounts of the evening from Hannah and Sarah.

Thanks to Kerstin for a wonderful meal, and to Sony Pictures Home Entertainment for sponsoring the event. Eat Pray Love is rated 15 and now available for £19.99 for the DVD and £24.99 for the Blu-ray. For a calendar of Underground Restaurant events, prices and bookings, click here.  Supperclub: Recipes and notes from The Underground Restaurant by Kerstin Rogers is due out this April and is available on pre-order.

It is with great pleasure that I announce the 2011 Food and Wine Blogger Indaba! This event was held for the first time in 2009 and I will be speaking as well as leading workshops on kickstarting your writing (together with my talented friend Jamie) and photography at this year’s event in Cape Town THIS SUNDAY!  Bookings are streaming in and tickets are selling fast – so if you are a food or wine blogger or if you are interested in becoming one, the Indaba is the place to be on 20 February 2011. Book now!