You are here: Home / London food blogger events / A beer and seafood pairing evening at Liberty with Bittersweet 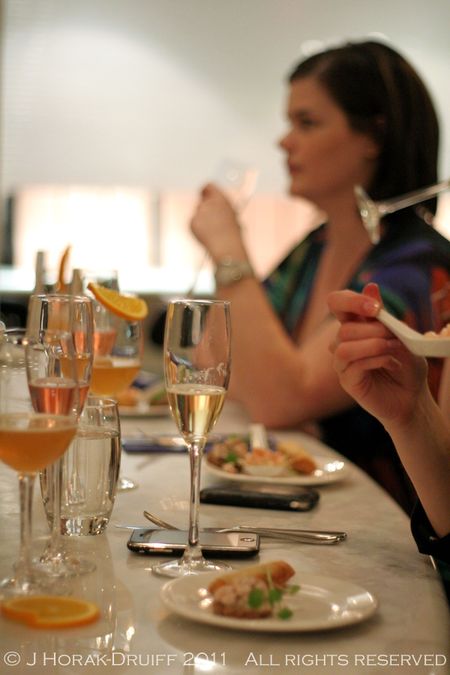 There is nothing like a canter through your blog’s drafts folder for reminding you just how badly you have fallen behind with posting about events you have been to. The list of “yet to be blogged” events includes the fab Wines of South Africa FIFA World Cup event in the summer; the London International Wine Fair; an evening at The Loft Project with Le Quartier Francais and Moreson wines; the Clarence Court eggs dinner at Hix; and a host of restaurant reviews like Bar Battu, Vinoteca, Bistrot Bruno Loubet, and St John.   Overwhelming!  But as they say, the journey of a thousand miles starts with a single step.  So at random, I chose the Bittersweet Partnership’s beer and seafood  matching event at the Liberty champagne & oyster bar in September, timed to coincide with the start of oyster season.

Our host for the evening was the knowledgeable and charming Rupert Ponsonby who was to guide us through a series of beer tastings matched with seafood canapés.  We kicked off with Kasteel Cru (a dry lager brewed in Alsace that bears a distinct resemblance to a dry champagne).  Its fine mousse and almost brioche-like flavours were paired with a canape of brown shrimps and lemon mayonnaise on nordic seed bread – a sublime combination that made the shrimps taste sweet and nutty.  This was followed by Kasteel Cru Rose (a similarly fine mousse, delicate pink colour, hints of elderflower & lovely clean finish) which paired beautifully with mini prawn coctail spoons.  And the third part of the trio came in the form of Blue Moon, an unfiltered Belgian-style wheat beer that uses coriander and orange peel in the brewing process to add flavour.  I loved the citrussy nose and palate and the fact that there was almost none of the bittter after-taste that I usually associate with beer.  Matched with a delicate crab and ginger spring roll, it was an unexpected treat – I would love to try this with a variety of Asian flavours! The second set of beers was led by some Coors Light.  I have to say, this was not my cup of tea – watery and with almost no finish, it was everything you fear a light beer will be.  And it was no match for the rather yummy chilli squid risotto balls that were served with it. Far, far better and probably my favourite discovery of the night was the utterly delightful Innis and Gunn Original.  This beer is brewed in Scotland and is matured in whisky barrels made of American oak, giving it a nose redolent with caramel and melted butter, and a rich caramel palate with a clean finish.  It was love at first sip for me.  And pairing it with plump seared scallops wrapped in pancetta somehow brought out both its sweetness and its smokiness.  My tastebuds were swooning. The last beer in this set was the Brakspear Oxford Gold from the Brakspear brewery in Henley-on Thames.  This had a lovely full fruity flavour and golden colour – a good match for the shot glass of razor clam and mussels barigoule (a creamy tomato sauce). The last round of tasting featured the raisons d’etre of the entire evening:  the oysters! We were treated to Irish Carlingford Lough; French Prestige ‘Speciale de Claire’; English Colchester Rock; and English Malden Rock and they were all surprisingly and delightfully different. My favourite by a country mile were the Carlingford Loughs – a rich creamy taste that seriously impressed both me and Nick.  The French oysters were also good and creamy, if a little saltier.   The Colchesters were insanely briny – almost Marmite-esque; and the Maldons were similar although less noticeably briny.  The beer matches were Kasteel Cru (again); Duvel (an exceptionally aromatic and alcoholic Belgian Strong Golden Ale); Brakspear Bitter (another beer from the Henley-on-Thames brewery with a rich amber colour – but too bitter for the oysters in my opinion); and Marston’s Oyster Stout (a rich dark and exceptionally creamy stout with spicy, floral and fruity notes – devastatingly good with the robustly salty English oysters). And the final part of the evening was a fun cooking demo where we were all encouraged to make our own beer batter with Blue Moon – a really simple recipe but a LOT of hard work if you have to whisk the batter into shape by hand!  But we were rewarded for our efforts with perfect hot, crispy fish goujons and chips, in little newspaper cones. The Bittersweet partnership was formed to challenge the idea that beer is not a drink preferred by women, or a good match for delicate food.  Think about it – how many women do you know who order a beer when they go out for a meal rather than a glass of wine?  And even more so when they are eating seafood!  Bittersweet has set about trying to change that and I have to say that this sort of event is an excellent way of doing so. All the beers were interesting and unusual, and clearly a lot of thought had gone into the beer and food matches.  I have subsequently tracked down and bought myself some Kasteel Cru and some Innis and Gunn and I encourage you to do so too!  Prepare for a beer epiphany.  Thank you to Bittersweet for an informative and fun evening!

It is with great pleasure that I announce the 2011 Food and Wine Blogger Indaba! This event was held for the first time in 2009 and I was honoured to be asked to speak.  The good news is that I will be speaking again and hosting workshops on kickstarting your writing and photographyat this year’s event in Cape Town!  Bookings are streaming in and tickets are selling fast – so if you are a food or wine blogger or if you are interested in becoming one, the Indaba is the place to be on 20 February 2011. Book now!