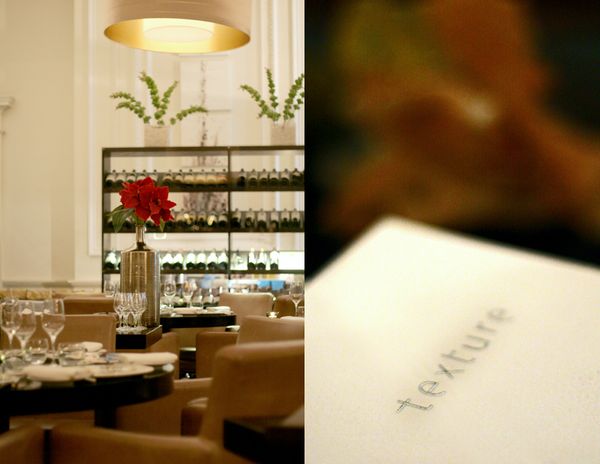 I love my friends.  I love them for their support and their sense of humour in a crisis; for their wisdom and their empathy when I need advice; for their generosity and their graciousness… but I love them especially when they call me up and say those magic words: “Do you want to come and review a restaurant with me?”.  So obviously when my good friend Michelle of Greedy Gourmet uttered those words, I showed my love for her by graciously and immediately accepting her invitation!

The restaurant in question was the Michelin-starred Texture, the brainchild of French-born sommelier Xavier Rousset and Iceland-born chef Agnar Sverisson, who has previously worked at Petrus and Le Manoir aux Quat’ Saisons.  The restaurant’s cuisine is described as modern European but there is definitely a leaning towards Icelandic ingredients and, unusually, the savoury dishes are all made without the use of butter or cream.  We arrived there on a rainy evening a week or two ago and kicked the evening off with a drink in the Champagne bar.  I loved the bar area with its high windows and chairs upholstered in (what else?) Champagne-coloured fabric, and its funky tables with a built in central ice bucket to keep the bubbly chilled.  Genius.  Michelle and I skipped the Champagne and went instead for cocktails (in my case a luxury moijito, made with Champagne).  But the highlight of our bar experience was undoubtedly the bowl of bacon popcorn served as a bar snack.  There has been much discussion between me and Michelle as to how this was made, but suffice to say that it was hands down the best bar snack we had ever eaten – so much so that we brought the rest of our bowl to the table with us rather than abandon it in the bar when we were seated! Once we were comfortably seated in the restaurant area (a handsome, high-ceilinged space), still clutching our bowl of bacon popcorn, we had a chance to peruse the menu.  Other than the standard a la carte options, there were also three seven-course tasting menus: a standard one, a fish-only one and a vegetarian one.  We both plumped for the standard tasting menu which kicked off with an unusual appetiser of a plate of crisps.  No, we’re not talking Pringles here – this plate consisted of free-form Parmesan crisps, salted cod skin crisps, some root vegetable crisps and slivers of crisp bread, served with a barley, dill and yoghrt dip.  All the crisps were good (including the rather surprising cod skin ones!) and the whole plate was visually interesting, but did not excite my tastebuds in the same way as the bacon popcorn!  This was followed by a little shot of Jerusalem artichoke 3 ways: a soup poured over a puree and a dice.  I love Jerusalem artichokes, so this seemed to be a no-brainer for me, but I did not like the fact that it was served cold.  Still, its use of three textures of the same flavour set the tone for much of the textural playfulness that was to follow.  To accompany it, there was a chunk of outstanding brown bread and English butter blended with Icelandic sea salt and seaweed. The first “proper” course was a plate of new season English beetroots, goat’s cheese oats and mizuna. The gorgeous aquamarine glaze of the bowl this was served in made this a particularly attractive dish, with its crimson beets and pretty pansy flowers.  The goat’s cheese took the form of an unusual goat’s cheese granita (reminsicent of the squid ink granita that I had at Viajante).  Despite my ambivalence towards beetroot, I loved this dish – the earthiness of the beets and the tang of the goat’s cheese worked perfectly together.  Following that came the chargrilled Anjou pigeon with sweetcorn, bacon pocorn, shallots and red wine essence – another success.  The dish contained two bits of pigeon: the breast and the leg – with claw still attached!  Now I love pigeon but I can imagine that this might be an off-putting detail for some!  But that aside, this was a lovely dish – the breast was magically pink and rare; the chargrill on the leg was just enough to add flavour; and of course there was the bacon popcorn! This was followed by my favourite dish of the meal: Icelandic lightly salted cod with barley and shellfish jus.  This fish was cooked to perfection – crisp on the outside (despite being cooked without the skin!) and flaky and moist inside.  It was perched on what seemed to be a barley risotto made with the shellfish jus and studded with fragments of toasted nuts which was pure heaven – I could have devoured a whole soup bowl of this. The meat course was grain-fed beef ribeye, chargrilled ox cheek with horseradish and olive oil bearnaise, and chips on the side.  The ribeye was tasty and perfectly rare, but the ox cheek… oh, the ox cheek!  A little parcel of meaty heaven – tender enough to eat with a fork and packed with deep, satisfying flavour. The chips were excellent and the horseradish was (I think) fresh and a world away from the normal stuff you buy in the supermarket.  Not sure about the olive oil bearnaise though.  I have a sneaky suspicion that bearnaise is one of those things that really, truly needs real butter… Pre-desserts are often disappointing little things – a sorbet here, a morsel there.  This one,  however, was a stunner:  rhubarb granita with a sabayon ice-cream.  Just barely frozen, tart cubes of rhubarb paired perfectly with the creamy ice cream but the whole effect was never cloying or heavy. Perfection.  Dessert, too, was a vision of lovely lightness – mango and pineapple soup and jelly sheets, with basil ice-cream.  Yes, I know it all sounds terribly virtuous, and compared to a chocolate fondant, it probably is – but it was delicious and filled with zingy flavours that left my palate cleansed rather than exhausted. After dessert, we had the optional cheeseboard (at £9.50 per person extra).  The cheeses on offer on the night we visited were: Etivaz (a Comte-like hard cow’s milk cheese from the village of Etivaz in Switzerland); Persille du Marais (an unusual blue goat’s cheese from south of bordeaux) and Petit Cru (a washed-rind soft cheese that was described to us as being like Epoisses – can’t find any reference to it on the interwebs though). These were served with slices of toasted apricot bread, and Melba toast-like crisps of the same bread, as well as celery, a spiced pear compote and a muscadel jelly (which promptly melted and tried to escape the plate!).  I loved all the cheeses but the Petit Cru was the stand-out favourite for me, and it was wonderful with the compote. I also had a glass of sherry, the name of which I did not note.  Mea culpa. Although we did not have coffee, we still got the platter of petit-fours that is usually served with coffee.  The platter contained: chocolate cardamom truffles (home-made I suspect, and delicious); caramelised chocolate sugar strips (these are in the white cup in the pics and were interesting but somehow the ultra-crispy texture prevented you tasting much flavour); mini macarons with a distinctly aniseed flavour (good but unexciting); pistachio madeleines (still warm, crispy outside and nutty inside – a personal favourite); and Fisherman’s Friend lollipops (semi-hard lollipops with a menthol and eucalyptus flavour – weird but good after all the sweetness). The tasting menu costs £65.50 and as I said, the cheese course was an extra £9.50.  We did not have anything off the extensive wine list, preferring to stick to the gorgeous cocktails that were (as I recall) about £9.50 each.  Service was professional and friendly throughout, although sometimes we struggled to hear the dish’s description through the waiter’s heavy accent – but he was happy to repeat it patiently while the 2 crazy ladies took notes! the lighting was cataclysmically bad for photos, but I am guessing this will only be an issue for other food bloggers.  The people watching was extraordinarily good though!  I liked the playfulness of the menu that never descended into a novelty act, and the obviously well-sourced ingredients.  At £65.50, I think a tasting menu of this quality represents good value in London restaurant terms, and although we were told that the table had to be give back in two hours, we lingered for three or so without any disturbance.  I would definitely go back for a special occasion meal – or alternatively just visit the bar for a cocktail and 1kg of that divine bacon popcorn!

Thanks so much to Michelle for treating me!  Have a look at her review of Texture and see if we agree on our favourite dishes.