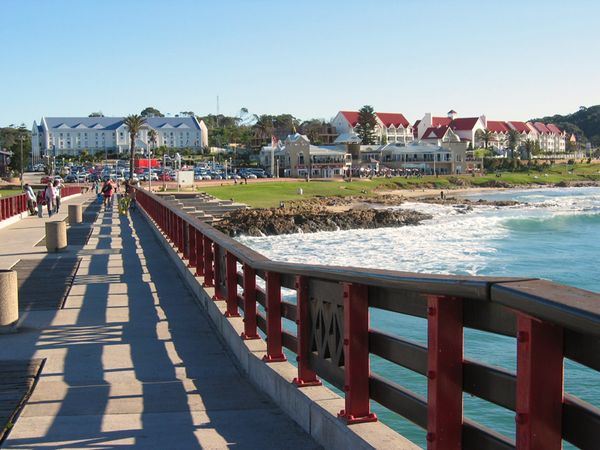 I love my hometown of Port Elizabeth dearly, but one of its strong points has never been customer loyalty.  Other than the odd exception (Barneys, De Kelder and Old Austria spring to mind), restaurants have come and gone as regularly as the weather changes – and anybody who has been to PE will know that the weather changes multiple times per day!  A place that is flavour of the month one minute, with a waiting list as long as your arm, suddenly gets dropped by the trendsetters and is as empty as a nudist’s wardrobe.  A place that survives substantially unchanged for a decade or more and still pulls the crowds is a relative rarity.

Blue Waters Café (the small building almost exactly at the centre of the photograph above) did not start off its life as a restaurant.  Or rather, it did – but as a very different restaurant.  Back in about 1993 or so, the space started out its life as Cadillac Jack’s Rock & Roll Diner, an American 1950s themed diner where the menu included such American classics as buffalo wings, TexMex nachos and Cajun chicken salads.  On Wednesday, Friday and Saturday nights, after dinner service was done, there would also be themed 1950s music and a dancing in the bar area, with the highlight being the barmen and waitresses dancing on the bar counter at one point in the evening.  Unlike most dancing destinations, it attracted a crowd of twentysomethings and older, rather than teenagers, and for a while it was a winning formula.  And then the owners decided to run it as a restaurant by day and a nightclub and bar by night, and do away with the exclusively 1950s music – and it was still a pretty good formula.  it certainly worked on me:  I do believe I spent most of my nighttime hours in the early to mid-90s on the Cadillac Jack’s premises!  But then the owners decided to import local legend Mr Shakes as a DJ and a whole new crowd of far younger and edgier patrons arrived, alienating the crowd that had made the place successful in the first place.  Not long after that, there was a stabbing and it did no take long for the place to unravel and close down. RIP. But the location of the venue was too good to resist and it was not long before another restaurant opened in its place in the mid-90s:  Blue Waters Café, which is still going strong today.  The venue is quite spectacular – a first-floor room with wraparound floor-to-ceiling windows looking out over the sparkly Indian Ocean in Algoa Bay and over Shark Rock Pier (see picture above).  Decor is understated and does not distract from the view, and there is an attractive bar at one end of the room, should you want to pop in just for one of their excellent cocktails.

The menu is the kind of menu that mid-range South African restaurants do so well and that you so seldom find outside South Africa – in other words steak/seafood/pasta menus, where nothing is an obvious weak point.  The restaurant is open from early until late and you can kick the day off there with breakfast – anything from a healthy breakfast of fresh fruit and muesli to decadent scrambled eggs with smoked salmon.  My favourite meal to have there is lunch, when you can enjoy the best of both worlds: the menu and the view.  The a la carte menu can provide you with something as light as tramezzini (try the divine spinach, feta and bacon one) through salads and pastas, all the way to seafood (think kingklip, prawn & chicken curry, and sole), chicken, and meat (including venison Stroganoff, lamb shank and various excellent steaks). My favourite salad (pictured on the right above) was always the crab, feta and avocado salad, primarily because they used chunks of crab meat, rather than crabsticks.  However, the seasonal fluctuations in the quality and availability of avocados sadly seems to have prompted them to take this off the menu.  As an alternative, I’d suggest the also-delicious smoked salmon and asparagus salad.  On the left is an old stalwart that I still love – the Cajun chicken salad, where spicy chicken strips top a crispy salad full of so much more than just lettuce.  Apart from the generous portions, the other nice thing about Blue Waters salads is that they routinely serve the dressing on the side, without having to he asked. When it comes to main courses, there is only one thing that I always crave and order:  calamari florentine.  While most places in South Africa will serve you battered calamari rings, it is less usual to find calamari steak on the menu.  Ordering it can be a bit nerve-wracking, as it might arrive as soft as butter, or it may be so rubbery you could re-tread your tyres with it.  Rest assured, the calamari steak at Blue Waters Café is firmly in the former category, and it comes topped with a creamy spinach, feta and mushroom topping which I find irresistable.

Prices range between about R30-R55 for starters and about R50-R110 (with some premium steak and seafood dishes costing more).  The wine list is fairly brief and springs no real surprises, but prices are not crazy.  Service is usually pleasant and attentive and you can’t go wrong with their cocktails priced at just over R30 each.  Blue Waters used to be one of my favourite lunch venues when I lived in PE and I still make a point of paying a visit each time I am in town, whether for a cocktail or a meal.   The food is consistently good, the view is always lovely – and if they have survived in my fickle town this long, clearly they are doing something right!

And don’t forget to get your barbecue and braai recipes to me by 23 September for the Braai, the Beloved Country event to celebrate South Africa’s Heritage Day this month!