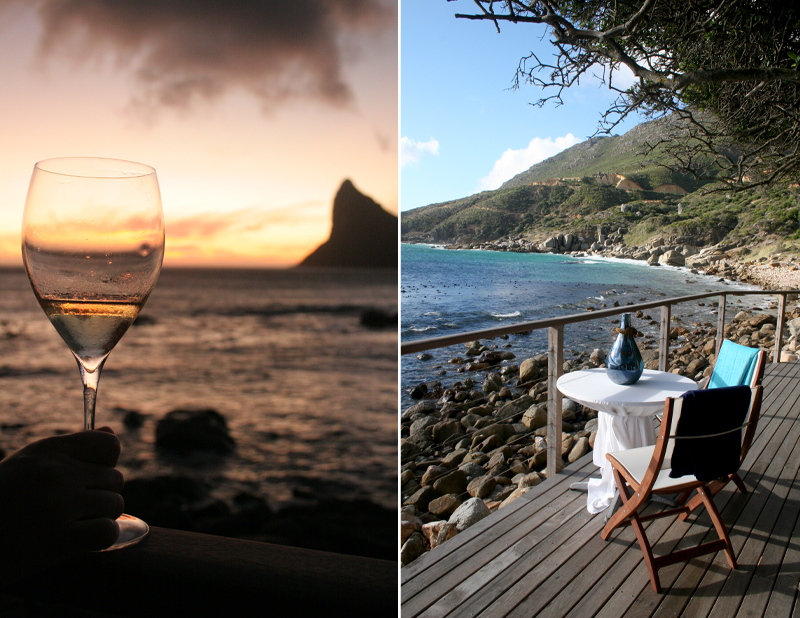 This is the conversation that transpired as I was dashing out of the front door to meet some friends on a recent trip to Cape Town:

NICK:  “Remember – you have to be back at four thirty!”

JEANNE:  “But I thought we were only going to meet G for sundowners, and you know the sun doesn’t set till seven?”

NICK: “Yes but we have to meet her in some parking lot at Hout Bay to travel to this place together.”

JEANNE: “A parking lot in Hout Bay??  But you told me I had to wear something smart?”

NICK:  “Apparently you do – it’s some place on the breakwater in Hout Bay. She’s being very secretive…”

Now those of you who know Hout Bay will probably, like me, imagine the breakwater of the harbour, usually full of fishermen and redolent with the smell of fish – definitely not a “formalwear required” type of place.  I was baffled.  But family is family and at four thirty I was dressed reasonably smartly and ready to go.  But to my surprise, we did not head down to the harbour in Hout Bay.  Instead, we headed for historic Chapman’s Peak Drive.  Once through the toll gate, we had barely gone a couple of hundred yards when we had to turn into an imposing gate on the seaward side of the road, emblazoned with the word “Tintswalo“.  It may look like just another wrought iron gate, but let me assure you, stepping through it felt like stepping through Alice’s proverbial looking glass into another world.

Once through the gate, you find yourself in a small parking lot with a paved single-track road leading off down the mountainside towards the sea.  “So… we drink in the parking lot?” I asked, still puzzled.  “Of course not!” said G.  “They come and fetch you.”  Once again I was puzzled – why on earth could we not drive our perfectly functional car down this apparently functional road to wherever we needed to go?  But once we were firmly ensconced in charming manager Ryno’s 4×4, I realised why:  the road is more like a black diamond ski slope in places than a road, but with the addition of treacherous hairpin bends.  Must be fun in Cape Town’s rainy season!

As you descend the few hundred metres to the ocean, you drive through pristine Cape vegetation with no sign of human habitation other than the road itself.  This is because Tintswalo is situated on a concession in the middle of a protected nature reserve where the unique indigenous fynbos (one of the biomes making up the World Heritage Cape Floral Kingdom) flourishes – over 9,000 distinct species of plants occur in the area, 6,200 of which occur nowhere else in the world.  And finally you arrive at the lodge itself, metres from where the Atlantic Ocean laps the shoreline and beautifully decorated in the tranquil browns and aquamarines that echo the rocks and water outside. On the day that we visited, the lodge was not particularly full, so we had the lounge ad deck largely to ourselves – I felt as if my Lotto numbers had finally come up!  Our booking was for champagne and canapés and upon arrival we were welcomed by the lovely Melissa (the manageress and Ryno’s wife) and handed glasses of Pierre Jourdan sparkling wine before stepping out onto the deck.  The pictures hardly do justice to this space, nestled under 300+ year old white milkwood trees.  Behind you are the slopes of Chapman’s Peak; before you, aquamarine water and the imposing silhouette of the Sentinel mountain. And all around you is wood (the entire development has been designed to be as low-impact as possible and is built on stilts, from wood, so that it can be removed if necessary without scarring the landscape) and the sound of the sea.  It is as close to heaven as I’ve been in a while.

After we had worked our way through the first bottle of sparkling wine, the canapés were brought out – and very substantial canapés they were.  Nothing was mass-produced or reheated – everything spoke of fresh ingredients, freshly prepared.  We had crostini with camembert, caramelised red onions and cherry tomatoes; maki rolls; spicy chicken meatballs (were they Vietnamese?); divine grilled coconut Thai prawns; and chicken satay skewers.  Not pictured were the soy and plum sauces, the pickled ginger and adorable little wasabi paste balls. A veritable feast, for the eyes and the palate. Tintswalo Atlantic is primarily a boutique hotel rather than a dining destination and there are 12 guest suites strung out along the coastline – not that you’d know from the main deck as they are completely secluded and hidden from view.  Each suite comprises a large bedroom with a sitting area, a small private deck, a huge bathroom with his & hers showers and basins, and uninterrupted ocean views.  The suites are all island-themed and decorated accordingly (from Zanzibar to Antigua to Sicily to Robben Island) – but don’t worry, it is more of a nod to the theme than theme park garishness!  The emphasis is on relaxed style and comfort throughout and I was lucky to see some of the suites first-hand after getting chatting to co-owner Ernest Corbett.  I asked if I could move in permanently as writer-in-residence but sadly Ernest didn’t seem to think this would be possible 😉  Because Tintswalo is primarily in the accommodation business, meals can only be booked by non-residents when the hotel is empty or the guests are dining out.  I have heard that the breakfasts are legendary, but we were unable to secure a booking on our last visit as they were fully booked.  I can imagine nothing nicer than a summer dinner here, but your best bet to get in as a non-resident is probably to have drinks and canapés as we did.

As the sun set and the weather cooled, we headed into the lounge where the staff had lit a log fire to fend off the first of the Autumn chill coming off the Atlantic.  The mood was sociable as all the hotel guests were back and having pre-dinner drinks.  It felt like the best house party you could ever hope to be invited to.  My final memory of the day was a call from Ernest for everybody to come out onto the deck to see the sun setting over the water, and to throw a pebble into the waves while making a wish.  I know you aren’t supposed to tell what your wish was, but mine was to stay at Tintswalo Atlantic forever.  I’ll let you know when it comes true 🙂