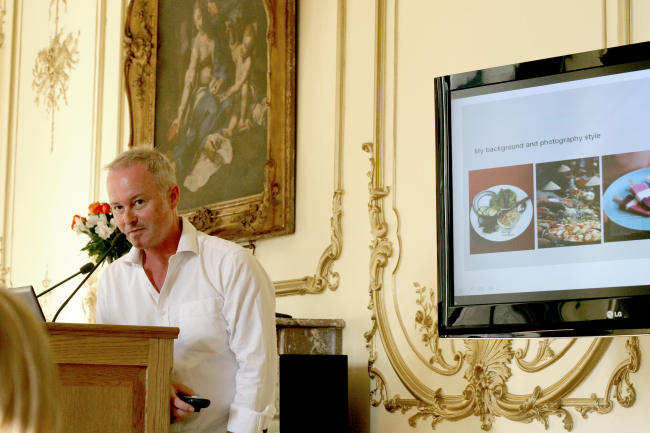 When I started a food blog, I had modest aspirations.  I hoped to meet a few like-minded people and pictured myself perhaps being asked to write a few words for magazines.  What I didn’t picture was myself sitting on the grand staircase of an embassy, changing my trainers for strappy sandals in front of two lovely PR ladies that I only met seconds before; or discussing South African restaurants in London with the ambassador.  But that was in fact exactly how my evening kicked off last Wednesday night.

The occasion was a rather novel function hosted by the Bord Bia (or Irish Food Board) to promote Irish products and to provide food bloggers with some useful food styling and photography tips.  To this end, they had provided lavish amounts of Irish food for us to try and to photograph; delicious Irish-themed canapés (the black pudding crostini stand out in my mind); and the company of talented food writer, stylist and photographer Alastair Hendy for the evening.  After my chat to the Irish ambassador, I had a chance to mingle with some of my other favourite London food bloggers like Niamh of Eat Like a Girl, Sarah of Maison Cupcake, Ailbhe of Simply Splendiferous, Bron of Feast with Bron, Pascale of Extra Relish, Michele of 5a.m. Foodie, Anne of Anne’s Kitchen, Rejina of Gastrogeek, Kavey of Kavey Eats and Joanna of Joanna’s Food, Matina of Feta & Arepa and Luiz of The London Foodie before Alastair’s talk got underway. I am not going to give you a blow-by-blow account of the excellent tips that Alistair gave – for that, you can’t do much better than Sarah’s excellent post containing 21 top tips from the night.  Instead I will tell you about the random things that I personally found to be the most useful from the talk.  In general, I did not need information on aperture/shutter speed/ISO or white balance, but mostly enjoyed Alistair’s styling tips and listening to how he goes about creating a mood or a series of cohesive pics.  As a general observation, it also struck me how different the worlds of the professional food photographer and the food blogger are.  Unlike Alistair’s shoots, everything that you see on this blog is made primarily to eat – usually less than 30 seconds after the photo is taken, by my ravenous husband.  So although tips like using dulling spray on cutlery may be useful in a professional shoot, I don’t think hubby likes the taste of dulling spray anywhere near his food! I also had to have a giggle at Alistair’s advice not to rent props but to buy whenever you see something you like.  Hubby is NOT going to thank Alistair for that 😉

Here are my five top tips from the night:

It was also refreshing to hear Alastair say that Photoshop is an essential final step to crafting a photo.  While I agree that you need to get the best image possible captured on camera, there are very few images that can’t be improved with a slight upping of brightness and contrast, and some colour correction.  People seem to equate the use of Photoshop with somehow faking a photograph (hello BP!!), but Photoshop is the digital equivalent of what a darkroom is for film photographers – a place to tweak.  Realise its limitations (no amount of Photoshopping can fix an out of focus picture!) and use it to your best advantage.

And finally, here is a selection of my photos from the night – the full set is available as a Flickr album (and here’s one of me and my camera from the Bord Bia website!).  For the curious among you, all these shots were taken with my trusty Canon EOS 20D and a Canon 50mm f1.8 lens, which accounts for the very shallow depth of field.  Which is your favourite shot? Thanks once again to Alastair for giving up his time to come and speak to us; to the Irish embassy and Bord Bia for organising; and to FoodMatters for inviting me!