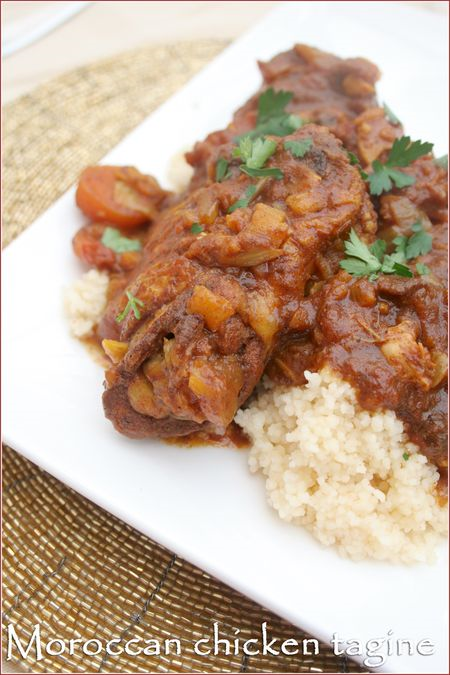 I am a firm believer that there are a number of ways in which the world can definitively be divided into two types of people:

Seeing as I am of the opinion that Nando’s lemon and herb chicken is a little on the spicy side, obviously I had to go and marry a man who once downed a double tot glass of half Tabasco and half tequila for a laugh. The line between stupid and hard-core narrows daily!

Years of marriage have kind of conditioned me to believe that everyone except me loves hot food, so when I cook I tend to assume that if I can take the heat then it should be fine for everyone else too.  But as Samuel L Jackson said, assume makes an ass out of you and me.  So when I made a spicy chicken tagine as the second course of a recent Valentine’s Day lunch (to follow the halloumi with zaa’tar and red pepper coulis), I tasted it and dubbed it hot but not unbearable… but some of my guests thought I was trying to incinerate them. Live and learn!

This recipe is adapted from one by Jean-Christophe Novelli.  I replaced the poussin with chicken pieces, fiddled with some of the spice quantities and added some touches of my own, like preserved lemons.  The dried apricots I used were diced, but next time I would use whole or halved dried apricots – otherwise their sweetness gets lost.  NB – there is a LOT of spice in this recipe!! if you like things not-so-spicy, I would reduce the cayenne pepper by half but if you like spice, this dish is perfectly balanced between sweetness and heat.  In the interests of full disclosure, I made mine not in a traditional tagine but in my trusty 5 litre Corningware casserole dish.  I served it on fluffy couscous and accompanied by a simple salad of flat-leaf parsley, cherry tomatoes and diced cucumber.  And a cool bowl of yoghurt on the side for spice-phobes!