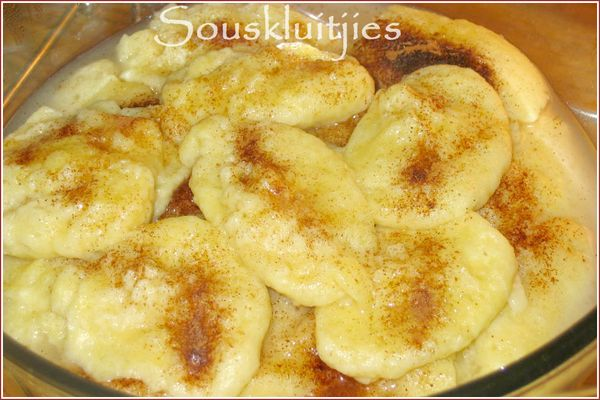 [As I am currently on holiday, this is an edited re-posting of one of the first traditional South African desserts that I ever posted on this blog, over five years ago in 2004.  The photo is also from 2004, before anybody told me not to use a flash in food photography…  You’ve come a long way, baby!]

My mom used to make many dishes that I loved as a child.  But she also made a few that I loathed or, at the very least, did not see the point of.  In the “loathed” camp was bobotie (a curried mince dish, topped with egg custard and oven-baked – which I now adore!) and curried eggs (hardboiled eggs, shelled and cut in half and laid in the bottom of a dish before being covered with a curried white sauce).  In the “can’t see the point” camp were fruit salad, most soups (except, bizarrely, celery soup) and a dessert called souskluitjies (say sews-clay-keys).

Souskluitjies is an Afrikaans word that literally means sauce dumplings and I remembered it as a warm dessert, roughly the consistence of thick custard with lots of cinnamonny sauce, and how often my father used to ask my mom to make it.  When my mother made it, I never understood what on earth all the fuss was about – I mean, why eat dumplings when you could have chocolate mousse?   It just didn’t make sense…

Kluitjies or dumplings are thought to have originated in Persia and spread throughout Europe – and the rest of the world.  In fact, I challenge you to find a cuisine in which some form of dumpling is unheard of.  When the Dutch settlers arrived at the Cape in 1652 to establish a refreshment station for the Dutch East India Company, they brought with them their cooking tradition, and by this time dumplings were already popular in Holland.  It is thought that souskluitjies developed from the German dish of Dampfnudel which involved cooking spoonfuls of yeast batter in a shallow saucepan of milk (which was eventually replaced by water because milk was scarce at the Cape) with a tight-fitting lid.  These dumplings could be served with gravy and meat, or with jam as a dessert.  In the dish that came to be known as souskluitjies, the water in which the dumplings had been cooked was mixed with sugar, butter and spices and poured over the cooked dumplings – hence the “sauce dumplings”.  In fact, this method of serving dumplings with a sweet sauce was known in many Afrikaans households as Duitse kluitjies (German dumplings) because of their similarity to Dampfnudel.

Souskluitjies was a popular dish in South Africa up to the first half of the 20th century and was particularly popular during the depression as the ingredients were relatively basic and the recipe could be altered according to the cook’s financial constraints (e.g. adding eggs or not; cooking the dumplings in milk or water).  In fact a 1937 South African cookbook devoted an entire chapter to dumplings, which starts to explain my father’s yearning for souskluitjies.  He was born in 1922 and lived through the Depression – so to him, souskluitjies must be a poignant reminder of childhood.

But enough of the past – on to my bold experiment in dumpling-making!  If I were at home I would probably have consulted my mom’s vintage copy of Kook en Geniet – the bible of beginners’ cooking in South Africa.  But just to make life interesting, I am on a different continent, so I had a quick look around the Web to see what I could find.  I found quite a few recipes for souskluitjies but most merely topped the dumplings with a knob of butter and some cinnamon sugar, or added custard, whereas I wanted the real thing, with syrupy sauce, just like Mamma used to make.  I eventually came across a suitable recipe for both the dumplings and the syrup at http://www.roekeloos.co.za/kos/index.html (a fab site for South African recipes, but unfortunately only available in Afrikaans) and got to work.

So how did they turn out?  Well, they looked like I remembered them.  And when I snuck a taste of a dumpling that broke, they tasted pretty much as they should.  But the defining moment came when I tasted the syrup.  Suddenly it was Christmas and I was about 12, helping my mom put coins into the Christmas pudding in the kitchen before we carried it through to the table.  She was stirring the brandy sauce while I was concealing the entry points of the coins and she gave me a spoon dipped in the sauce to lick.  This was that sauce (give or take a shot of brandy!).  The sauce that I had associated with memories of Christmas was in fact a variation of this spicy sugar syrup for dumplings, handed down from our 17th century forebears.  And somehow I had never made the connection as a child.  But now years later and in a foreign land, tasting this created a tangible connection between the present and a past that I cannot recapture. But the comforting thing is that I can recreate the memory any time.  And that’s how I would sum up the taste of the souskluitjies – 100% comfort food.

In a large saucepan with a tight-fitting lid, boil 1,25 litres of water (water must be at least 3cm deep) together with a pinch of salt.

Using a teaspoon dipped in boiling water, place spoonfuls of the batter carefully into the boiling water (as many as can comfortable fit in the saucepan you are using).

Cover the saucepan with a tight-fitting lid and cook on medium heat for 8-10 minutes.  NB – resist the urge to peek at the dumplings during cooking as this causes them to implode like failed soufflé and become tough!

Remove from heat and spoon into a serving bowl using a slotted spoon.  Keep warm.  Repeat the process if necessary until the batter is used up.  On top of each layer of dumplings, sprinkle some cinnamon sugar.

When the dumplings are all done, return the water to medium heat.  As some of it will have boiled away, you may need to add some to top it up to almost its original level. Add the rest of the sauce ingredients (add sherry last) except the custard powder and stir until all the sugar has melted.  Mix about 4 tablespoons of custard powder with cold water to make a smooth paste and add this slowly to the syrup to thicken it. Pour the syrup over the dumplings and serve.

Some comments on the method:  Do not be tempted to do what I did and use a tablespoon for spooning the batter into the boiling water – this meant my first dumplings were just HUGE and broke when I lifted them out of the water.  But when I actually started following the recipe (!) and used a teaspoon, I got lovely little oval dumplings.  The hardest part for me was not peeking under the lid while the dumplings were in the water…  I’m not a patient person and I was panicking that things were going horribly wrong under that lid!  These fears proved to be unfounded 🙂

**H2Ope for Haiti update** Please remember that the deadline for entering the H2Ope for Haiti charity raffle is midnight GMT on Sunday 7 March. The event is raising money for Concern Worldwide, a well-established charity that was already operating in Haiti at the time of the January 12th quake, meaning they could mobilize faster than most to receive and distribute aid to those in the greatest need, including hundreds of thousands of litres of clean drinking water. There are still a few prizes with no or very few tickets sold – so for £6.50 (about $10), you could have a 100% chance of winning an original photographic print (Berry Flag), a free photo restoration, a customised tote bag, a child’s Winter Olympics backpack and fleece blanket, a piece of Care Ware jewellery, or a $50 CSN Stores voucher.  Plus there are many more prizes where you have a 50% chance of winning – and who can say no to those odds??  I hope that everyone reading this can see their way clear to buying just one ticket – pretty please??