You are here: Home / Recipes / Soup / Joumou soup – a recipe from Haiti 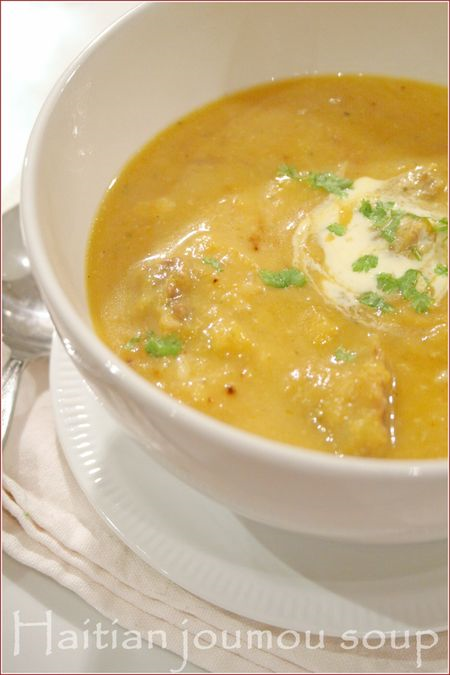 **H2Ope for Haiti update** I hope that you have all heard by now that the deadline for entering the H2Ope for Haiti charity raffle has been extended until midnight GMT on Sunday 7 March. The event is raising money for Concern Worldwide, a well-established charity that was already operating in Haiti at the time of the January 12th quake, meaning they could mobilize faster than most to receive and distribute aid to those in the greatest need, including hundreds of thousands of litres of clean drinking water.

In one week we have raised just over £800 which is fantastic, given the economic climate – but there are still a few prizes with no or very few tickets sold – so for £6.50 (about $10), you could have a 100% chance of winning one of two original photographic prints (Desert Bloom or Berry Flag), a free photo restoration, a customised tote bag, a child’s Winter Olympics backpack and fleece blanket, a piece of Care Ware jewellery, or a $50 CSN Stores voucher.  Plus there are many more prizes where you have a 50% chance of winning – and who can say no to those odds??  I hope that everyone reading this can see their way clear to buying just one ticket – pretty please??

And now on to today’s very appropriate recipe.  For the very first time, I am joining my friend Joan of Foodalogue’s 2010 Culinary Tour – South of the Border!  This is a weekly event where Joan leads us in a virtual culinary tour with a weekly country theme.  Last year, Joan and her friends toured the world; this year they are touring Central and South America.  And this week they are visiting Haiti.  How could I refuse to get on the tour bus?  The rules require participants to make and post a dish from the country that we are touring this week, and Joan will post a roundup on Foodalogue on 3 March.

Soup is one of those constants that you find in practically every cuisine.  It can be made light and refreshing for warm climates, or rib-sticking and nourishing for cold climates.  It can be made with expensive ingredients; it can be made with water and almosty any cheap ingredient you have to hand.  It can be served to royalty at banquets, or enjoyed on the mud floor of a rural hut.  It is some of the most egalitarian food that you will find, and my Sunday night standard dinner for as long as I can remember.

So when I decided to join the Culinary Tour and started researching Haitian dishes,  it wasn’t surprising that the dish that caught my eye was a soup.  Joumou soup (pronounced “joo moo”) is a popular dish in Haiti.  The story goes that it is particuarly associated with 1 January 1804, the day on which (after a 13-year struggle against their French colonial masters) , the people of Haiti at last achieved independence.  What better way to celebrate than with the very soup they had been forbidden as slaves to eat?  Traditionally the soup is made of joumou, an aromatic type of pumpkin, simmered together with other vegetables, spices and meat.   It is said that during the independence celebrations, a huge kettle of pumpkin soup was made in the city of Gonaïves, and everyone present was served a bowl. To this day the soup is enjoyed at New year by Haitians around the world.  And at this time when the people of Haiti are suffering so greatly at the hands of violent natural forces, a meal of joumou soup is a small gesture of solidarity with their plight. The recipe is cobbled together from various examples I found on the Net, with some tweaks of my own (the allspice with the meat, for one, because I think allspice improves most red meat!).  The soup itself is more of a one-pot meal than a soup, with vegetables, rice and meat all in one delicious dish.  The sweetness of the root vegetables is offset beautifully by the heat of the cayenne pepper and makes for a very warming, balanced dish.  If you can find scotch bonnet peppers and like heat, by all means substitute those for the cayenne pepper.

Place the beef in a saucepan, cover generously with water and stir in the allspice and pepper.  Boil over medium low heat, partially covered for at least 1 hour or until tender.  Drain and chop beef into bite-sized pieces.

In a large stock pot, bring the chicken stock to a boil.  Add the pumpkin, turnips/swede, beef, onions, parsley, thyme, and 2 cloves garlic.   Simmer until the pumpkin is tender (about15 minutes).

Discard parsley and thyme and remove the meat with a slotted spoon – keep warm.  Using an immersion blender, puree the vegetables.

Return to saucepan to the heat, then add the meat, milk, nutmeg, butter, and rice.  Cook until rice is tender (15-20 minutes, or longer if you are using bown rice).

Season with salt and pepper, and mix in remaining garlic. Add a little more water or milk if the consistency is too thick.  Serve in warmed bowls with a swirl of cream in the centre of each bowl, and crusty bread on the side.