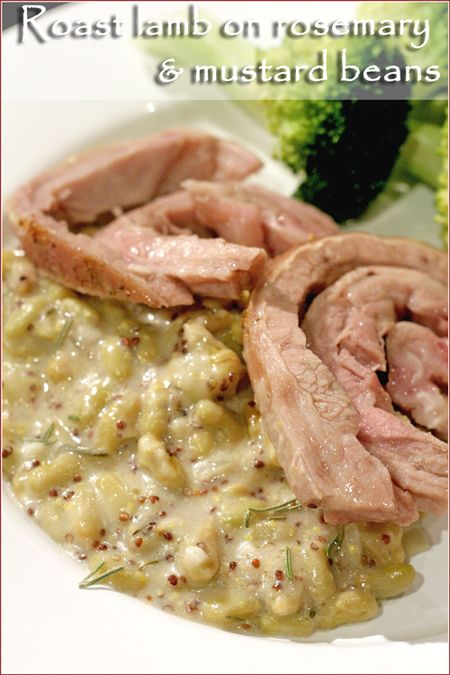 “Breast of lamb is a strange joint which is pretty nearly inedible unless you have this recipe.”  (Old Scrote’s Real Food Cookbook).  I think he is being a little harsh, but since  didn’t have the benefit of his wisdom before I embarked on my cooking adventure, I didn’t feel any rising panic about how to cook the meat!  Probably for the best.  You don’t want your roast smelling your fear and seizing up 😉

I’m sure I’ve mentioned before that my husband loves a bargain, so when he came across the small rolled breast of lamb in the supermarket, it made its way into our trolley at light-speed.  It cost something truly ridiculous like £2.50 and looked big enough to feed us both – now how can you argue with that?  Subsequent research has revealed that it is an oblong-shaped part of the forequarter containing ribs and alternating layers of fat and meat, usually with fat covering one of the sides.  The one we bought was deboned and rolled up with the fatty side outside.  In retrospect, perhaps I should have unrolled it and tried stuffing it, but it was a weeknight and we were hungry, so in the end that seemed like too much of a faff.  Instead I seasoned & roasted it on a bed of flageolet beans in a fragrant rosemary and wholegrain mustard sauce

If I were to make this again with lamb breast, I would roast it for longer (I have amended my recipe instructions to allow for longer cooking).  In fact had I known that “lamb brisket” is another name that this cut goes under, I would probably have shied away from roasting it altogether and assumed that it needs braising. This is a roundabout way of saying that the meat will not be tender if you treat it like an ordinary lamb roast!  The meat certainly was flavourful but beware – there was also a heart of gristle… so there are some obvious reasons why it is a cheap cut.  What did work very well was the beans.  I had chosen to cook the roast on top of the saucy beans because I did not want the meat to dry out, and this was a good call.  As for the flavour – wonderful!  Rosemary is a classic lamb pairing and the creamy beans definitely benefited from the zing of the mustard.

So all in all, this was a far cry from “pretty nearly inedible” and let’s face it, what’s not to like about a piece of lamb that provides 2 meals (watch this space) for 2 people for under £3? In saucepan, heat 1 Tbsp of olive oil over medium heat.  Add the onions and sautée until translucent but not browned.  Stir in the mustard and cream, heat and then add the drained beans.  Heat through, adding a little milk if the mixture is too thick.  Add the rosemary, check for seasoning and add salt and pepper to taste.  Pour mixture into an ovenproof dish and keep warm.

Rub the meat all over with salt and pepper.  Place on top of the beans and cover with foil.  Roast in the pre-heated oven for 2 hours, removing the tinfoil for the last 30 minutes to brown the fat.

Serve in slices on top of the beans, accompanied by green vegetables.