You are here: Home / In my pantry / Product review – Good Natured strawberries 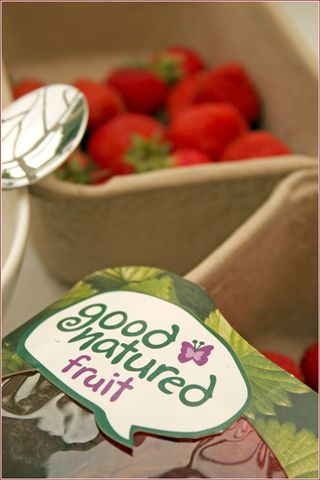 Nothing like a trawl through your draft posts to remind you of all the good intentions of summer posts unwritten…!

Back at the start of summer, around about the time of Wimbledon, in fact, I received an e-mail asking whether I would like a delivery of free strawberries and cream.  Talk about a no-brainer – who wouldn’t?  So I fired off an e-mail saying yes sure, here is my address and forgot about it – more than once, such offers have come to no fruition.  A couple of days later I was at my desk at work when a chap from the post room came round with a large brown paper bag with my name on it.  “Are you sure that’s for me?”, I asked, momentarily confused until I saw the Good Natured sticker on the bag.  There may be no such thing as a free lunch, but my free dessert had evidently arrived!

Good Natured is a company that grew out of Angus Soft Fruits, a family-run Scottish company.  They recognised the public’s concerns over pesticides in fruit and developed a method of biological pest control, using predatory insects such as ladybirds to combat pests rather than wholesale spraying of fields.  After small scale trials in 2006, the process was commercialised and made available to a network of Good Natured growers in Scotland, England and Europe, with the stated aim of providing pesticide-free fruit to customers at affordable prices.  The range of products has been extended to include strawberries, raspberries, tomatoes, cucumbers and peppers, and they are available in major supermarkets.  Interestingly, around my neighbourhood I have mainly seen them in ASDA, so don’t think you’ll only find their products in chi-chi markets!

As I said, my special delivery included two punnets of strawberries with perfect British summer accoutrements:  double cream and half a bottle of Pimms.  Pimms and cream aside, I immediately liked the packaging.  There’s minimal plasti, a printed cardboard sleeve and the punnet itself made from the same cardboard as egg boxes.  This means that almost the entire package is easily recyclable – a huge leap forward from the plastic punnets that most berries are sold in.  The strawberries themselves were on the small to medum size but perfectly strawberry-shaped and an even, ripe red.  The proof of the pudding, though, was in the taste – and here they scored full marks.  Unlike the flavourless giant strawerries that are so often sold in this country and prove disappointing on the palate, these tasted like the strawberries I remember as a child, with a lovely sweet, intense flavour.

I have bought a number of punnets since then and have also bought their beautiful vine tomatoes which are equally flavourful.  Their products are not budget products, but are cheaper than organic and packed with flavour – definitely worth a try.

So what did I make with my strawberry bounty?  Eton Mess, of course!  The recipe is pretty much the same as the one I posted prevously, with the addition of a strawberry coulis that I made with a splash of rather divine balsamic vinegar.  Oh, and the addition of a rather nice product from ASDA (I know, not words you thought you’d see on this blog, but there is a recession on, you know…) – their Extra Special strawberry mini meringues with freeze-dried strawberry bits, crushed up in the mess.