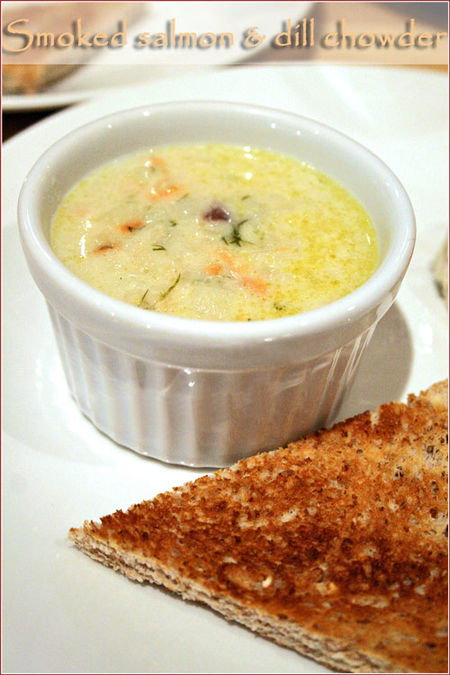 No, don’t worry, CookSister has not suddenly turned into an adult site!  I’m talking about one ingredient, prepared three ways, and served together.  You might think that this is the preserve of poncey restaurants and celebrity TV chefs, but over the festive season I proved it’s not.  You see, although I had been invited out for Christmas day, Boxing day and New Year’s Eve, I had promised to make something for each of these occasions.  Yes, I could have made the same thing three times, but that would have bored me to death!  At the same time, it was meant to be my holiday and I didn’t want to spend my time shopping for exotic ingredients and slaving away in the kitchen… So I figured I’d take one central ingredient, prepare it three ways, and then mix and match.  Voila!

To me, the three ingredients that are essential to make it feel like Christmas are Champagne, roast gammon and smoked salmon.  I’d already made gammon before Christmas and you can’t very well make a starter out of Champagne alone… so I decided to try smoked salmon three ways:  as a chowder, a quiche and a pate.  First up is the smoked salmon chowder which I made on Christmas day and again on new Year’s Eve.

The word chowder has its etymological roots in the Latin word caldaria, meaning a place to warm things and later a cooking pot.  This was also the root of the English word “cauldron” and the French word chaudiere – and it is obviously a short hop from there to chowder.  The early US settlers made chowder with what they brought on their ships, so their chowders often featured salt pork and ship’s biscuits.  Chowders (or something similar) seem to have developed spontaneously in fishing communities around the world, probably as families stood around the cooking cauldron and waited for their ships to return from the sea.  A portion of each man’s catch would be dumped in the chaudiere or cauldron to form part of the chowder for the collective celebrations later.

SMOKED SALMON & DILL CHOWDER (serves 4 or 6 as a starter)

Fry the shallots gently in the butter, then add the potatoes, stock and milk and simmer until the potatoes are very tender.

You could just serve this in soup bowls with crusty bread, or you could do what I did and serve it in a ramekin or espresso cup, accompanied by either a mini salmon quiche or some salmon pate.

« Waiter, there’s something in my… sweet/savoury swap!
Saturday Snapshots #21 »