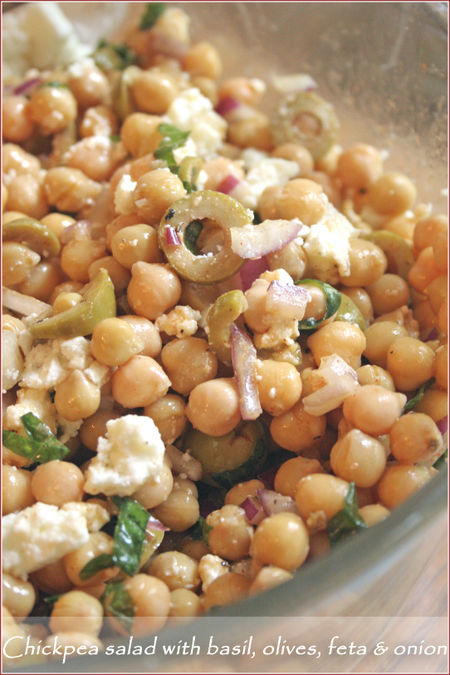 Salads are your friend.  They really are – and I’m glad I discovered this at a relatively early age.

If it were up to my father, I don’t think salads would ever have graced our table.  He has a long-standing and deep-rooted suspicion for all things green and crunchy and I remember my mom serving him ratatouille by spooning some onto his plate and then carefully carefully picking out the greenery, leaving only the tomato and mushroom/aubergine bits!  The reason he always gave for not having salad was that eating lettuce was Very Dangerous.  I think this stemmed from a visit in the 1970s to India, when he was advised not to eat things that had been washed in potentially dirty water, but he enthusiastically carried this piece of advice home to South Africa with him and made it his motto.  So salads were generally off the menu when I was a child.

I think that what changed the entire family’s view on salads was Cranzgot’s in Plettenberg Bay.  In the early 1980s we routinely rented holiday houses in Plett for school holidays, and at some point in the holiday we’d invariably get a takeaway pizza from Cranzgot’s (the unusual name, by the way, comes from a JP Donleavy novel).  My mom had never quite given up on getting us to eat salads, and persisted in annoying my father, living on the edge and daring to eat lettuce, so one day she pushed the boat out and ordered a salad to accompany the pizza.  But not just any salad – a Cranzgot’s cheese salad.

Now I can spin you all sorts of stories about why this salad converted us – the exotic greenery, the aged vinegar in the dressing, or the imported Italian plum tomatoes… but I’d be lying.  The salad was absolutely standard – iceberg lettuce, tomatoes, cucumber and some sweet onions – and the dressing as I recall was sunflower oil and plain old spirit vinegar with some dried Italian herbs.  No, what made this salad was the cheese.  A veritable crust of grated cheddar and mozzarella covered the entire bowl, and even when you tossed the salad the ration of cheese to greenery was pretty good.  So my cunning mother made sure the salad was properly tossed, forcing us to take some leaves to get at the cheesy bits, and in the process we realised that the whole lot together tasted pretty damn good.  Even my dad was willing to nibble on a tomato, provided there was some cheese on it 😉

And that is the story of how I became addicted to salads.  Sadly, Cranzgot’s have changed their recipe and moved with the times to incorporate all sorts of fancy ingredients.  Which is a pity, because you should never mess with perfection.

Now in South Africa, I was happy to east crisp, lettuce-based salads all year round, but here in London it’s very hard to work up enthusiasm for a cool, crunchy salad when there’s frost on the ground.  So I’ve had to expand my salad horizons and find some more substantial (and potentially warm!) salad options, like this one.  It was inspired by a salad I sometimes buy from Krüger for lunch and I dolled it up a little.  You can either soak and boil dried chickpeas for a better flavour, or you can use well-drained tinned chickpeas.  Go heavy on the basil as it’s the key ingredient.

There’s not much I can say about basil that hasn’t been said before – not for nothing did it win the Herb of the Year poll over at Kalyn’s Kitchen!  So instead, I’ll leave you with some basil trivia collected from around the Web: Love chickpeas? Then you will also love my…

CHICKPEA SALAD WITH BASIL, OLIVES, RED ONION & FETA (serves 4-6 as a side salad)

Add the olive oil and a glug of lemon juice, toss well and check for seasoning.  Add a good grind of black pepper and salt to taste.

If you want this as a warm salad, prepare everything else and then heat the chickpeas, either in the microwave or on the stovetop in their canning liquid.  Drain, mix as above and serve warm.

As you might have guessed, I am submitting this post to Scott of Real Epicurean who is hosting this week’s edition of Weekend Herb Blogging, brainchild of my friend Kalyn and now administered by the lovely Haalo.