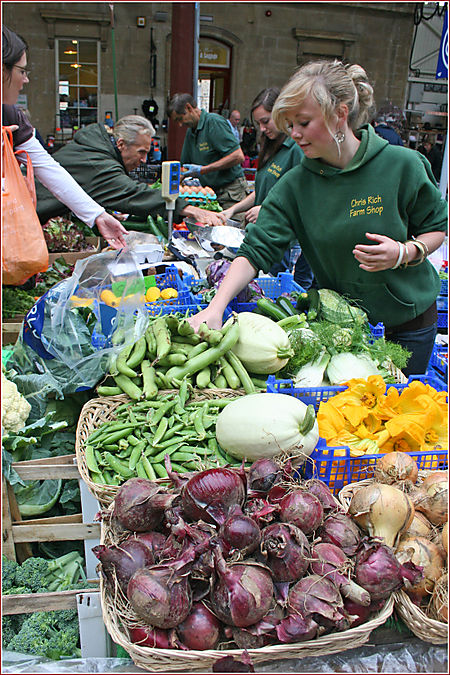 I had woken up to a surprisingly sunny Saturday and was actually quite keen to wear a summer skirt – jeans all through summer is a bit depressing.  But in the end, reason prevailed and I put on  jeans (but with sparkly sandals) before heading off to Bath to spend a day with the lovely Inge.  I don’t even think the train was halfway there before the sky clouded over and Inge sent me a text asking “hope you brought an umbrella!”.

And that is how I found myself an hor or so later walking around Bath farmers’ market in borrowed rain gear and wellies!

Bath farmers’ market was started in 1997 and was the first market of its kind in modern Britain: a producer-managed marketplace for local producers to sell their own produce directly to local people.  In addition to encouraging eatling locally, the market also encouraged sustainable farming practices and supported small producers who might easily have been ignored by large retailers.  Today, the market still provides a place where food can be bought from the people who produced it, at a reasonable price, and almost everything on offer at the market is produced within a 40 mile radius of Bath. The olives and chillies, I suspect, are an example of things not grown within 40 miles of Bath, but looked gorgeous nonetheless.  Sleight Farm, on the other hand, is most definitely within 40 miles from Bath.  It was here that Mary Holbrook started making cheese in the mid-1970s, armed with nothing more than two goats and next to no knowledge about cheesemaking. Today, she has 90 goats and her cheeses can be bought at Harrods and Neal’s Yard Dairy, or by mail order through the Fine Cheese Company in Bath.  Try her goats cheese pyramid rolled in ash – gorgeous. I’m afraid I didn’t take down the name of the stall selling these absolutely gorgeous jars of marmalade and preserves as I was too busy capturing the glorious colours with my camera.  Mea culpa.  The end result is so pretty that I’m sending it as my entry into this month’s citrus-themed Click event over at Jugalbandi, which ends on the 30th. And just beyond the jams, we got to my favourite stall of the day, where at first glance, you might think you’ve notice a spelling mistake, but closer inspection reveals that every item is quirkily labelled: collyflour, carratz, brockoly…  Inge bought some fresh samphire from them, but was fixed with a beady eye and asked “And how are you going to prepare it?” before the samphire was relinquished into her care.  Presumably if she hadn’t said “lightly steamed with a little butter” they may not have entrusted the stuff to her at all!  My favourite, though, was the politically aware, brilliantly topical and totally surreal sign in the oranges. One of the most eye-catching stalls was the tomato stall, selling tomatoes from the Isle of Wight.  As gorgeous as the little golden plum tomatoes or the vine-ripened tomatoes were, in the end I could not resist the mini Santa plum tomatoes – I could eat them like sweets!

We also had a slice of rather delicious apple cake from a lovely gentleman who was also selling whole heart-shaped apple cakes, packed with chunks of beautifully caramelised apple.  If we weren’t off to lunch at Babington House later, I would have been sorely tempted to buy and munch my way through one of those. (More on our lunch in a later post!)

The market takes place every Saturday from 09h00-14h00 at Green park Station, Bath and if you’re in the area, I can highly recommend a visit.  Just be sure to take your large shopping basket! (If you are interested, there are a couple more pics available on my Flickr album.)  As for my mini plum tomatoes, they were absolutely perfect in a rustic caprese salad with torn basil leaves and torn fresh mozzarella.  Which, in turn, was a wonderful foil for the fabulous lomo Iberico de belotta that we had stashed in the fridge.