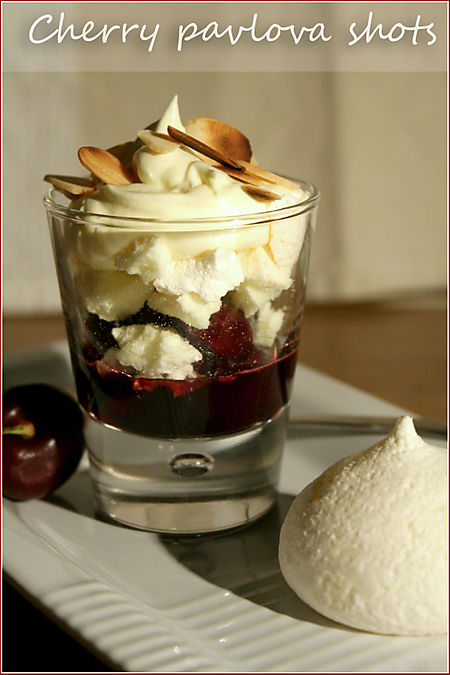 You’d think after my chastisement by the Internuts, I’d learn my lesson – but apparently I’m a slow learner (or I’m just plain otherwise!).

Yes, folks, I’m once again wading into murky waters into which angels fear to dangle their toes.  I am fully aware that I run the risk of being told that nobody from South African can make a “proper” pavlova because I am appropriating Antipodean culture; or that my take on a pavlova recipe is hopelessly culinarily incorrect and therefore a travesty.  But to make a omelette meringue, ya gotta break a few eggs, right?

Pavlova is these days generally taken to refer to a dessert consisting of a meringue base topped with whipped cream and fruit.  The fruit can be anything that takes your fancy, but if you are baking the meringue yourself, you need to get it crisp on the outside while retaining an appealing gooeyness on the inside (a fine art, apparently).  It is thought to have been named after Anna Pavlova, a Russian ballet dancer, during or after her tour of Australia and new Zealand in 1926.  The controversy that follows this delicious dessert wherever it goes stems from the fact that nobody seems to be sure who did it first – the Australians or the New Zelanders.

But now it seems that we may have an answer.  An culinary anthropologist named Helen Leach from the university of Otago has gone so far as to devote a serious book to the origins of pavlova.  And after much meticulous research, she has concluded that a) it doesn’t matter who invented it; but b) in case you disagree with that view, it seems that pavlova recipes in New Zealand literature predate those in Australian literature [CookSister ducks to dodge flying projectiles hurled by angry Aussie crowd!].

Enough history – on to my dessert.  I can happily lay claim to having dreamed this up all by myself – in fact the only reason that the word pavlova even crops up in the title of this dish is because it features whipped cream, fruit and meringue.  I could also have called it deconstructed Eton mess, but it didn’t have quite the same ring to it 😉  First off, let me confess that I did NOT make my own meringue. Somehow we hardly ever use up all those spare egg yolks, so it seemed less wasteful to buy ready-made meringues.  I discovered that Sainsbury’s sells a tub of rather lovely mini lemon meringues in their bakery.  They’re not chewy inside, but they do have a rather nice lemony tang to offset all the usual meringue sweetness.  The cherries were briefly cooked in an alcoholic syrup with some spices to give the whole dessert a rather grown-up flavour.  The contrast between the alcoholic cherries, sweet meringue and nutty almonds; or the soft cream and the crunchy almonds and meringue make this a perfectly balanced dessert.  Serving small portions in shot glasses makes for a very manageable size portion, and will impress the daylights out of your guests – apart from looking adorable! 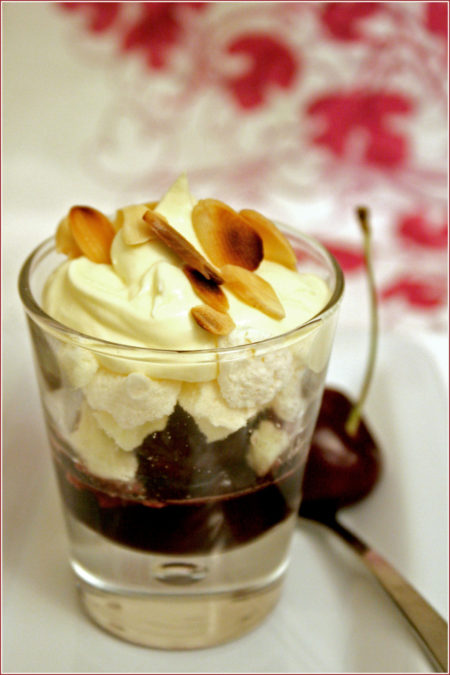 Place the stoned and halved cherries in a small saucepan.  Add equal amounts of water and cherry liqueur until the cherries are almost covered.  Lightly crush the cardamom pod and add it together with the cinnamon stick to the saucepan.  Stir in 1 tsp caster sugar (if desired) until dissolved, then allow to simmer over low heat for 15-20 minutes or until the liquid is reduced by about half. Remove from the heat.

Crush the meringues into small chunks (but don’t pulverise them!) and whip the cream until soft peaks form.  In a dry frying pan, toast the slivered almonds, watching them all the time as they catch easily.

Remove the spices from the cherries.  Into the bottom of each large shot glass (or small wine glass) spoon 1-2 Tbsp of the cherry mixture.  Top with 2 crushed mini-meringues.  Spoon 2 Tbsp of whipped cream over the meringue and top with toasted slivered almonds.  Serve immediately with a fresh cherry and a mini meringue for garnish.

If you’re not in the mood for being chi-chi, serve in an ordinary dessert bowl in the same way as Eton mess. Not as cute but definitely just as delicious!

This post is my entry into this month’s Snackshots, hosted by my friend Michelle at The Greedy Gourmet.  The theme was meringue and I was relieved to see that store-bought meringues also qualify – phew!