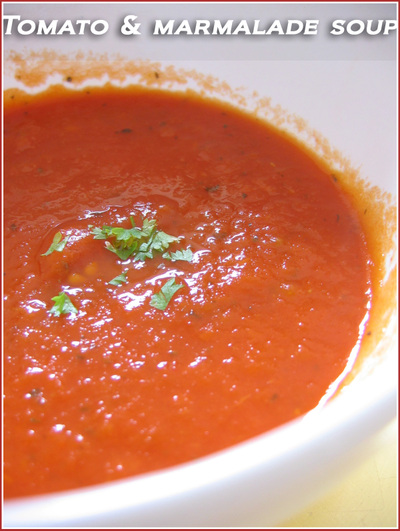 If you read this blog with any regularity, you will have noticed that I seem to go around collecting recipes from all my family and friends – and you’d be spot-on!  Yes, it’s all fine and well to buy beautifully illustrated cookbooks and dream of making truffle foams served in espresso cups or pomegranate granitas, but the reality of my life is that this is probably not going to happen.  I used to beat myself up about this – kind of “how can I be a proper food blogger if I don’t even own a creme brulee torch and could no recognise a sourdough starter if it snuggled up to me on the sofa on evening?”.

But then I made myself a grilled cheese sandwich and decided to stop beating myself up.

For me, food and recipes are all about the backstory.  Whose recipe is this?  How did they come by it?  When did I first have it?  What memories does it hold for me?  Food is about sustaining ourselves, but it’s also about the social aspect of eating, the oral histories passed down within families, and the shared memories that bind friends and lovers together.  So when I invite you to read about another of my adopted recipes, I’m actually asking you to pull up a chair at my family’s table and, for a little while, become one of us.

If you were to give Aunt Dulcie her proper title, she would be Nick’s great-aunt Dulcie, but that’s rather too much of a mouthful!  Dulcie is now in her 80s and lives in my home town of Port Elizabeth.  She went to a Swiss finishing school, has survived two husbands and, despite a hip replacement, is still remarkable well and active.  She sends wonderful long letters and invariably the last paragraph begins with “Gosh – it’s now ten past four in the morning!  Where has the night gone?”.  More than once I have called her upon arriving in PE, only to have her be terribly short with me on the phone.  But then she calls back in an hour or two full of apologies – it was her bridge afternoon and I called in the middle of a rubber!  And although she is resolutely modest about her cooking abilities, she regularly has a huge Christmas party for her neighbours and does all the catering herself.

Whenever I visit, she always has me and my dad round for dinner.  It’s a proper affair with folded napkins, warm rolls and three courses.  And although she always apologises in advance for the plainness of the food, I always come away having requested the recipe for something I tasted that night.  Her Romany Cream and apricot dessert is legendary, to the point that every time she invites us my dad asks hopefully “will she be making THAT pudding?”.  But that’s for another time.  Today’s recipe from Aunt dulcie was something I recently served as a starter at a lunch party.

Tomatoes originated in South America and have at various times in history been regarded as purely ornamental plants, aphrodisiacs – and poisonous!  There is a story, probably apocryphal, of one Colonel Robert Gibbon Johnson (1771-1850) who, as legend has it, introduced the tomato to Salem County, New Jersey. Colonel Johnson’s physician, Dr. James Van Meter, supposedly warned that:

“The foolish colonel will foam and froth at the mouth and double over with appendicitis. All that oxalic acid, in one dose, and you’re dead. If the Wolf Peach [tomato] is too ripe and warmed by the sun, he’ll be exposing himself to brain fever. Should he, by some unlikely chance, survive, I must warn him that the skin…will stick to his stomach and cause cancer.”

But despite this dire warning, Johnson told the cheering spectators that he planned to eat the entire basket and survive. The story goes that thousands of eager spectators turned out to watch Johnson die after eating the poisonous fruits, and were shocked when he lived.

Pull up a chair and grab a bowl. 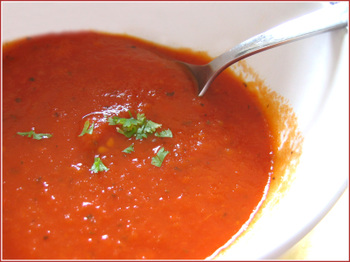 Scald the ripe tomatoes in boiling water, then peel them.  Dice and place in a large soup pot.  Add the tins of chopped tomatoes and heat through until bubbling.

Use an immersion blender to reduce any large chunks, but leave the soup rustic rather than a smooth puree.  Add a splash of Worcestershire sauce and salt and pepper to taste.  If the soup is too thick for your taste, thin with a little water.

Warm the marmalade in the microwave and spoon a tablespoon into the bottom of each bowl.  Ladle the soup on top and then stir lightly.  Garnish with parsley if desired and serve with warm, crusty bread.

I’m submitting this post as my entry to this week’s Weekend Herb Blogging, kindly hosted by Ulrike at Kuechenlatein. Check out her excellent round-up!