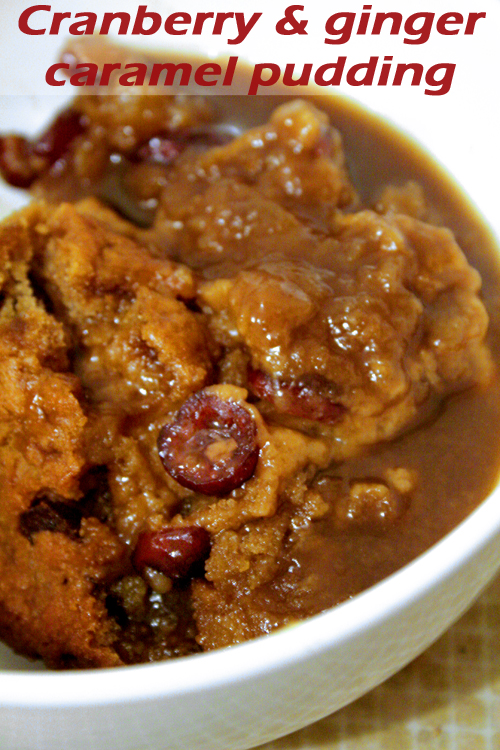 I have a confession to make (no, don’t worry, it won’t be as scandalous as my recent Skeletons in the Pantry post…!).  It’s just that I’ve never really liked Christmas pudding.

I know – it’s kind of freaky, but there you go.

So what to do when you’ve invited some friends over for a pre-Christmas lunch, the roast is in the oven, the weather is simply freezing, and the whole scenario is just crying out for a hot baked pudding with a festive twist?  Christmas pudding would be the path of least resistance, but I decided instead to beat a brand new path through the culinary brambles.

Requirement 1 was that it had to be a baked pudding, preferably self-saucing.  Requirement 2 was that it needed to reference the festive season somehow.  And bonus requirement 3 was that it use up some of the random leftover baking ingredients cluttering up my kitchen counters as we speak.  Which is how the glorious creation pictured above came about.

The recipe is an adaptation of my basic and beloved self-saucing apple caramel pudding, substituting crystallised ginger and dried cranberries for apple, and adding a bit of spice to the batter and sauce with ground ginger.  As we were 7 people and the recipe really only feeds 5 comfortably, I decided to double it.  Without cheking that I had a dish big enough to hold this.  Suffice to say I almost did.  Meaning that the syrupy sauce ended up bubbling over a little and landing on the floor of my oven – cue belching, acrid smoke as I opened the oven door 40 minutes later, and a lingering eau de charcoal in the house.  Also, if you are going to double the recipe, you will need a longer cooking time, as I discovered.  Possibly not double the cooking time, but definitely 1.5 the time. The combination of tart cranberries/ginger, crispy crust and rivers of caramel sauce is a winner – at Christmastime or anytime! Preheat the oven to 180C and grease a 2 litre oven-proof dish.

Combine the flour, sugar, butter, ground ginger, milk and fruit in a large bowl and mix well.  Spread the mixture into the prepared dish.

For the sauce, combine all ingredients in a small saucepan over medium heat.  Stir until the sugar is dissolved and the butter melted.

Pour the caramel sauce slowly over the back of a spoon over batter in dish.  Bake in a moderate oven for about 40 minutes or until firm in the centre – test with a skewer.

Serve immediately with custard. Do not let the pudding stand too long before serving as the sauce will be absorbed!

This is my entry into this month’s Sugar High Friday event, hosted by the lovely Zorra at 1 x umruehren bitte.  The theme is puddings – and who can resist those?!

« Roast duck with pancetta and potatoes – an alternative Christmas meal
Merry Christmas everyone! »