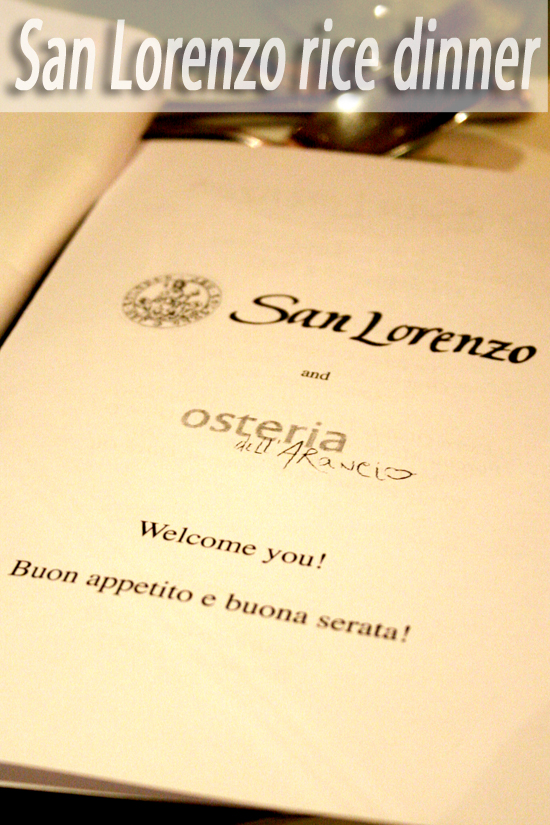 Those of you in London may have heard of San Lorenzo:  they are purveyors of fine Italian fare via mail order, fresh from Bella Italia.  But I came across them in a wholly different manner, via their most charming representative Sara’s blog.  Sara not only blogs and turns her had to photography, but she is also the “face” of San Lorenzo, tirelessly promoting Antonio and company’s wonderful wares.  So when this charming lady contacted me in late August proposing a dinner in London to sample some of San Lorenzo’s products, I agreed without hesitation.

The venue for the tasting was L’Osteria dell’Arancio, a friendly and informal Italian restaurant in that public transport dead-zone on the King’s Road midway between Sloane Square and Earl’s Court Road.  Johanna and I were amongst the first to arrive and immediately recognised Sara, who in turn introduced us to Antonio, one of the owners of San Lorenzo.  While we chatted, more people arrived, including Trig (who I recognised instantly from his blog), the charming Walid of Trusted Places, Krista of Londondelicious, and Celia Brooks-Brown.  Things got even better when glasses of Franciacorta Brut Millesimato 2003 were passed around, to accompany appetisers of arancini. These are deep-fried rice balls and are native to southern Italy.  Unsurprising, then, to discover that head chef Giuseppe De Gregorio hails from Naples – and trained under Antonio Carluccio amongst others.  If you ever have leftover risotto (unlikely, I know…), arancini are the way forward.  We had two flavours – one with porcini, tomatoes and peas, and the other with saffron, fontina cheese and ham.  The second was my favourite – but both were seriously delicious and seriously moreish.

From there we were escorted inside and to an upstairs function room with some really eclectic decor – particularly the cutlery-themed chandelier.  You try standing below a bunch of steak knives hanging precariously above you and not feeling a tad uneasy!  My only criticism was that, for our purposes the room was say too noisy – there was no way to close it off entirely from the main restaurant below us and I often struggled to hear what Antonio was saying about the San Lorenzo products – but that’s a minor gripe.  The star of the show for the evening was rice and Antonio and Sara explained various types of rice that San Lorenzo sell.  In particular, we tasted organic Carnaroli , organic Vialone Nano and organic black Venere rice, while Antonio explained the various ways of making a correctly creamy risotto.  All the rice was tasty, but the black Venere rice blew me away.  It was wonderfully nutty and chewy, not to mention spectacularly black.  While we moved on to tasting various porcini mushrooms in olive oil, I was still dreaming dreamy dreams of a rice salad with green and red peppers to show the black rice off to its best advantage. 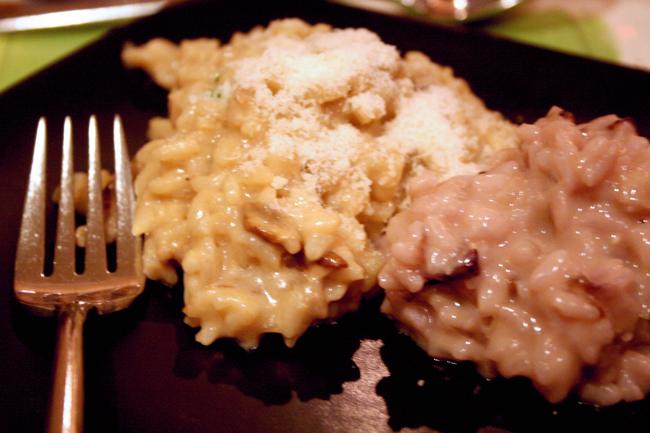 From there, we all decamped to the main restaurant downstairs for our meal.  I was seated next to Andy Hayler who turned out to be an interesting and amusing dinner companion – as far as I’m concerned, he seems to lead the perfect life!  First up for dinner were 2 bowls or risotto – one with porcini mushrooms and one with radicchio.  Both risotti achieved that perfect creamy balance between being too sloppy and being dry – perfect.  And much as I am a fan of mushroom risotto, it was the radicchio risotto with its slightly bitter bite that blew me away. I’d return to the Osteria purely for this. Up next was a somewhat perplexing dish of rice “pie” with duck ragu and porcini.  Yes, I know it looks like chocolate came with a caramel sauce, but let me assure you that it wasn’t!  The “pie” (more of a mould, really) was made of the wonderful black Venere rice which had apparently been used to line the bottom of a dish and then topped with duck ragu before being topped with another later of rice and baked.  The end result was intriguing and tasty (and confirmed my love affair with the Venere rice) but was way too heavy for my taste.  It could probably also have done with some sort of green accompaniment – a green salad perhaps? 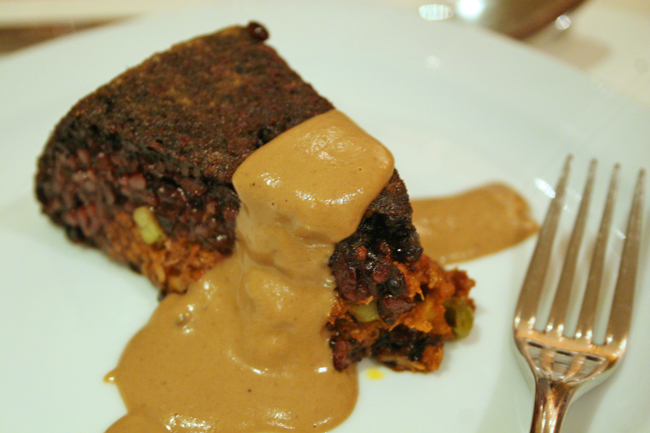 The dessert that followed suffered from the “last straw that broke the camel’s back” syndrome – yet more rice! This time, it was the creamy risotto variety again, but formed into a rice pudding unlike any I have eaten.  The rice puddings with which I am familiar are comforting, soupy affairs liberally spiced with cinnamon and the like.  This was a densely packed individual mould of a pudding which had the texture of slightly grainy cheesecake rather than rice.  I’m pretty sure that in a blind tasting I would not have identified this as rice pudding!  The pudding was topped with a rich dark chocolate sauce which I loved on its own, but which was probably a bit much for the pudding and overwhelmed any flavour it might have had.  Despite being described in the menu as rice pudding with raspberrieS, the only berry was one lone specimen perched on top – a couple more might have balanced the dish.  I did like the textural contrast of the toasted flaked almonds scattered on the plate though. To accompany the meal, we had three more wines from the San Lorenzo stable:  a 2002 Barbaresco (of which I had only one glass and remember very little) and a 2001 Barolo (of which I had several glasses and liked very much indeed – its reputation as the Rolls Royce of Italian reds is well-deserved).  With the dessert we had a glass of the excellent 2003 Ramandolo dessert wine which I could happily have drunk all night – a beautifully balanced sweet wine.

It was an interesting and informative evening with much to recommend it.  I met some of my fellow-bloggers as well as other interesting foodies that I might not otherwise have met; and Antonio and Sara’s passion for their products is obvious and infectious.  San Lorenzo plans to make these evenings a regular event and welcome anybody with an interest in Italian food and wine.  The full programme of events can be found here.

Thanks once again to both Antonio and Sara for a great evening!

« Pizza inspirations – fig, Brie and Prosciutto
Waiter, there’s something in my… topless tart! »