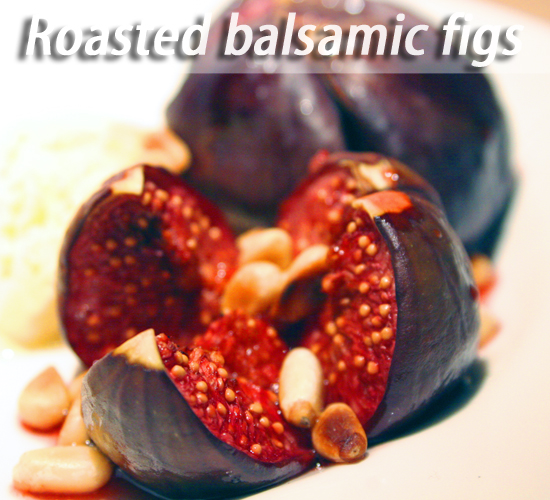 Aaaah, figs.  We are bang in the middle of their lamentably short season at the moment and I don’t seem to be able to walk past them without buying a few.

My mom used to rave about them – they had a tree in their garden when she was growing up in Pretoria and she would go all misty-eyed when describing how she would climb the tree and eat the warm, sun-ripened fruit.  But for some reason, you almost never saw fresh figs in the shops when I was growing up – maybe because they are so eminently perishable?  My mom bought dried figs but these didn’t appeal.  Too hard, too gritty, tooth-achingly sweet. And a rather unattractive shade of brown! It seemed you had to have a tree in your back yard to enjoy this particular pleasure!

Truth be told, we did in fact have a fig tree in our garden: a wild fig tree that seeded itself in some mysterious way in the steep rockery near the bedrooms.  We didn’t know what it was until it reached an age when it could produce its first crop of figs, but when it produced clusters of fruit its identity became apparent.  However, my parents were of the school of thought that anything you pick from a tree is fatally poisonous (my father also categorises biltong and yoghurt in this category…), and therefore we never did try to eat any of these figs, or even try to make jam with them.  This did mean that we provided an annual bonanza for the birds and, unexpectedly, a number of fruit bats that made nightly raids while the fruit lasted. 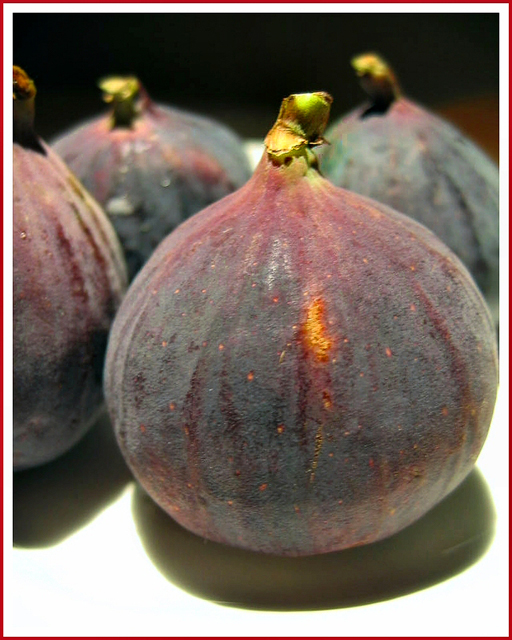 I have a very clear memory of waking in the middle of the night when I was still living at home, and my panic-o-meter going from 0-100 in a split second.  There was a scratching sound at the glass sliding door of the conservatory that separated my and my brother’s bedrooms from the garden.  I tiptoed out of bed and to my bedroom door – where I found my brother in a similar state of consternation at his bedroom door.  Slowly we crept into the conservatory – but there was no intruder to be seen.  Gradually my eyes adjusted to the dark and I followed the sounds to the ground just outside the glass wall.  There I saw a fruit bat, rat-like but with huge and beautifully delicate wings, who had gorged on figs and then stunned himself by flying into the glass of the conservatory window!  He was in the process of trying to pull himself upright and what we had heard was the scrabbling of his (substantial!) claws on the glass window.  Panic over, we stood there for a while looking out and realised that Bat Boy was not alone – there were four or five fruit bats swooping silently through the branches of the neighbouring seringa tree in the mooonlight, making smash-and-grab attacks on the ripe, heavy fruit.  It was a magical sight, like a little bit of wild Africa sneaking into suburbia.

The fig is an interesting culinary enigma – you’d think the purple orbs were the fruit of the common fig tree (Ficus Carica), but you’d be wrong.  What we regard as the fruit is actually the flower of the fig tree or, more correctly, multiple flowers forming a false fruit: a specialized structure called a syconium. This is a nearly-closed receptacle with many small flowers arranged on the inner surface, which means that the actual flowers of the fig are unseen unless the fig is cut open. The syconium has the fig’s classic bulbous shape with a small opening (the ostiole) at the end opposite the stem that allows access by pollinators. The flowers are pollinated by very small wasps that crawl through the opening in search of a suitable place to lay their eggs. Figs come in two sexes:  caprifigs (which are hermaphrodite, pollinated by wasps and regarded as inedible) and females (which produce edible figs).  Don’t worry too much about ingesng wasp eggs though – because the female trees’ female flower part is too long for the wasp to successfully lay her eggs in them, the wasps pollinate these flowers without leaving their eggs behind! Figs are among the oldest cultivated crops and were already well-known in Roman times, and nine fossilized figs dating to about 9400-9200 BC were found in the early Neolithic village Gilgal I in the Jordan Valley.

In any event, it is safe to say that the pleasures of fresh figs were largely lost to me until I moved to London.  But now, I’m making up for lost time 😉  It seems I can hardly walk past a packet of figs without buying a couple and telling myself I’ll decide what to make with them later.  Which is why I had some in the fridge the other night when I had been inspired by Cherrapeno’s beautiful fig dessert.  I made it with a couple of tweaks of my own and can’t recommend in highly enough in terms of simple pleasures and yummy contrasts:  hot, cold; sweet, sour; and soft, crisp. Marvellous.

Method
Wash and dry the figs. Slice a cross into the top of each one, being careful to cut almost to the bottom, but not right through – the fig must still be held together by the base.

Place the figs in an ovenproof dish and drizzle each one with about a tablespoon of good balsamic vinegar.  I mixed my balsamico with some wonderful caramelized verjuice syrup, but if you can’t get your hands on this, stick with the balsamico.

Pop the figs in the oven and bake uncovered at 180C until they start to soften and lose their shape – about 15 minutes.

In the meanwhile, toss a good handful of pine nuts into a no-stick frying pan over moderate heat.  Watch them like a hawk, stirring frequently, as they catch very easily.  Wait until they start to brown slightly and then remove from the heat and reserve.

When the figs are done, transfer them to plates, drizzle with the cooking liquid and sprinkle with pine nuts.  Serve with mascarpone (I only had vanilla ice cream on hand and that was OK, but mascarpone would have been better).

I am submitting this post to my friend Pille who is hosting this week’s edition of Weekend Herb Blogging.  You have until Sunday to get your entries in so what are you waiting for!

« We are the champions
Triple ginger layer cake »