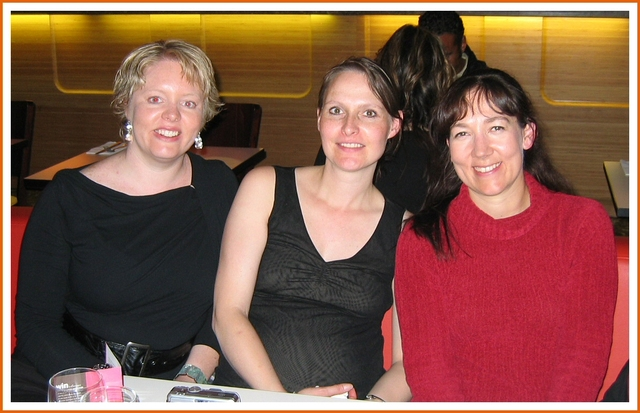 It’s not often you get to meet one of your favourite Antipodean bloggers AND eat a pizza topped with potatoes and onion marmalade in one evening…  These opportunities are few and far between and life is short, so you gotta take them when you can get them! It all started a few months ago when Johanna told me that Niki from Esurientes would be touring Europe with her chamber choir, and this year they would be visiting London.  So last night Johanna, and I duly made our way to the very lovely King’s College chapel in the Strand and heard Niki and her colleagues perform works from the 15th through 20th centuries.  It was absolutely beautiful – such gorgeously pure voices and not a wrong note all evening.  If they ever tour anywhere in your neighbourhood, please do go and see them!

After the performance, and being food bloggers, of course we headed out for a meal.  We hadn’t really made any big plans and were content to stick to the area between the chapel and Charing Cross, and the end result of some deliberation was that we made our way to Fire And Stone.  I had read about the place and was intrigued by reports that their pizzas featured non-traditional toppings and arranged on the menu by region.  I was equally intrigued to hear they have the largest pizza oven in the UK, if not Europe…

The restaurant is in Maiden Lane, equidistant from Covent Garden and the Strand, plus it serves food until late (a couple was seated near us at 11pm and were ordering food when we left!) which makes it perfect for a post-theatre meal.  The space itself is very un-London – positively cavernous compared to other eateries in the area, with a kind of retro-meets-the-Orient feel.  You ascend a short flight of stairs to find yourself face to face with a rather funky long red banquette down the middle of the room and can’t help but notice the gigantic pizza oven with its pebble dash chimney on your right.  Some reviews on various sites had complained about the bad service, but this seems to have resolved itself – we were seated almost immediately and service was attentive and friendly all night, despite the fact that most of the tables were full when we arrived.  The menu does exactly what it promises – a small selection of starters (including a meze platter, calamari rings and salads) followed by… pizza, pizza and only pizza.  Don’t bother looking for a margharita or a pepperoni pizza here.  Expect ingredients like pine nuts, mascarpone cheese, black pudding, potatoes, green Thai curry, mango chutney, and duck with hoi sin sauce (not all on the same pizza though!!).  The pizzas are loosely divided into regions (Asia, Australasia, Africa, the Americas and Europe) but with the exception of Asia, the regions don’t really give a clue as to the ingredients.  Still, it makes a change from the overly-familiar Pizza Express menu!

We skipped the formalities of starters and headed straight for the pizzas.  After an agony of indecision we ordered the three pies below and each of us had a third of each pizza. The Lom Bok (Asia) – mozzarella, hoi sin sauce, garlic marinated prawns, fire-roasted red peppers and spring onions, all drizzled with chilli oil.  The hoi sin sauce was used instead of a tomato base and the chilli sauce added a great zing that kept you wondering if the bell peppers had somehow taken on a heat of their own.  But the masterpiece here was the prawns – great big succulent things and not dried out at all.  This was probably my favourite of the night. The Byron Bay (Australasia) – basil pesto as a base instead of tomato sauce, mozzarella, mized marinated mushrooms, garlic and rosemary roast potatoes, caramelised onion jam and sour cream sprinkled with smoked paprika.  This was an interesting mix of flavours – although unusual at first, Johanna remarked that they “made more sense” the more you ate.  I was a little disappointed as I am usually a fan of rosemary potatoes on pizza – but these potatoes were diced into tiny little cubes (as opposed to really thinly sliced rounds) and were a little dry.  Also, as the pizza got colder, they became more stodgy and less appealing.  Still, the mushrooms had a terrific flavour as did the onion marmalade.  But this was probably the least successful of our choices. 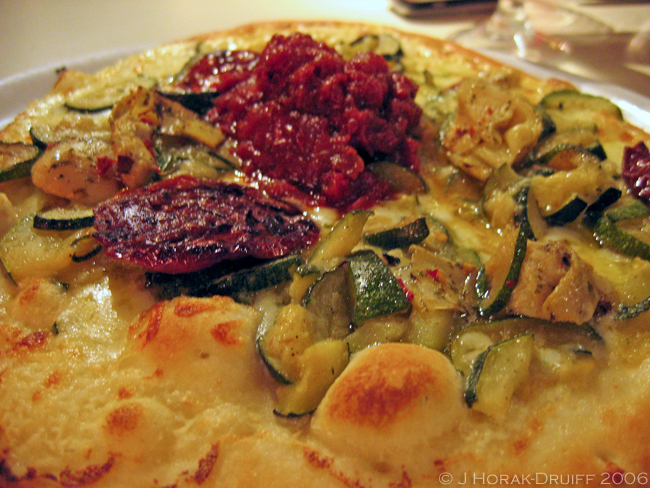 The Lombardia (Europe) – rosemary-infused mascarpone cheese sauce as a base, mozzarella, roasted courgettes, marinated artichokes, sun-dried tomatoes and a blob of slow-cooked tomato chutney.  This was also lovely – all the flavours came through distinctly and the tomato chutney was smoky and delicious.  Runner-up of the night. The pizza dough itself was a bit of a double-edged sword.  Although the bases were fairly light and very crisp, they lacked the eccentric irregularity of traditional Italian pizzas and there was certainly little or no evidence of the yeasty, enormous air bubbles of a traditional crust.  But on the other hand, the bases were properly crisp and did not collapse into a soggy mess under the weight of the toppings.  So all in all, they were right for what Fire and Stone is trying to achieve, even if they won’t please the purists. 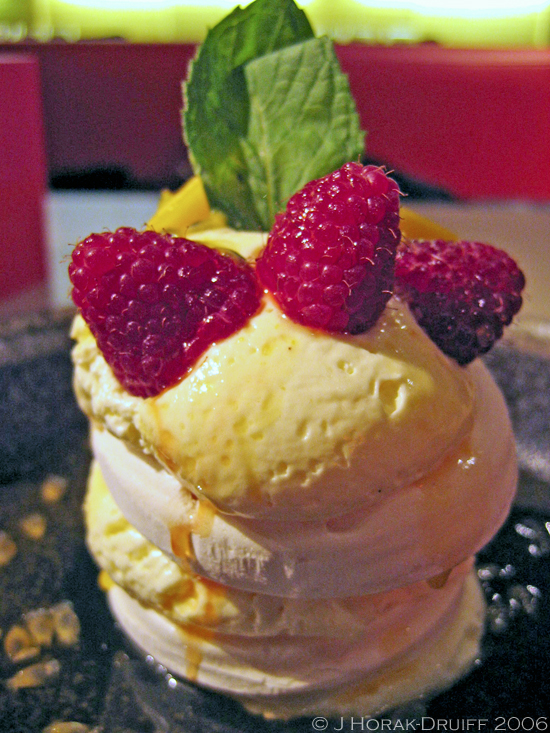 The only one who could face dessert was Johanna (who is eating for two with enviable gusto ;-)).  Although the menu features an unusual caramel & banana sweet pizza, even Johanna could not face more carbs, so she went for the raspberry and passionfruit pavlova.  It was beautifully served, but the whipped cream had been sweetened almost to the level of the meringue – which kind of defeats the object!  I opted for an absolutely heavenly dessert wine – Bowen’s Folly Noble Late Harvest Riesling – from the Robertson region in South Africa! I had never heard of this estate, but will surely look out for it in future.  The colour was like whisky – a very deep amber and the nose was pure honey with touches of apricot.  On the palate, I got candied peel and dried apricots, ending in a lovely, clean finish.  Truly impressive – and a bargain at £4.25 for a 175ml glass.

All in all, I was impressed with Fire & Stone.  I have always been a fan of exotic toppings and these are few and far between in London.  After some debate, the compromise reached on a verdict was that this is better than going to Pizza Express, but possibly not as nice as Strada.  And at between £7 and £9 per pizza, a very good deal indeed.