Hallelujah!  Spring has (finally) sprung, the grass is riz, no need to wonder where  the flowers is – they are all over the place!  In fact, for the past week or so I have started almost every day by getting up and heading into the garden with my camera to photograph our absolutely glorious tree which is just a mass of heavy white blossoms.  I have no idea what kind of tree it is (any suggestions gratefully received!) but I do know that it is one of my favourite things about where we live.  It’s as tall as the house, wider than the garden, and as deciduous as you could possibly wish for.  In summer, its dense green foliage makes our garden a relatively private place to suntan and entertain.  In autumn (if the summer has been hot enough), it is a mass of oranges and yellows as the leaves turn.  In winter, it stands like a skeleton, weathering the winds and frosts.  And then one day in April, the tiny buds all over the bare branches burst open and it turns into a great big meringue of a tree.  When I walk into our bedroom as I come home from work, it fills the entire window and cheers me up no end.  For a girl who grew up in a city with no defined seasons (too temperate, you see…), this spring thing is a never-ending source of wonder! 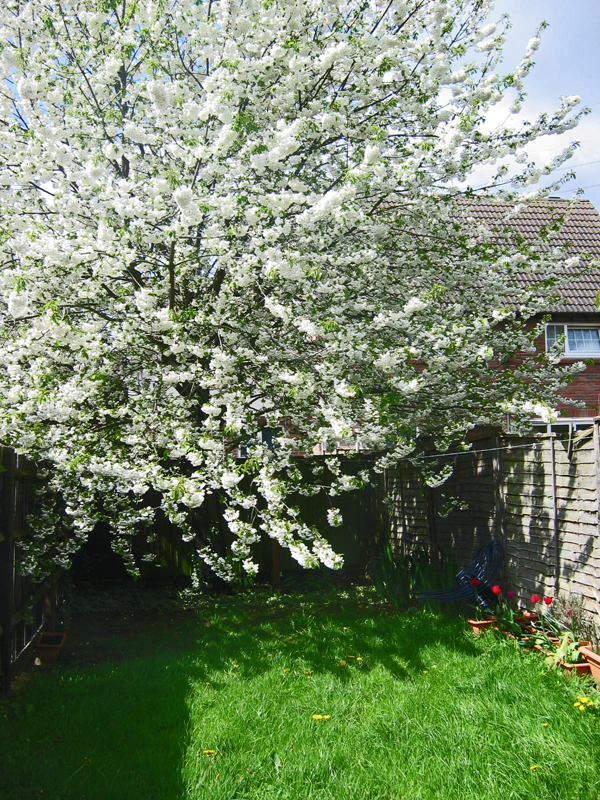 Of course, the other fabulous thing about spring around these parts is the spring vegetables, and seeing them in the shops always puts me in the mood for a dish that my sister-in-law Paola taught me:  pasta primavera (primavera being the Italian word for Spring).  Pasta primavera was apparently invented by Sirio Macchione, owner of Le Cirque in NYC, in the mid 1970s.  When asked at short notice to prepare a communal meal for foodies and food critics, he gathered together what he had in the kitchen and emerged with a dish of pasta and spring vegetables – voila, pasta primavera.  One of the diners that night happened to be the food editor of the New York Times who wrote about the spactacular new dish and soon patrons at Le Cirque were clamoring for it.  A star is born. 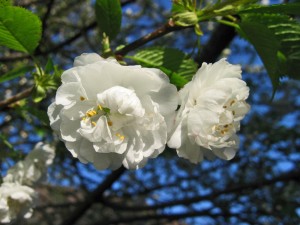 Now the nice thing about pasta primavera is that you can make adjustments to suit your tastes, pocket and what’s in your fridge – and I do love a recipe that you can mess about with!  I have seen recipes with and without tomatoes, pinenuts, broccolli, carrots, spinach, snow peas…  It really does seem to be a “what’s in the fridge” kind of ingredient list, but keeps olive oil, garlic and Parmigiano as its constants.  Unlike many recipes, Paola’s version is not tomato-based and is deliciously creamy – not to mention childishly simple, so it gets my vote every time.  Buon appetito!

about 100g of mascarpone cheese

Salt and pepper to taste

Boil the pasta in plenty of salted water until al dente.  Drain and keep warm.  Crush the garlic, chop the zucchini and leeks and shell the peas (if using fresh).  Saute the leeks, garlic and zucchini in olive oil until they start to soften, then add the peas and continue cooking until everything is cooked but still crisp.  (If using asparagus, chup the spears into bite-sized chunks and add at the same time as the peas.)  Rinse the spinach leaves and put them at the bottom of the pot that you used for the pasta, then return the pasta to the pot – the heat will wilt the spinach leaves.  Stir in the mascarpone and the vegetables until the cheese has melted and the vegetables are evenly distributed.  Serve in bowls topped with generous amounts of shaved Parmigiano.

The flavours are mild but creamy, so I woudl suggest something crisp and fairly light to go with it.  A fruity South African chenin blanc could do the trick, or possibly even a Chilean Sauvignon Blanc (which I was told last night is good with all cheese…  see Andrew, I do pay attention!)

« There and back again…
David Lebovitz does Borough Market »