You are here: Home / Markets / David Lebovitz does Borough Market 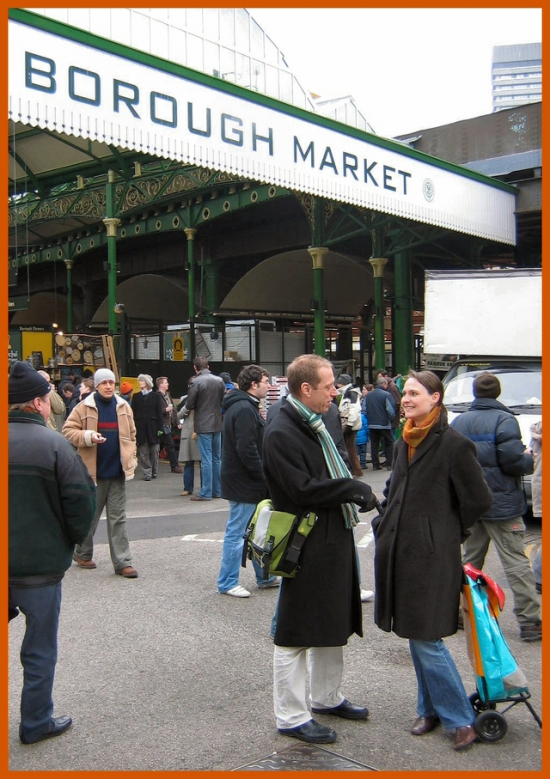 One of my favourite food bloggers these days is David Lebovitz, an American who blogs from Paris (when he has time, in between writing cookbooks and leading chocolate tours!!).  So I was thrilled when Johanna called a few weeks ago to let me know David would be in town.  Of course, if you love food, there is no better way to spend a Saturday morning than rambling around Borough Market, and since David hadn’t been and Johanna and I were due a visit, that’s where we decided to meet up.  We found David sensibly ensconced outside Neal’s Yard munching on a toasted panini (or similar!) absolutely oozing the most divine cheese and onion flavours.  If I hadn’t already had breakfast, David would have been in grave danger of being mugged for his panini… 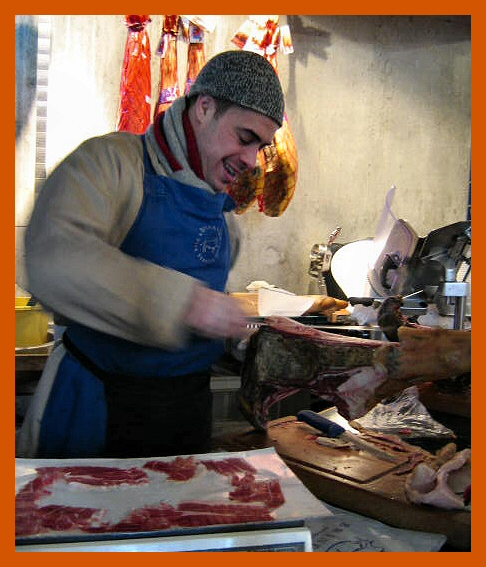 But luckily he was spared bodily harm and the three of use set off into the market, chatting, nibbling and generally having a ball.  The first stop was Brindisa, home of all things Spanish and delicious in London, where a most charming young man let us take his picture while he expertly sliced our jamon. There were a couple of hams to choose from but both Johanna and I made a beeline for the Joselito Gran Reserva Iberico ham (made by a small family business from pata negra pigs and reputedly the best ham in Spain).  A wander around the shop also led us to their splendid selection of Spanish vinegars and oils, which were displayed for tasting – and ideal for photographing!  All kinds of interesting stuff like Spanish Jerez vinegar and of course a superb selection of olive oils. From there, we moved on to inspect some of the wonderful fresh produce and meat, nibbling on little free samples wherever we went.  It’s actually quite astonishing how much stuff you can taste in a morning at Borough – everyone is so proud of their wares and David remarked on how friendly all the stallholders are, and how willing they are to chat to the punters.  Funny how it takes a visitor to point out the good things about your home town… 😉 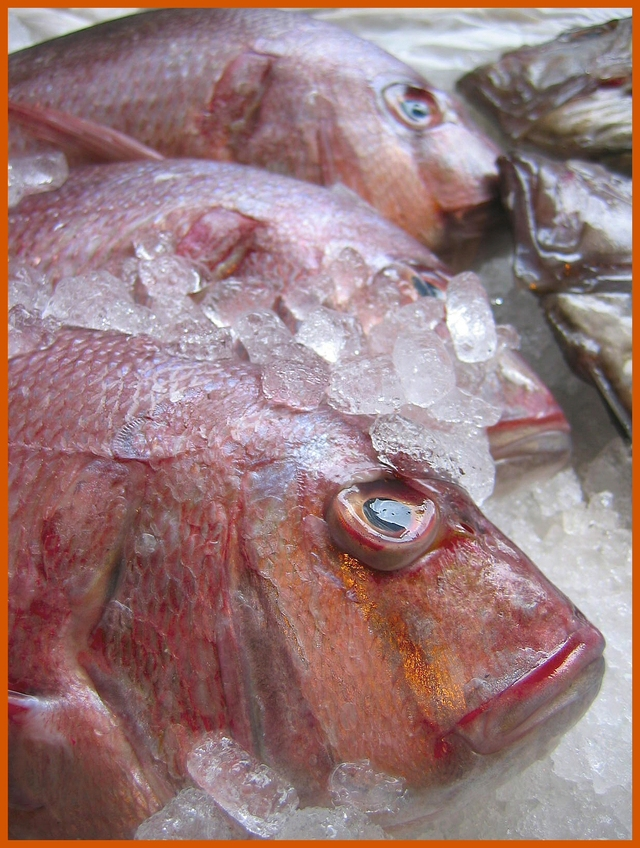 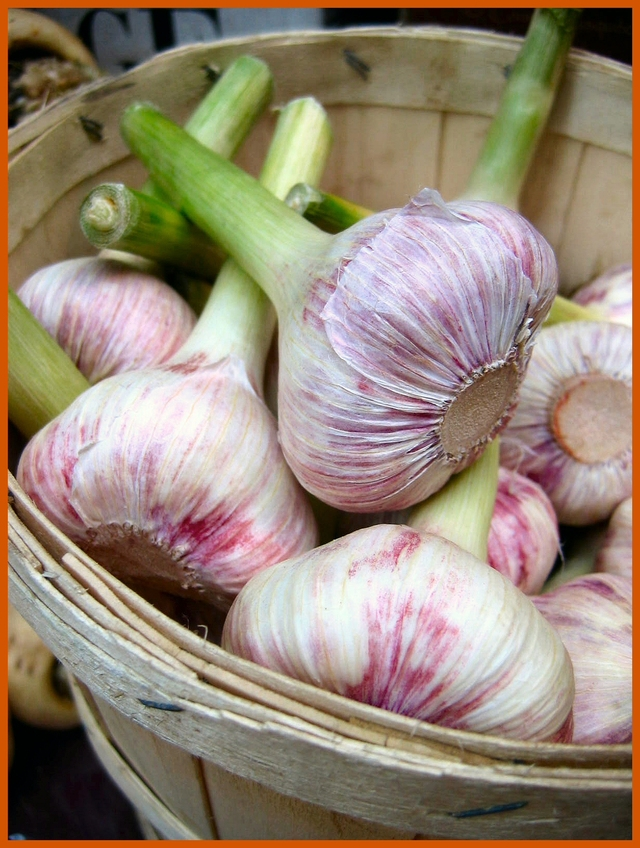 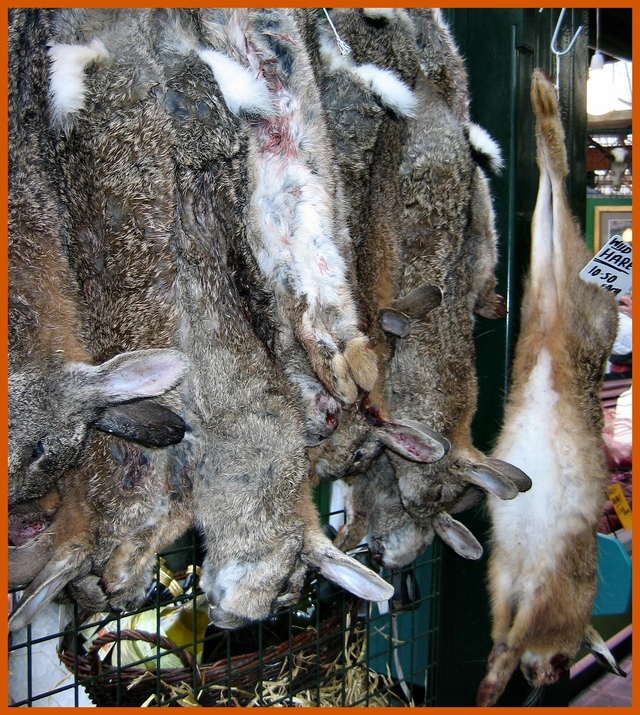 A wander around the fresh produce stalls brought us (amongst other things) to these three items.  First up, at one of the butchers that always has game (name escapes me now) & usually has some sort of animal hanging up outside, there was a collection of fresh rabbits and, on the far right, a fresh wild hare.  Now to someone who grew up in the suburbs, hare & rabbit seem to be much of a muchness, but in the chiller cabinet they had rabbit and hare meat side by side – and they couldn’t be more different in appearance!  Rabbit is to hare what chicken is to ostrich – hard to believe the living beasts look at all similar.  At one of the fruit and vegetable sellers (the one with the singing cashiers!), we found every sort of garlic – smoked, pink, white, giant… and these delightful rose-coloured bulbs.  And of course the fishmongers and their beautifully fresh wares always leave me with the urge to rush home and toss some fresh fish on the BBQ… 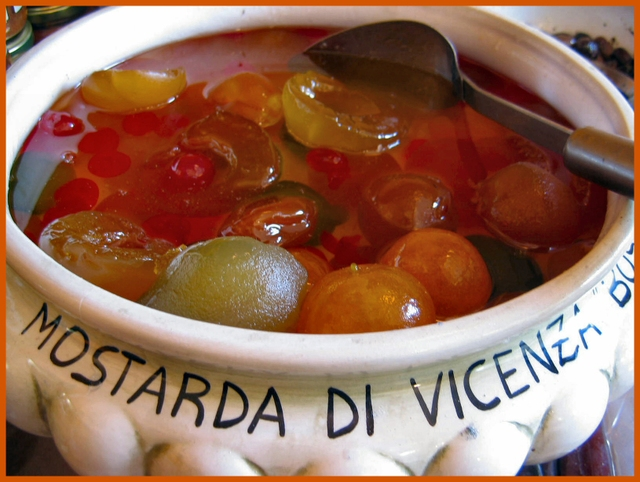 As we wandered in and out of the shops surrounding the market, we popped into Gastronomica, a charming little Italian deli where Johanna wanted to get some mortadella.  The mortadella was so redolent with truffles that the smell filled the entire shop while the meat was being sliced – heavenly!  While Johanna was getting her truffle fix, David and I were wandering around taking photos when David turned to me and handed me what appeared to be half a glace cherry on a stick.  “Here – try this.  It’s mostarda!”  Popped it in my mouth and yes, it was indeed a cherry in sweet syrup… but then I got a hit of sinus-clearing mustard.  Wow!!  What a little flavour bomb!  It turns out that mostarda is an Italian relish and does indeed consist of fruit that had been preserved in a sweet syrup, but the unique touch is to add some powdered mustard seeds, for that palate-cleansing kick. According to this (Italian) Wikipedia entry, the word mostarda comes from the Latin mustus ardens or burning must (must being the fermented grape juice that originally formed the base for the syrup, and the burning coming from the powdered mustard seeds) and it is supposedly mentioned in writings as far back as the 1300s.  However, it is believed to be an even older recipe than that because the use of swetness and spices was a common way for the Romans to preserve fruit, and it seems likely that this is where modern Italians got the idea from.  There are variations of it made from Piemonte on through the Veneto and down into Emilia Romagna, most of which differ in terms of the fruit used. Amongst otheres, you find Mostarda di Carpi (apples, pears, quinces and walnuts), Mostarda di Uva e Fichi (figs and candied citron), Mostarda di Mantova (apples and pears), and Mostarda di Cremona (made with mixed fruit, and probably the best known).  You will notice that the tureen in Gastronomica said “Mostarda di Vicenza”, but from what I can gather this is made with apples, pears and quinces, whereas what I had far more closely resembled Mostarda di Cremona, so I am going to assume it was Cremona that I tasted.  Either way, it was totally delicious and I can imagine few better ways of rounding off a meal than with cheese, biscuits and a spoonful of mostarda.  Thanks for introducing me, David! 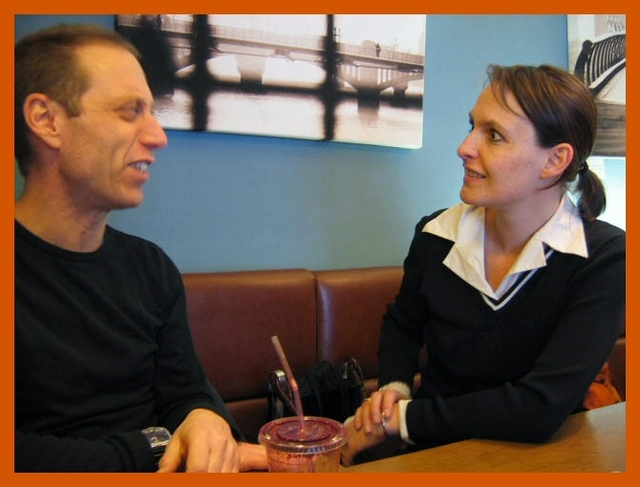 All this strolling and tasting is hard work, so we thought it was time to grab a cup of coffee – (not at Monmouth where David had been severely told off earlier in the day for unintentionally including an out-of-focus image of somebody in his photograph…  See how we food bloggers suffer for our art! ;-)) and sit down to warm up and chat.  We had a great time discussing the vagaries of living abroad, the vagaries of food blogging, and of course drooling over the idea of attending a chocolate tour in Paris with David.  All too soon, it was time for David to move on and so we said our goodbyes and resolved to meet up again.  Johanna and I swung back through the market where I collected my Joselito ham, a fresh ciabatta, some huge fresh artichokes, and stocked up on Gloucester Old Spot bacon from The Ginger Pig, before heading home after an afternoon well spent.

Come back soon, David!  It’s only a couple of hours on Eurostar 😉