Did I ever mention that I’m not from around these parts?  😛  Well, erm, possibly yes.  And that means that a lot of food that I am now eating was entirely new to me five years ago when I arrived.  I mean, to give you an idea, a well-known store in my hometown was in the late 1990s labelling pak choi as savoy cabbage!  And the thing is, nobody really knew the difference, so they just accepted it – me included.  Boy, was I in for a surprise when I got to London and dioscovered what savoy cabbage actually looks like!!  Some of the other things that we never really ate were parsnips, swedes and celeriac.  And one other vegetable that I had heard of but had no idea what it was or tasted like was the Jerusalem artichokes.

Now Nick and I have always been rather fond of eating globe artichokes, boiled and then dipped leaf by leaf into garlic butter (for me) or vinaigrette (for him), drawing each leaf through our teeth to get every scrap of delicious flesh off them and finally pulling out the choke to get to the meaty heart below.  Globe artichokes (cynara scolymus) are a relative of the thistle family and are in fact the buds of the plant – if you can resist eating them and leave one to flower, they end up making huge mauve blooms.  [Hey!  And we aren’t the only ones being misled – a site selling stock photos is flogging this as a photo of an artichoke flower – and it’s actually quite obviously a protea, the South African national flower!!!] Until we got over here to London, we had a vague idea that the difference between Jerusalem and globe artichokes lay in some small variation in the shape or the colour, but that they were basically variations on a theme.  Hah.  Funny how wrong you can be!

The Jerusalem artichoke is a misnomer rather like the Holy Roman Empire – all the parts of its name are misleading.  It is neither an artichoke, nor does it have anything to do with Jerusalem!  In fact, it does not even belong to the same botanical family as globe artichokes.  The Jerusalem artichoke actually a type of sunflower (helianthus tuberosis) – or, more correctly, the tuberous roots of a type of sunflower.  And as for the Jerusalem bit, there is speculation that this is a corruption of the Italian word for sunflower, girasol.  This is also the reason why they are sometimes called sunchokes, I would imagine.

Our misnamed, knobbly friend is a native of North America and was apparently growing wild along the eastern seaboard from Georgia to Nova Scotia.  The explorer Samuel de Champlain found them being grown by native Americans in Massachussets in 1605 and took them back to Europe with him where they were sold in France as topinambours.  They were popular in Europe but later fell out of favour as they were thought to cause leprosy (!!), probably because of their gnarled exterior which rather resembles a giant ginger root. 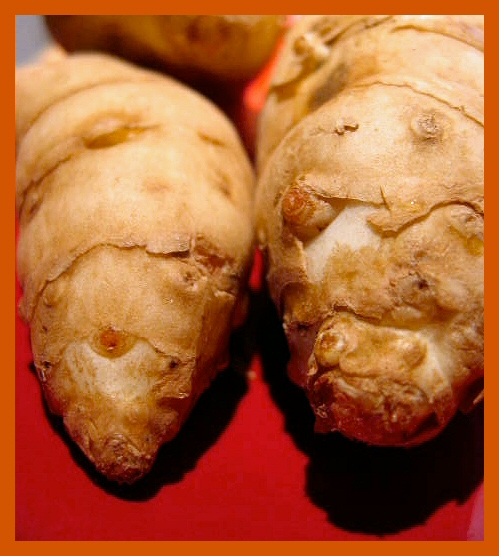 I would say a far more troublesome characteristic is described in the following passage written by John Goodyer in the early 1600s:  “But in my judgement, which way soever they may be drest and eaten, they stir up and cause a filthie, loathesome, stinking winde with the bodie, thereby causing the belly to bee much pained and tormented, and are a meat more fit for swine than men.”  Oh dear!  Time to fire the entire marketing team, I would say.  The reason behind this is that unlike the potato (where the carbohydrates consist of amylose and amylopectin), the Jerusalem artichoke’s starch is in the form inulin, a polysaccahirde which is not easily digestible by everyone.  But the good news is that cooking does go some way to alleviate this problem…  Another benefit of storing starch as inulin is that Jerusalm artichokes are very diabetic-friendly, and apparently Jerusalem artichoke flour is good not only for diabetics but also people with a wheat allergy.

So what can you do with your tubers?  Well, they can be eaten almost any way you like:  raw, fried, baked, boiled, mashed… Here are some ideas to get you started.  As for me, I decided that my first foray would be soup and in preparation, I peeled the ‘chokes (although you don’t have to) and chopped them up.  You expect their consistency to be like a potato but nothing could be further from the truth – they are crunchy in much the same way as radishes are, and a quick nibble on a raw piece revealed no artichoke taste, not to my tastebuds at any rate. Oh well.   Dumped them in a pot together with the rest of the vegetables (see recipe below) and simmered them.  And about halfway through the cooking time, the most wonderful nutty, earthy smell started to emanate from the pot.  I could not believe that the innocuous little chunks I’d put in the pot earlier could produce that smell, but there was no denying it:  the hint of artichoke was definitely there.

While making the soup I also chopped tome parsley from my little windowsill herb garden and fried a chopped rasher of smoked bacon till crispy, so when the soup was finally ready, I was waiting for it with my garnishes.    But the proof, as they say, is in the pudding so the moment of truth came when I tasted the soup.  It was extraordinary:  creamy without being too rich, comforting without being too boring – and very definitely tasting like artichokes!   I can also recommend the smoky bacon as garnish for the soup as it perfectly offsets the sweet, nutty flavour of the soup.  Congratulated myself heartily on my wonderful discovery and wondered why I had never bothered to eat these before – apparently they grow easily and well in South Africa, but we seem to have less of a tradition of eating them.  Maybe time to change that!  The recipe below is slightly adapted from one on Allrecipes.com – which stood out from the crowd mainly by virtue of the fact that it adds brandy to the soup 😛

1/4 cup of butter (I used half butter, half olive oil]

Salt and pepper to taste

Peel (or thoroughly scrub) the Jerusalem artichokes and chop roughly.  Peel and dice the potatoes, mince the onions and crush the garlic.  Heat the butter in a large saucepan over medium heat until frothing, then add the onions, garlic, potatoes and artichokes.  Cook covered on low heat for about 10 minutes.  Uncover and cook for a further 10 minutes.

Stir in the brandy and flour and cook for about a minute.  Gradually stir in two cups of stock, stirring continuously until the soup boils.  Simmer until all the ‘chokes and potatoes are soft enough to mash (probably about 10 minutes).

Transfer to a food processor (or use a wand mixer) and puree until smooth.  Add the last cup of stock if needed (I certainly needed it – the consistency was really thick!)

Return to pan, add cream and season well.  Reheat, spoon into bowls and garnish with a blob of thick cream, a handful of chopped parsley and a few crispy bacon bits.  Serve with crusty bread to mop up the last delicious drop.

« Too much information – let’s get random!
Announcing EoMEoTE#14 – the parody poetry edition »