You are here: Home / Events / EoMEoTE / EoMEoTE#12 – Night of the Living Bread 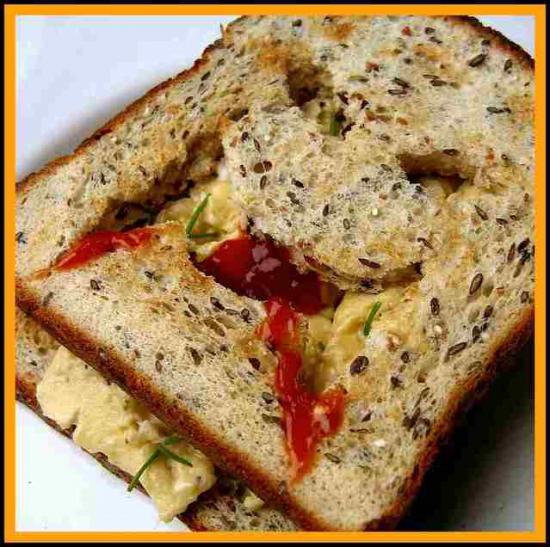 Hubby: [shuts door] Phew, we must have fed sweets to half the kids in London!  I mean skeletons, vampires, mummies, witches – you name it, it’s knocked on our door!

Cooksister: You can say that again – talk about being on a sugar high!!  Some of them won’t be sleeping for weeks!

Hubby: Well, all this generosity is hungry work. What’s for dinner?

Cooksister: Oh, it’s too late to make a proper dinner – why don’t I just rustle us up some eggs on toast?

Hubby: OK – I’ll jump in the shower and be down in a minute.

Cooksister: [goes to kitchen, toasts some Burgen soya and linseed bread, whips up some scrambled eggs with double cream and chopped chives.  Humming to herself.] Perfect – what fab looking sandwiches.  Wait a minute – did that piece of bread just move?  What the… aaaaiiiiiieeeeeee!!……

Hubby: [coming downstairs] Honey, did you say something?  Hang on, where are you?  And why did you pour ketchup on my sandwich – you know I don’t like it.  Umm, where are you??  Yikes!  The sandwich just latched onto my arm!  What the hell did you put in it?  Nooooo, let gooooooo……

Thanks to the ever-fabulous Moira for hosting this month’s edition of EoMEoTE and for choosing such a fun theme!  Make sure to pop over to Moira’s during the course of the week to check out the round-up!

« Hola from Chihuahua, Mexico!
The “I confess!” meme »