You are here: Home / Events / EoMEoTE / EoMEoTE#9 – Harry Potter and the Maker of Fire 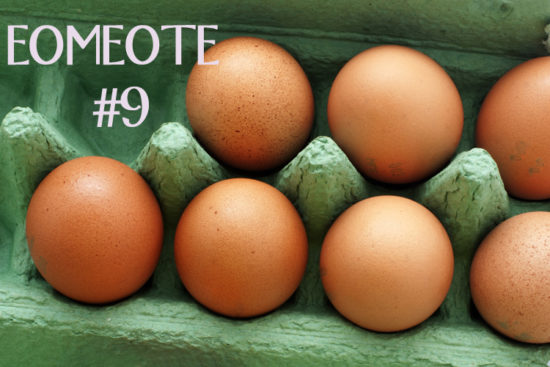 “Come on, Harry!” exclaimed Hermoine. “I knew that going to Hagrid’s cabin before afternoon classes was a mistake! We can’t possibly get back in time for the new professor’s class now.” There was a slightly manic glint in her eye that always made the boys uncomfortable. The last time they’d seen it was when Gilderoy Lockhart first came to teach at Hogwarts, which was hardly surprising as the new professor was rumoured to be even more swashbuckling that Lockhart. Harry looked at Ron, rolled his eyes, and they continued to dawdle along behind Hermoine, examining the box that Hagrid had given them. It was some sort of puzzle – nothing was ever simple with Hagrid – and he had carved into it the words Fry, poach, scramble or boil – but first to solve this you must toil!

“What do you think it means?” asked Ron. “I mean, ‘scramble’ could mean that we have to climb up somewhere high. And poach means we might have to steal something from Slytherin or… or… I don’t know.”  Harry didn’t reply – his mind was focused on next week’s Squidditch game.  After the EU had declared Quidditch an unsafe game for anybody under the age of 25, Hogwarts had been forced to disband its Quidditch teams and Harry sorely missed the thrill of the game.  The replacement, Squidditch, was safer but not nearly as much fun:  teams of students competing to cook the most tender calamari, using only magic.  Harry didn’t like the smell or the taste of the calamari – not to mention the awful stench when things went wrong. He was just wondering what to make for the big match next week when he was cruelly yanked back to reality by a blow to the head, followed by some rather apologetic flapping and hooting.  “Pigwidgeon!!” yelled Ron, “You clumsy bird!!  You nearly knocked Harry over!”.  Pigwidgeon hooted again, rather huffily, and made her weary way to the Owlery.  Ron bent down to pick up the parcel.  It contained the usual array of stuff – a hideous, chunky sweater knitted with a great deal of love my Mrs Weasley, a long letter, and some food – including a string of sausages.  “What good are those?” lamented Ron.  “I mean, we get food, we don’t have to make our own!”  Still grumbling, he proceeded to read the letter out loud.  “Blah blah blah… ‘and don’t forget Great-Aunt Winnifred’s birthday – it’s nearly the end of the month, you know!’  Where does she get this stuff from?” said Ron, shaking his head in despair as they entered the main Hogwarts building, just in time to meet their new Charms teacher.

Hermoine skipped into the classroom ahead of them.  Skipped??  Clearly, something was up.  What was up became apparent when their teacher entered the room.  He was male.  He was young.  He was dressed in khakhi shorts and he was very tanned. “Hello, class!” he boomed.  “My name is Tertius Van der Toor.  While Prof Flitwick is on sabbatical, I’ll be taking your Charms classes!”  Rather a lot of the girls in the class seemed to be rather flustered and blushing furiously.  Harry turned to Hermoine to poke fun at them and was horrified to find her staring at Prof Van der Toor with the same adulation as the other girls.  It was going to be a long class.  “Right,” boomed the professor, “let me tell you a bit about myself.  I am a South African wizard and I’m going to start by teaching you some of the charms you need to live in the veldt in Africa.”  All the girls were furiously taking notes. Harry was still trying to figure out Hagrid’s puzzle.  “You must remember, Africa is a harsh place.  I remember well the times I’d go out hunting with my trusty Limpopo Ringtail, Jock, and we’d be out there for days with nothing but rocks for pillows, the stars for a ceiling and our, ahem, considerable skill as hunters to keep body and soul together.”  “What the heck’s a Limpopo Ringtail?” asked Ron to no-one in particular.  “It’s a kind of magical hunting crocodile,” hissed back Hermoine, “don’t you ever do any extra reading??”

“Let’s start with this one, class.  Picture the scene.  You’re tired and cold and hungry.  You’ve been hunting all day with your trusty Ringtail, and finally you’ve managed to bag a springbok with your crossbow.  But the last thing you want to do is prepare the damn thing.  So what you need is a spell to get it from carcass to casserole without wasting too much time.  That’s why I perfected this little charm.”  With this, Van der Toor spun around and yelled “carbonarum!!” in the general direction of a large chunk of wood that was doing duty as a doorstop.  In an instant, the wood was a glowing chunk of charcoal – ashy on the outside and glowing red within.  Just perfect to sizzle some steaks on.  And as if on cue, Van der Toor produced some marshmallows and sticks and invited the class to enjoy the advantages of having an instant log fire in the classroom.  Everyone surged forward – everyone, that is, except Harry.  Inspiration had suddenly struck.  “Ron!  What was that your mother said in the letter – about Aunt Winnipeg or something?” “It’s Winnifred, actually” said Ron, “and she reminded me about her birthdday at the end of the month.”  “Exactly!  The end of the month!  Don’t you remember that spell that Hagrid taught us in our first year?  Let me think now… get the pronounciation right…  Eh – oh – meh – oh – teh…”  And as if my magic (hah!) Hagrid’s puzzle box opened up.

“What is it, what is it?” asked Ron as Harry slowly opened the lid.  “It’s, well, an egg” said Harry flatly.  “Maybe a phoenix egg?  Or a dragon egg??”.  “No, just a chicken egg” said Hermoine, who had torn herself away from the professor to come and see what they were doing and was now peering over Harry’s shoulder.  “All that drama – for an egg??” wailed Ron.  “You three back there!” boomed Van der Toor again, “What do you think you’re doing?”  “We were just…” started Hermoine when he cut her off. “Nobody plays the fool in my classes!  All three of you – out!  50 demerits for Griffyndor and no dinner for the three of you!  Off you go – get to your common room and stay there!”.  “But professor, it was all my fault…” started Harry.  “Now, now Potter, I won’t have you playing the martyr in front of your friends.  Off you go – all three of you – before I unleash another bushveldt spell!”

Sitting in the common room, dejectedly, half an hour later while everyone else was trooping down to another fabulous Hogwarts dinner, Hermoine and Ron were still bickering about whose fault it was that Prof Van der Toor had noticed them at the back of the class.  Harry was looking speculatively at Hagrid’s egg.  “Ron”, he asked, “did you say your mum sent you sausages?”  “Yes”, said Ron, “Why?”  “Well, I was just thinking…  you have sausages, I have Hagrid’s egg, and Hermoine, you always have some bread stashed away for toasting over the fire with tea.  Maybe we could, you know, give Van der Toor’s spell a try and get ourselves some dinner.  Now let’s see… if we put the bread down there, break the egg over it like this… yes, that’s right Ron, the sausages over there…  Now stand back!”  The other two needed no further invitation and dived behind the largest of the sofas as Harry aimed his wand directly at the plate and yelled “CARBONARUM!!”

There was rather a lot of smoke and some unsettling sizzling noises, but when the smoke cleared they were faced with a steaming plate of fried egg, toasted bread and ever-so-slightly blackened pork sausages.  “Aaaaaah, just like dad used to make in the back yard on summer evenings” said Ron as he munched happily on a sausage.  “Very nice, Harry” said Hermoine as she mopped up her perfectly runny yolk with a toast soldier, “but why does everything have that greenish-yellow cast to it?”  “Umm, I don’t know” admitted Harry, “but I suspect that I still have to learn the photoshopibus spell if I really want to get the hang of this lot…”