You are here: Home / In my pantry / The ghost of summers past – an antipasti platter (With apologies to Hilaire Belloc)

I can live with the English winter weather up to a point – and that point is sometime around now.  Up to the end of December it’s all fun and exciting and Christmassy, with sparkly lights and mulled wine and woolly hats and scarves.  But once the festive season hype has died down, the novelty wears off and the rest of winter stretches out in front of you like a jail sentence. And you know that the coldest weather is probably still up ahead.  It’s at times like these that I have to look at photographs of last spring to convince myself that the world will ever be anything but bleak and grey again, and my thoughts turn inevitably to sunny memories of summer.  One of the last sunny summer meals we had, probably in early October, was one Saturday where I put together an absolutely delicious antipasti platter.  We had Tirolerspeck from our Munich trip and saucisson sec from our Paris trip and I decided it was time to sample these as part of a summer spread.  Plus, I wanted to try out my awfully elegant olive dish that I’d bought a month or so ago at Columbia Road market.

Oh, and did I mention that I am just a sucker for this kind of many-little-dishes-at-the-same-time eating??  It takes me straight back to my childhood when my mom would fetch us from school, take us home and (if it was summer) fix us what she used to call a picnic lunch.  This was invariably served on the most iconic 1970’s picnic trays – they were moulded hard plastic covered in some sort of fake wood effect and were moulded into three or four different-shaped compartments with high ridges in between so that you could effectively isolate each item you were eating.  AND there was a little round space for your glass or can – how cool is that??!? On these epitome-of-70s-cool plates my mom would put some cold roast chicken, some polony, slices of Granny Smith apples, either potato salad or coleslaw, some little blocks of cheddar cheese, Provita wholewheat biscuits and a dollop of mayo (always Hellmanns).  Then we’d go to her and my dad’s bedroom where there was aircon and a sunny little balcony and have lunch there.  We would often laze around in the sun talking or reading long after the food was finished, while our two cats (who were notorious beggars and thieves and therefore locked out of the bedroom for this feast) waited anxiously at the bedroom door.  So you could say I was conditioned from childhood to enjoy eating like this – little bits of a variety of stuff. 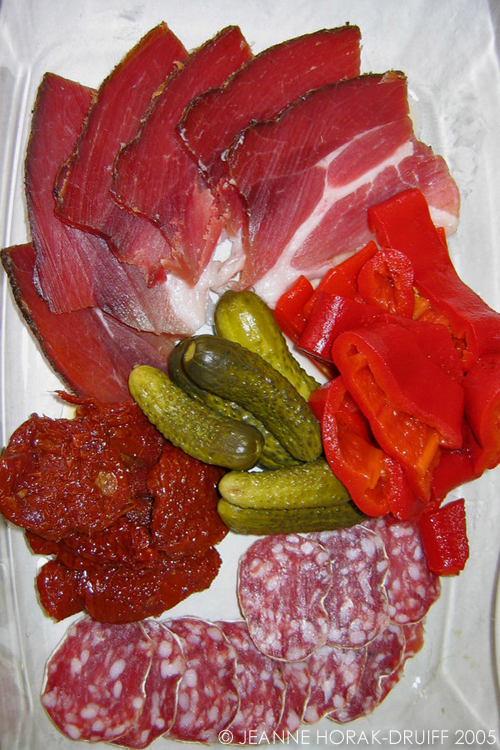 Anyway, one quick trip to Lidl later, and we had the makings of an antipasti feast. Let me just say that I generally go to great lengths to avoid Lidl as it is probably on the list of Top 10 Most Depressing Shops in the World.  Full of vaguely furtive-looking citizens of former Soviet states, nervously looking over their shoulders for any representative of the British immigration authorities while they collect armfuls of cheap tinned beans and head for the till where (I swear) the cashiers are competing for the Surliest Scowl of the Month award.  But there is no better or cheaper place to find imported German, French or occasionally even more exotic foods.  I mean, it stuns me that they can provide me with a delicious potato, yoghurt and spring onion salad that’s a) not particularly full of preservatives and b) about the same price as a totally arbitrary potato salad from a British supermarket – made in Germany. Anyway, so because it’s close to home and looked the most likely to have to stuff we needed, that’s where we went and boy, we were not disappointed, as you can see from the pictures above and below. 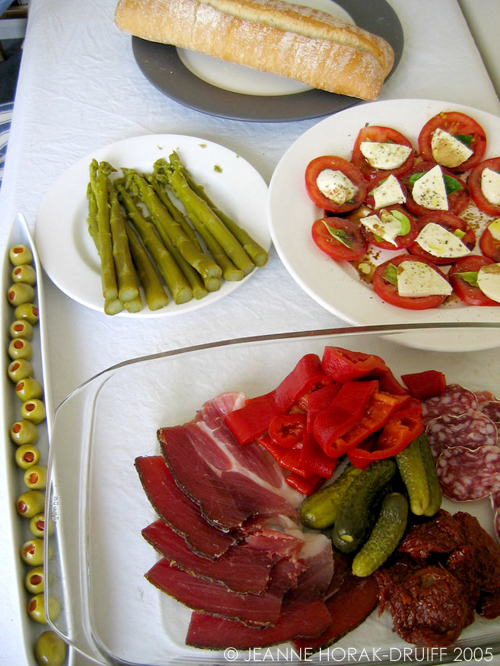 So what was on the menu??  Not in the picture above was the aforementioned potato salad with a spring onion and yoghurt dressing, but what you can see are:

The tastes together made for the happiest, happiest marriage and we sat in the sun in our lounge in lip-smacking pleasure for most of the afternoon.  For Nick it was a delicious meal and a nice, sunny afternoon.  For me it was all this as well, but more importantly it was a return, however brief, to a great childhood pleasure.