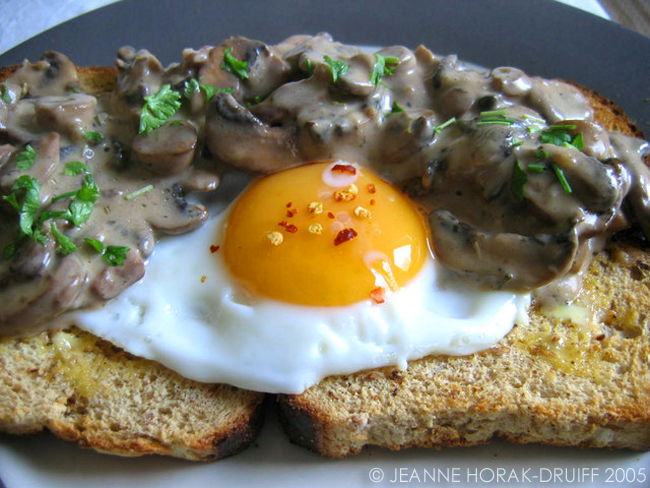 Well, folks, the most laid back food-blogging event on the Web is back.  We set no dates.  We set almost no parameters.  We do not judge. We do the roundup as and when time permits.  Yup, it’s the EoMEoTE#2!  This event was conceived as a joke when Anthony at Man That Cooks and I were trying to outdo each other in the “weird web food events” stakes and he then started the ball rolling with the EoMEoTE#1.  Participation was limited as Reid at Onokinegrindz ate his contribution before he had a chance to photograph it, but Cooksister participated with this rather indulgent scrambled egg, smoked salmon and spinach concoction.

Now, many tides have come and gone, the moon has waxed and waned, salaries have been paid in and spent, resolutions once new have now been broken, and the end of the month has come (and gone!) again.  So logically, that means it’s time for EoMEoTE#2!  Due to my excessive procrastination (and a lack of ingredients last weekend!), my contribution only saw the light of day this morning, so I missed Anthony’s original roundup of EoMEoTE#2.  But I’m hoping that if I ask really nicely and promise to host EoMEoTE#3, he might include me as a stop-the-presses, hold-the-front-page, last-minute kind of entry…

So what did I make?  Well, the original recipe that I found called for hard-boiled eggs to be sliced on toasted English muffins, but I made some strategic alterations and what you see above is a fried egg on wholewheat toast, surrounded by sherried mushrooms and sprinkled with chilli flakes (for the egg) and fresh parsley and chives (for the mushrooms).  And let me assure you it tastes as good as it looks – highly, highly recommended!  I’m enjoying these adventures the henhouse…  Bring on EoMEoTE#3!

Over medium heat, sauté the garlic and mushrooms in the olive oil until the mushrooms begin to soften and release moisture.

Stir in a Tbsp of flour (just enough to soak up the liquid in the pan) and stir well to prevent lumps. Add the sherry, stir again and then add the cream (vary the amount of cream depending on how saucy you want the mushrooms to be – less cream for demure mushrooms; more cream for saucier specimens).

Fry the eggs sunny-side up until just done, then place an egg on each slice of toast and top with the creamy mushrooms. Top with a sprinkling of chilli flakes (if using).

« Warm avocado and biltong soup
It’s not what you eat… »