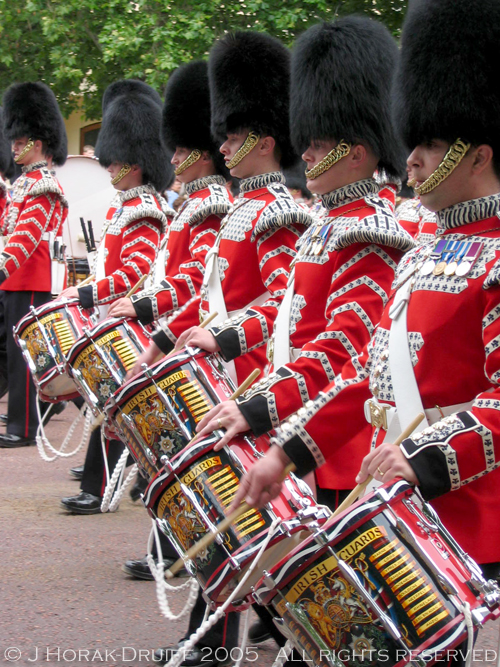 ** 2019 UPDATE ** The 2019 Trooping of the Colour ceremony in which Her Majesty the Queen participates will be taking place on Saturday 8 June 2019 (with two rehearsals on 25 May and 1 June).  Seated ticket prices for the stands around Horseguards Parade  are as follows:

If there is one thing the British do better than just about anyone it is pomp and ceremony. They have centuries of history to draw on for arcane protocol and quirky traditions, so when I get a chance to see them strutting their pomp & ceremony stuff, I’m there. Now I have been to see the Trooping of the Colour twice before, in 2000 and 2003, but both times I didn’t have a ticket and had to brave the crowds & jostle for a place along the processional route. End result = 30 out of 36 photos containing a blurry head of the tourist in front of me and a little corner of colour where the marching band is almost visible. Grrrr. Oh well, you can’t complain – at least it’s free and you can just show up on the day if you feel like it!

What’s the occasion? Well, it’s the official celebration of Queen Elizabeth’s birthday – even though her real date of birth is 21 April (see what I mean by quirky traditions?!?) and it consists of a military parade from Buckingham Palace, up The Mall to Horseguards Parade where there is a lot of marching and military bands, an inspection of the troops and a chance to glimpse members of the Royal Family. And in 2005 I managed to get tickets in the ballot.

The troops march from Buckingham Palace at about 10h00 towards Horseguards Parade and the Queen leaves the palace in her carriage at precisely 10h40, to arrive at the parade ground at 11h00. You can stand anywhere along The Mall and see the parade and the royals up close and personal.  Take a camera, arrive early,  and be prepared to defend your patch of turf from elbowing tourists and small children who play on your sympathy to squeeze in front of you. 😉  And when it’s all over, grab some food and picnic in the glorious St James’s park, check out the pelicans (yes, really!), and stroll down The Mall to see Buckingham Palace.

Saturday 5 June 2005 (the date of the final rehearsal, also known as the Colonel’s Review for which I had obtained tickets) dawned warm but cloudy – perfect, otherwise you fry in the stands surrounding the parade ground. Met a friend outside South Africa House in Trafalgar Square and trundled along to Horseguards Parade. Good thing I had checked the tickets that morning – there is a dress code if you have a seat on the parade ground: lounge suit, morning dress or military regalia for men. No mention of women, but I presumed a frock would be in order! We were seated by 10 and by 10h15 you could hear the first of the regimental marching bands approaching up the Mall. Some trooping trivia for you: the troops participating in the parade are drawn from a military organisation called the Household Division which is a part of the Army and therefore composed of fully trained, operational troops. So although they take part in ceremonial duties (including the changing of the guard daily at Buckingham Palace) and look harmless in their busby hats, they are in fact as deadly as any soldier in camouflage gear!

The Household division is made up of seven regiments as follows:

1. The Life Guards (a regiment who have been mounted at Horseguards since 1660 and provide the sovereign’s escort on all state occasions. They also perform the famous changing of the guard ceremony daily at Buckingham Palace)

and their impressive band, which evolved from the Trumpeters of the Life Guard who accompanied Charles II into London in 1660. Today the Band ride black horses and the Drummer by tradition rides a piebald or skewbald horse. The Drum horses are named after Classical Greek Heroes and carry solid silver Kettledrums, which weigh 80 lbs each and were presented by HM King William IV in May 1831

2. The Blues and Royals  (formed in 1969 from an amalgamation of The Royal Horse Guards, “The Blues”, and The Royal Dragoons, “The Royals”. The Royal Horse Guards trace their origins back to a force raised by Oliver Cromwell prior to the second invasion of Scotland. The Royal Dragoons trace their origins back to a troop of horse raised by King Charles II in 1661 to form part of the garrison at Tangier. Both have seen active service in both World Wars and modern conflicts such as the Falklands. Interestingly, these and many of the other regiments below fought against South Africa in the Anglo-Boer War of 1899-1902)

3. The Grenadier Guards (formed in 1656 by King Charles II who was then in exile in Bruges, Flanders. The regiment is named in honour of the defeat of Grenadiers of the French Imperial Guard at the battle of Waterloo in 1815 anf is the only regiment in the British Army that has directly gained its title from the part it played in action) and their band

4. The Coldstream Guards (which originated from part of the first English standing army called “the new model army” and assembled by Oliver Cromwell in 1650 to oppose Charles II’s threatened invasion from Scotland. By 1661 they had returned to London and served Charles II as his personal guard after his return to the throne)

5. The Scots Guards (regiment raised in March 1642 on the orders of King Charles I, who have been deployed recently in the Falklands and both Gulf Wars, as well as playing important roles in UN, NATO and national peacekeeping operations in Zimbabwe, Cambodia, Sierra Leone, Georgia, Kuwait, Bosnia and, most recently, Kosovo)

6. The Irish Guards (formed on the 1st April 1900 by HM Queen Victoria in recognition of the bravery of the many Irish regiments who fought in the South African campaigns)

7. The Welsh Guards (raised in 1915 by order of His Majesty King George V, in order to include Wales in the national complement of Regiments of Foot Guards identified with the countries of the United Kingdom. They have seen active duty in both World Wars as well as the Falklands conflict)

and their band, which was formed in 1915 and is now renowned the world over for its concerts and marching displays. In addition to the Concert Wind Band and the Marching Band, other ensembles include the Dance Band, the String Orchestra, Brass Ensembles, Wind Ensembles and Fanfare Teams.

Also participating are members of the King’s Troop Royal Horse Artillery – their official duties include the firing of Royal Salutes in Hyde Park on Royal Anniversaries and State Occasions, and providing a gun carriage and team of black horses for State and Military funerals – as well as gun carriages for the Trooping of the Colour ceremony.

You may also legitimately ask what is the “colour” being referred to. It is in fact the Queen’s Colour (flag or standard) of a Foot Guard battalion which is ‘trooped’ (carried along the ranks) each year before the Sovereign. Only one colour can be trooped at a time, and the five Regiments – Grenadier, Coldstream, Scots, Irish and Welsh – therefore take their turn year by year.

For the Ceremony, a staggering 1400 men and women from these various army regiments, plus hundreds of horses and the gun carriages march up the Mall from Buckingham Palace to converge on Horseguards Parade. On the final day of the Trooping, this parade includes the Queen and Prince Philip, Princes Charles, Andrew, Edward, Harry and William (depending who is around!) and often Princess Anne. It was at the 2000 trooping that I saw the Queen Mum for the first and only time in the flesh – the advantage of standing by the roadside is that you get a lot closer to the Royals than you do when seated in the stands!

So as I said, we heard the first strains of the regimental bands at about 10h15 and then they arrived on the parade ground one by one. I must admit that I find the mounted bands by far the most impressive – controlling a horse AND playing music harmoniously with other people – now that’s what I call multi-tasking. The horses are also a feast for the eyes as they are groomed to within an inch of their lives. I must admit though that being seated on the parade ground gave me a whole new respect for the foot regiments – the intricate marching that they have to do to march a column of men around a corner is marvellous to watch and the sheer volume of people on the parade ground is extremely impressive! In preparation for the trooping of the flag, all the regiments have to stand in straight lines and their commanding officers stand at the end of the line and call out each person’s number & whether he/she should step forwards, backwards or stand still – so you had 5 VERY LOUD soldiers yelling “One: forward! Two: still! Three: back!” etc etc. Very interesting. Once all the lines were straight Prince Philip the Duke of Edinburgh, who had arrived earlier in an open carriage, in his capacity as Colonel inspects all the soldiers on the parade ground. The following week, the Queen would have been fulfilling this duty and the little girls seated behind us were driving their parents totally insane with plaintive cries of “but when is the Queen coming?”… After inspection, all the regiments do a few more circuits of the ground, as does the Colour and by 12, they finally all marched back down the Mall and out of sight.

It was a really impressive display and gives you a real sense of history – the fact that everything in England is sooooo old still amazes me. It is well worth timing a summer visit to the UK to coincide with this ceremony as it is surely unique in the world in terms of grandeur (in a western European sort of way, that is!). Whether you stand by the roadside for free or make the effort to get tickets on the stand, it is a wonderful event and a great photo opportunity – if only you can shoot past that tourist’s head in front of you!