You are here: Home / Recipes / Gluten-free / Honey-roast chicken: how chicken is meant to taste 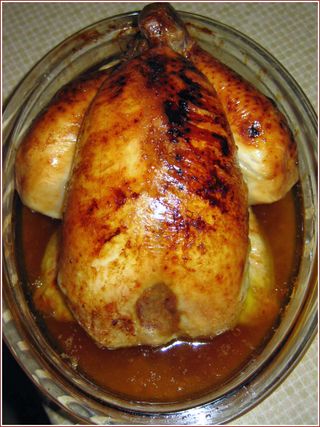 Don’t you love making a dish that makes you feel as if you are ten years old again? It has to be something that gets really down-and-dirty messy and involves you getting elbow-deep in ingredients, but preferably also something reasonably simple.

I remember spending loads of time as a child “helping” my mom cook and bake and fighting with my brother as to who should lick the mixer blades and bowl clean. Later, she bought me a kids’ cookbook -“My Learn to Cook Book” by Ursula Sedgwick (now sadly out of print but used ones are available on Amazon)  I remember making coconut ice and cookies and fudge and messing up myself and the kitchen to my heart’s content – and sometimes even producing something edible. My favourite part was greasing the baking tin/sheet as this involved butter from the fingertips to the armpits! A few years later, I progressed to making toffee apples – you could buy a kit containing a packet of lurid pink sugar and some sticks. Said sugar would have to be boiled up with water to the hard ball stage (copious testing in water and tasting of the results was involved!!) before the apples could be impaled on sticks and dipped in the syrup. There would be pink sticky trails all over the kitchen for weeks – my mother was clearly a very tolerant woman!! So my predominant memory of childhood cooking is mess, and any recipe involving messiness takes me back to my mom’s kitchen when I was not yet tall enough to reach some of the countertops. 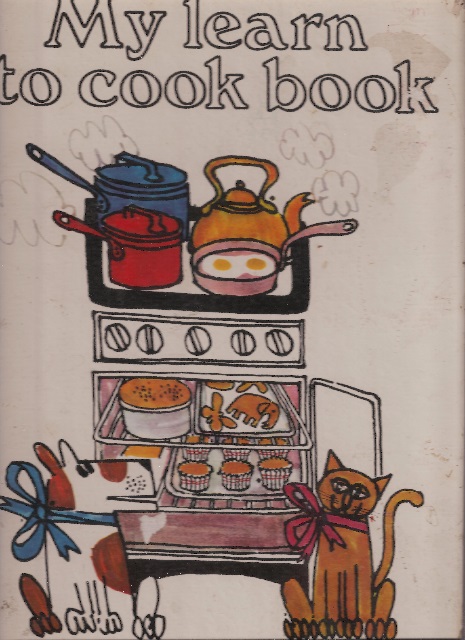 Which brings me to dinner. I have been feeling really virtuous this week – after an absence of about a year, I have set foot back in my gym. Not once but four times this week! I know this won’t last so I am trying to make the most of my initial momentum! This new-found enthusiasm for exercise does, however, make serious inroads into the amount of time I have available for cooking in the evenings. So on Wednesday night I decided to make something that I could stick in the oven before gym and come back to the finished product. The end result was something of an epiphany for me – roast chicken as the Good Lord intended it!

We used to eat roast chicken all the time at home – it was the standard Sunday lunch fare for as long as I can remember and it was always done in pretty much the same way – roasted in tin-foil until done and then seasoned and crisped uncovered for the last few minutes, with a chasseur sauce. Very tasty & the template on which I have modelled all my roast chickens ever since, but not particularly exciting. So on Wednesday I went through my recipe book (yes, I am one of those sad, anal retentive people who clip recipes from magazines & off the back of packaging, paste them into an indexed book… and sometimes MAKE them!) and found something that looked quick and easy to prepare and sounded delicious.

The recipe is from a long-forgotten magazine but still bears the chef’s name – Frank Swainston, who is a chef at Constantia Uitsig, one of the best-known restaurants in the Cape winelands (and well worth a visit, should you be going that way). The recipe is for roast chicken with honey (see below) and involves generously smearing softened butter all over a whole raw chicken, and then smearing honey all over the butter so that the bird is completely coated with this glaze. By the end of the preparation I was greasy, sticky and totally in my element. A quick trip to the gym & on my return I found the most perfect bird I could have hoped for. The skin was crisp but not blackened; the meat, succulent and easily separated from the bones. I found the flavours had not only developed beautifully but also complemented each other without losing their individual qualities. It is the perfect chicken! Make it. Soon!

Place the garlic, salt, pepper and tarragon in the cavity.

Place the chicken in an oven-proof dish and smear the softened butter generously all over it. Drizzle the honey over the chicken a teaspoon at a time and smear all over the butter. Make sure all exposed areas of the chicken skin are covered.

Check that the chicken is fully cooked and that the juices run clear before removing. There will be a lot of delicious cooking juices at the bottom of the dish – I thickened these slightly with cornstarch, but that’s a matter of personal taste. Carve and serve with the juices on brown rice with green vegetables and a salad.

« Chicken breasts in a tomato and chickpea sauce on vegetable couscous
Henley Wine Fair, May 2004 »