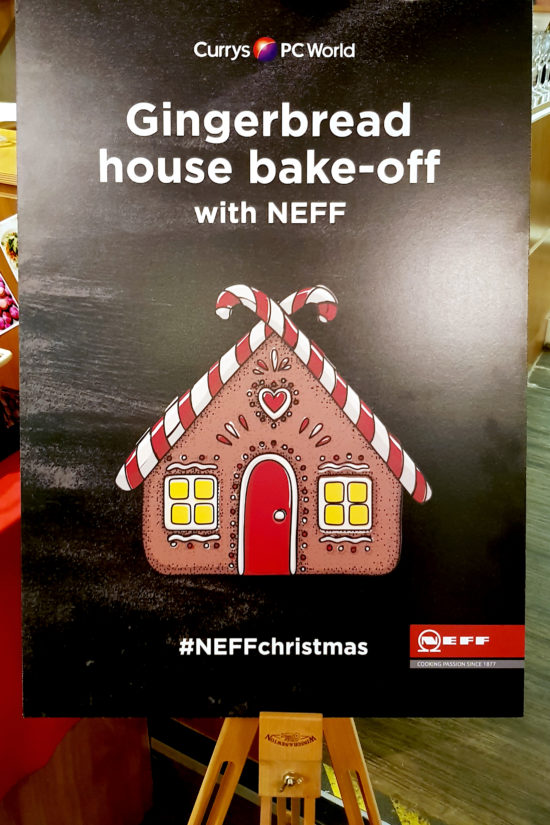 Confession: despite now having been foodblogging for nearly 15 years, I have never baked a gingerbread house – or even decorated a ready-made one from a kit. I know, right?  You’re thinking to yourselves “and she calls herself a food blogger… seriously?!” But the truth is I have always been more of a cook than a baker. And to be totally honest, I might not have paid much attention when the invitation to attend a gingerbread house bake-off landed in my inbox, but for the fact that one of the hosts was one of my favourite kitchen brands, Neff.

When I moved into my previous house, the kitchen was already renovated and kitted out with a Neff double oven and gas hob – it was my first experience of Neff products and it is fair to say I was smitten. Fast forward 9 years to my buying a new house this year, with distinctly non-premium kitchen appliances – and he first thing I did was replace the existing gas hob with a Neff gas hob. As is the way with house renovations, my aspirations exceeded my budget and I had to draw the line at replacing the basic but functional oven… but even before I moved in I already knew what I eventually want to replace it with a NEFF Slide & Hide® oven. So when I heard that these would be on show at the  gingerbread house bake-off with Curry’s PC World, wild horses could not keep me away.

The evening took place at L’atelier des Chefs in Foster Lane and kicked off with mulled wine, Champagne and cheese before a short demo of the ovens. NEFF Slide & Hide® ovens are the only ovens currently on the market featuring a door that fully opens and then magically slides away under the oven, ensuring easier accessibility to the oven cavity (and more proximity to the food you are cooking) and most importantly for people like me with, shall we say, bijoux kitchens – it provides more space in the kitchen.  It’s also an important safety feature for those with small children and inquisitive pets – no accidentally putting a hand or a paw on the interior surface of a hot oven door.  But apart from this nifty feature, the ovens also feature a range of other options, including pyrolytic self-cleaning (a cleaning cycle where the oven burns away fatty deposits at the touch of a button and requires only a wipe from you – because I LOVE scrubbing my oven, said nobody, ever!); VarioSteam® which adds three different levels of steam intensity to ensure perfect results from roasting, baking or warming up dishes; and CircoTherm®, a unique hot air system for even heat distribution and simultaneous baking and roasting on up to 3 levels without the flavours of the dishes mingling. 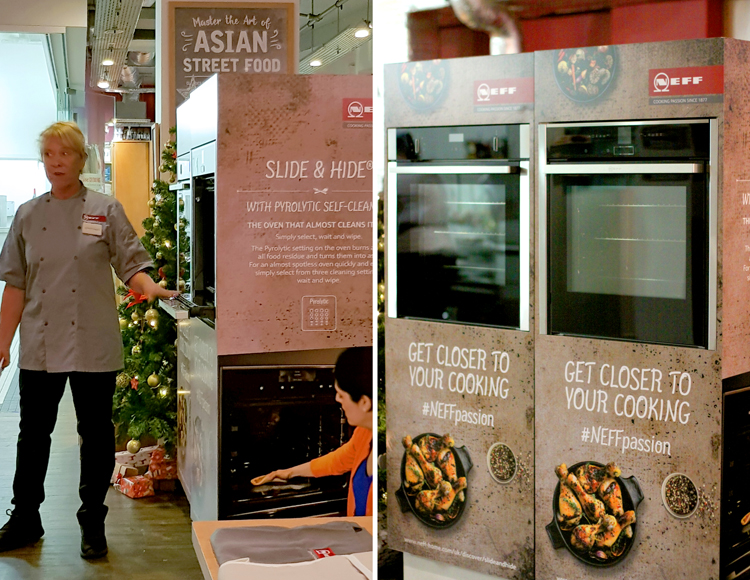 After learning about the ovens,we got down to the serious business of competitive gingerbread house baking! We were divided into 3 teams and given instructions and tips on the finer points of gingerbread house baking, including not overbaking the dough (a simple mix of ground ginger, golden syrup, soft brown sugar, butter, flour and bicarbonate of soda); and trimming it into shape while the dough is still warm and malleable because when it cools it is ROCK HARD! These sage pieces of advice in hand, half our team set about cutting out the template shapes for the walls and roof of the house, while the other half made bruschetta for us to enjoy after the competition with a glass of wine. A mere 15 minutes later our gingerbread walls and roof slabs were baked and ready to come out of the oven (setting the NEFF oven’s timer for this was a lifesaver!) and ready to have their windows and doors cut out before the dough hardened. While this was carrying on, the brilliantly funny and sweary Dani and I set about making the royal icing that would hold the structure together ultimately. Again, this is really simple – egg whites, icing sugar and lemon juice (and food colouring so  you can get creative!) .  My only advice would be to make sure that the egg whites really do whip into stiff peaks because otherwise your house will not hold together – it’s like having watery cement. With the gingerbread slabs nows hard enough, our team could start the delicate task of assembling the house.  Lesson learnt? THIS IS HARDER THAN IT LOOKS!! The secret is many hands to steady walls; and icing that is robust enough to act as glue.  And nerves of steel, obviously! The most nerve-wracking part was definitely putting on the roof! It’s all fine and well to put up walls.. but the roof requires those walls to be load-bearing!  It was all hands on deck for our team, holding the walls together while everybody held their breath and the first roof slab was put in place. There were a couple of false starts when the roof quickly had to be removed as the walls started sliding outwards… but with enough patience and enough icing, eventually it seemed to be staying up. 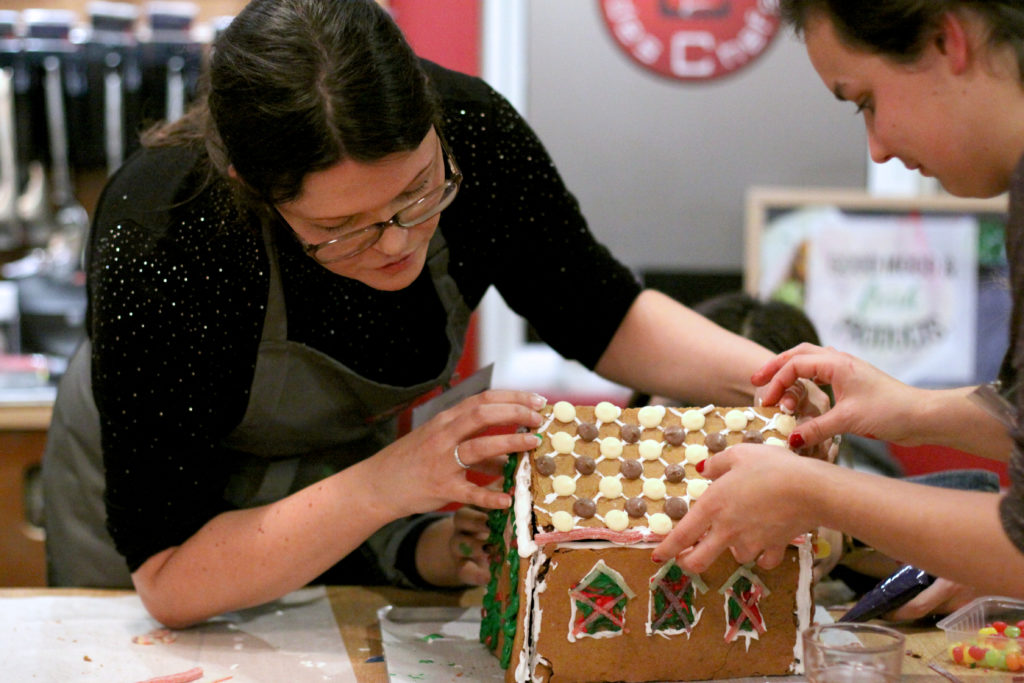 I think everyone agreed that the most fun part was decorating the house! Dani and I had whipped up some funky red and green icing colours and the team piped these onto the house to make a rambling rose and windows and add decorative elements to the roof.  Chocolate buttons became roof shingles; strips of multi-coloured chewy candy became curtains and a stained glass window; and best of all, it turned out that our team mate Rebecca (Runaway Kiwi) has the hidden talent of being able to make succulents out of jelly beans with her bare hands. FACT! Oh OK, her bare hands and a large sharp knife. But still… anatomically correct jelly bean succulents! And a chequerboard patio!! 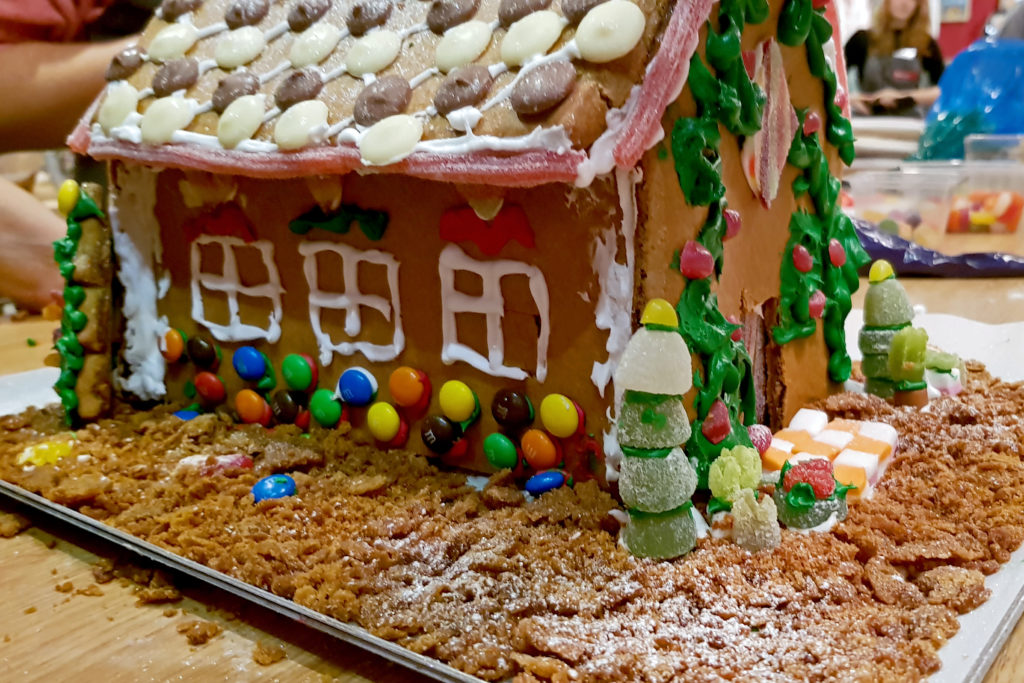 And then came the moment of truth… carrying the house to the judging table.  We had already heard the shrieks from another team as their house collapsed under the weight of the roof so carrying the house was pretty stressful… and once it was on the judging table, the roof started caving and sliding ever so slightly.  But we checked out the competition… all whispered a prayer to the Gingerbread Saints… and finally, our team was crowned the winners! Hurrah! Well done Team Gingerbread! 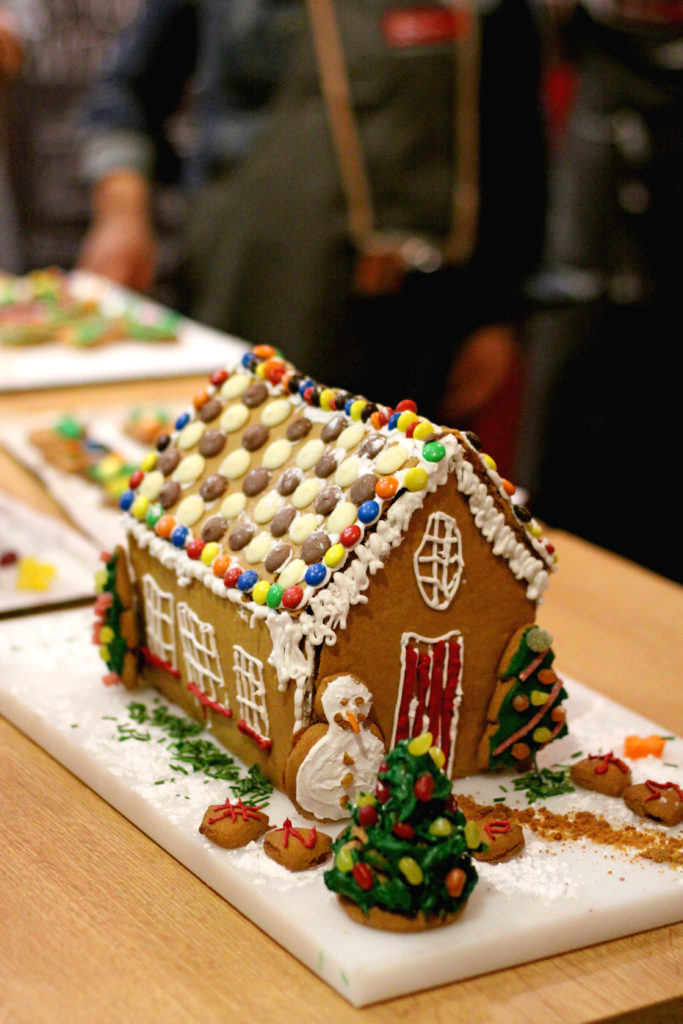 DISCLOSURE:  I attended this event as a guest of Curry’s PC World and Neff but received no further remuneration to write this post.  I was not expected to write a positive review – all views are my own and I retain full editorial control.