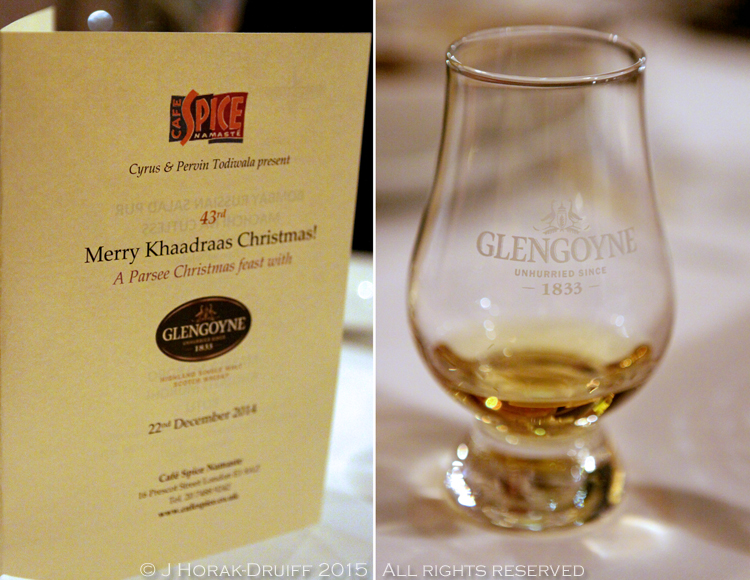 Ask a Londoner if they know much about Indian cuisine and I can almost guarantee that they will answer with a resounding “oh yes!”.  This knowledge will probably be based almost entirely on a few late-night tipsy excursions to Brick Lane for a vindaloo and some poppadoms; or a stroll down the Tesco ready meal curry aisle for a microwave chicken tikka masala lubricated with some Cobra beer. Of course, as every schoolboy knows, much of the restaurant trade in Brick Lane is in fact Bangladeshi rather than Indian, and chicken tikka masala is in fact a homegrown English invention. So on the whole, what people think they know about Indian food in the UK is at best woefully inadequate and at worst, factually incorrect.  The truth is that India is a vast polyglot melting pot of cultures and cuisines, varying massively from east to west and north to south and that there can really be no such thing as “typical” Indian cuisine. At most we can hope to become familiar with the cuisine of a particular area or ethnic group.

One such particular cuisine is Parsee cuisine. The Parsee are Zoroastrians originally from Persia (modern Iran), but who fled to India between the 8th and 10th century to escape religious persecution by Muslim invaders who were in the process of conquering Persia. The refugees settled mainly in the state of Gujarat in northwestern India where they maintained a strong religious, cultural and culinary identity.   And there is probably nobody better or more entertaining in London to introduce Parsee food than the irrepressible chef and restauranteur Cyrus Todiwala.  Born into a Parsee family in Mumbai, Cyrus trained at the Taj hotels in India, becoming the group executive chef before moving to London with his family in 1991.  In 1995 he opened his first restaurant, Café Spice Namaste, followed subsequently by Mr Todiwala’s Kitchen, The Park Cafe in Victoria Park, and Assado.  He has also cooked for the Queen, run cooking classes, and appeared numerous times on television – and when you meet him in person it is obvious that his passion for food in general and Parsee cuisine in particular are second only to his passion for storytelling.

We discovered this at one of his regular Khaadraas Club dinners held every 4-5 weeks at Café Spice Namaste, described by some as London’s “worst-kept secret” supperclub 😉 The dinners are convival affairs with large shared tables and a menu featuring heirloom recipes from his mother and aunts in Bombay and India – a perfect setting for Cyrus to expand our knowledge of Parsee cooking as he works the room, greeting everyone like  long-lost friend. Cyrus explained that Parsee cuisine is an interesting mix of Persian roots with many nods to their Gujarati hosts.  Whereas Persian cuisine is generally rather meat-heavy, Gujarati cuisine is predominantly vegetarian, so Cyrus amusingly explained that meat dishes would often be cooked under a blanket of rice and lentils so as not to alarm Gujarati neighbours visiting Parsee kitchens.  The use of sweetness and fruit in savoury recipes is another element of Persian cooking that has survived in Parsi cuisine. 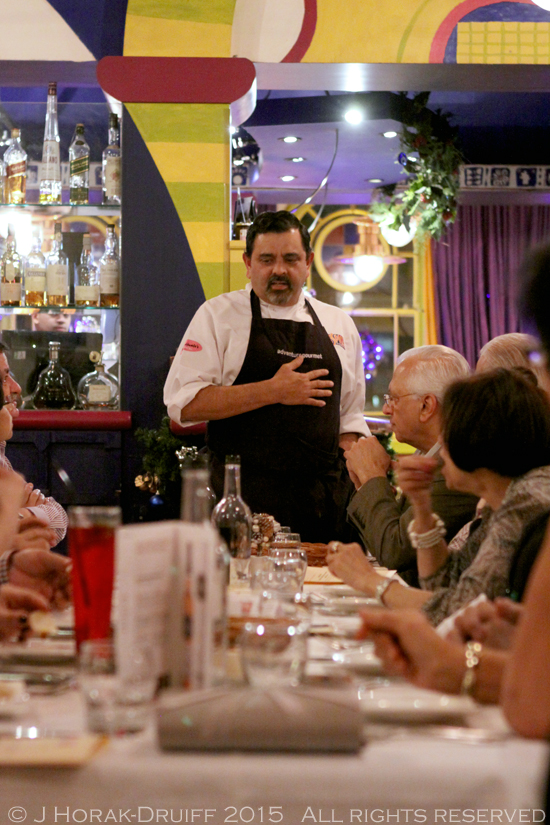 The dinner that we attended was officially designated as the 43rd Khaadraas club dinner and it was held in association with Glengoyne malt whiskies who had paired a whisky with each course. Our first course was a machchi na cutlets, a Parsee-style fish croquette served on a bed of Bombay-style Russian salad, paired with a 10-year old Glengoyne whisky. The cutlets themselves were deliciously crispy on the outside yet moist on the outside with the fresh flavour of spices and limes complementing the flavour of the fish. The whisky was smooth with caramelly, nutty notes.  It also matched surprisingly well with the food and was not overpowered by the spice. Our second course was peesala masala no poro, nhujaeli murgh and rotli.  This Parsee favourite consists of chargrilled chicken and masala egg omelette, served rolled into a soft flatbread and served with chutney.  This perfect street food was perfectly matched with a glass of 15-year old Glengoyne whisky – even smoother than the 10 year old and rich with the flavours of caramel and coconut. 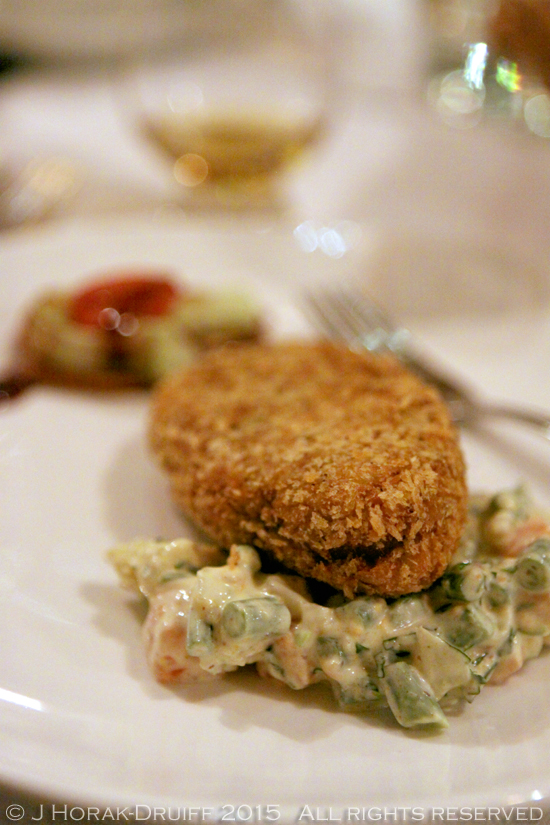 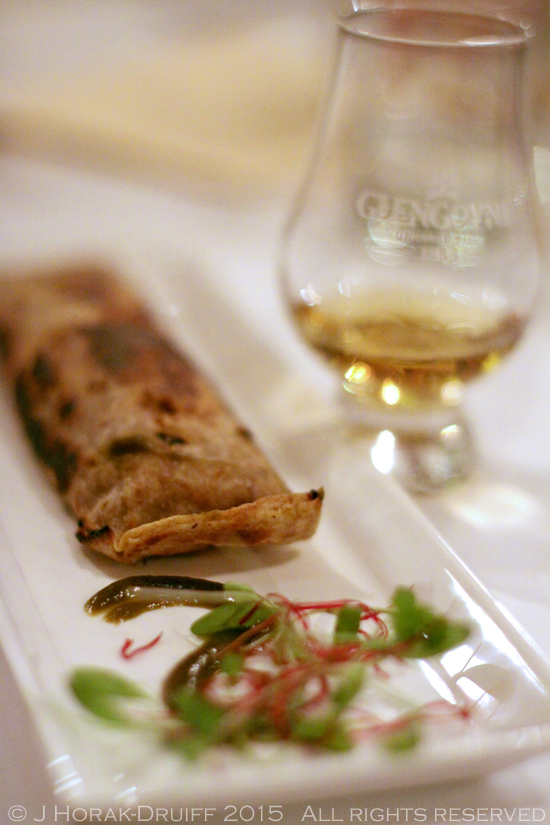 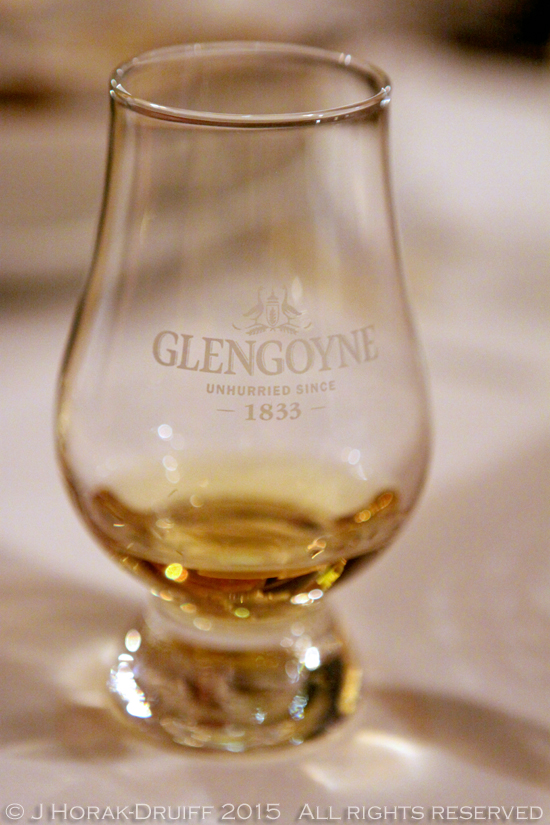 The third course consisted of kharu gos, taraela masala na papaeta and baeri palav.  This long list of things translated into beautifully tender stewed lamb flavoured with cassia bark, finished with tomato and fresh coriander leaf.  On the side were chunks of spiced fried potato and an unusual barberry pulao rice, with the whole dish being an example of a typically Parsee combination of sweet and savoury foods.  This was paired with a glass of Glengoyne 18-year old whisky. This had more complex, sherry-like flavours than the previous two with floral and even French cheese notes – but still with an astonishingly smooth finish.  The best match of the night, in my opinion.  For dessert, we had bhujaelu paav nu (an Irani-style baked bread pudding) and a wonderful almond kulfi.  These were served with a glass of silky smooth 21-year old Glengoyne whisky which was delicious on its own, but I thought it was possibly too rich for the puddings. 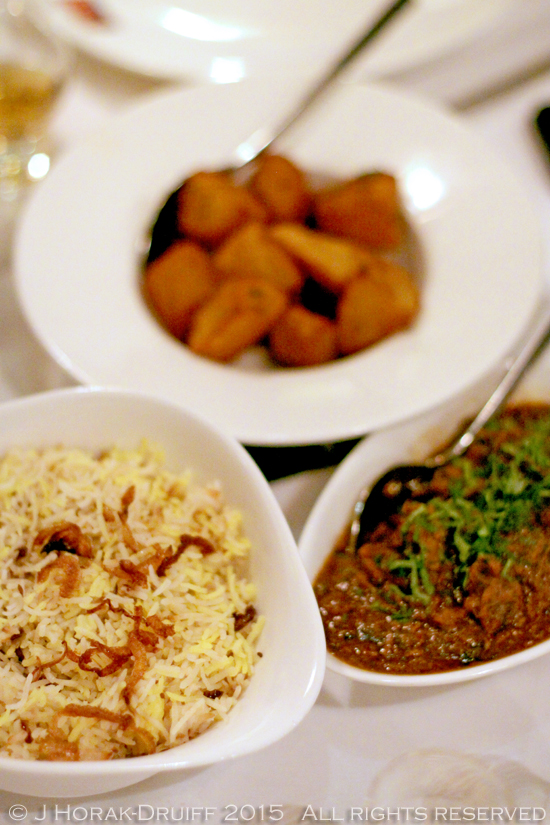 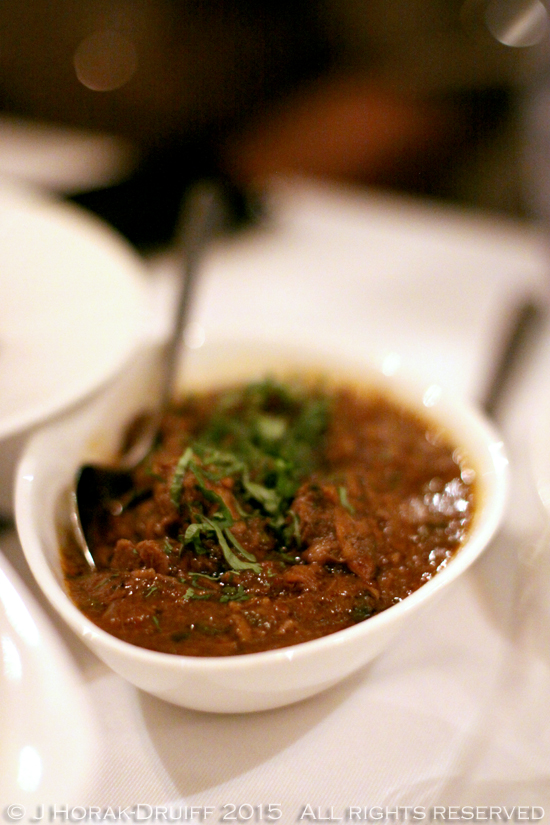 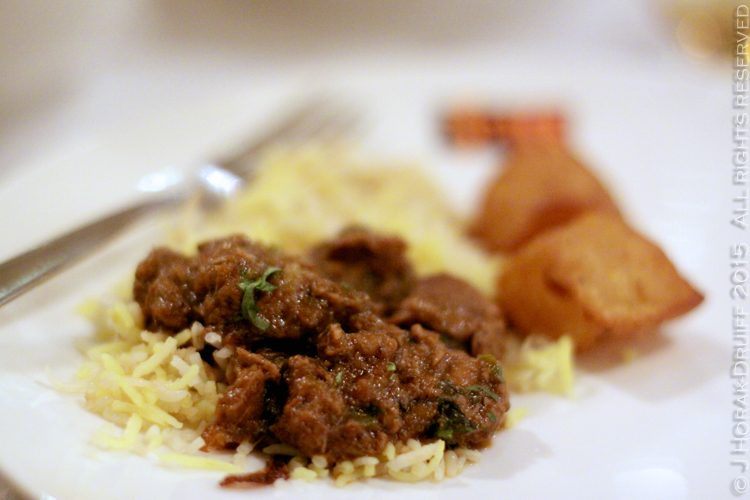 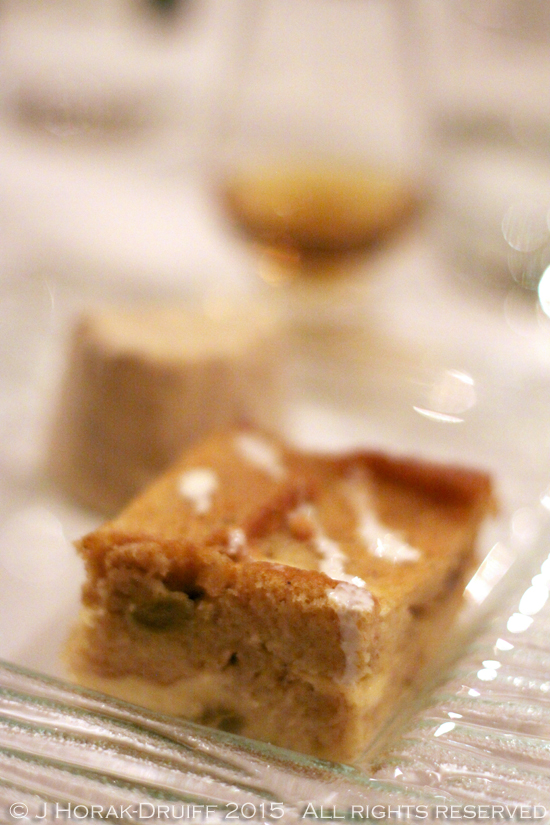 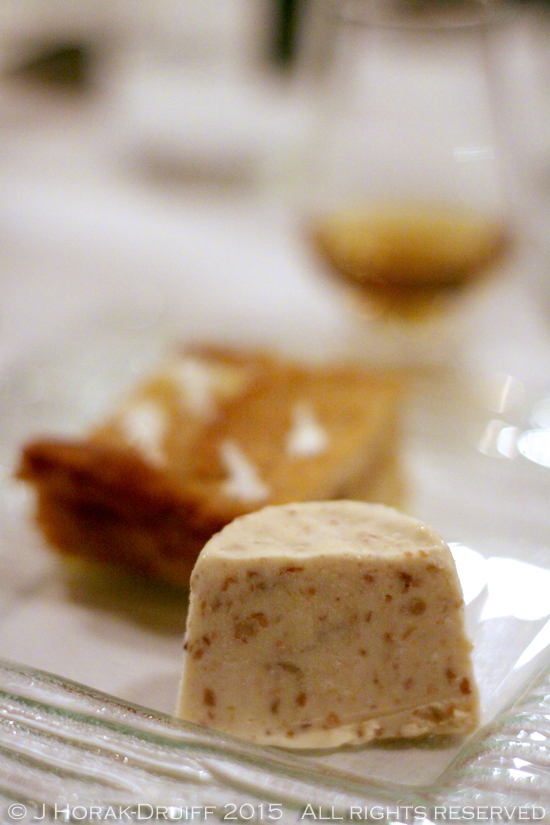 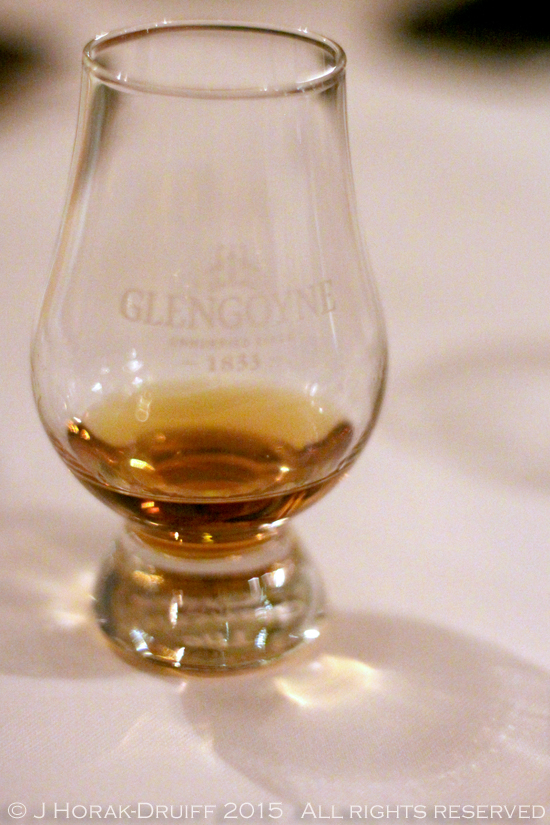 Not only was the food delicious, but Cyrus’s warmth, humour and obvious love for his food and culture made the evening truly memorable.  Its easy to see why his Khaadraas club dinners are such a poorly-kept secret – once you have experienced one, it is hard not to want to sing his praises and become a regular, as many of our tablemates seemed to be.  If you are keen to check out a Khaadraas club dinner for yourself, the next one is coming up on 9th November – details here.  Alternatively, you can sample Cyrus’s delicious food at Taste of London Festive edition.  Remember Taste of London that I told you about in the summer?  Well, their festive-themed winter event is taking place at Tobacco Dock in East London from 19-22 November 2015.  As with the summer event, it’s a great opportunity to try food from a number of well-known chefs and restaurants all in one place.  Chefs and restaurants exhibiting at Taste Festive this  year include The Hand & Flowers’ Tom Kerridge; L’Anima’s Francesco Mazzei; Smokehouse’s Neil Rankin and Café Spice Namaste’s Cyrus Todiwala.

Khaadraas club dinners take place every 4-5 weeks at Café Spice Namaste.  Prices vary according to the menu and number of courses – the one above cost £45 per person for four courses plus whisky; but the November event is only £35 for 3 courses.