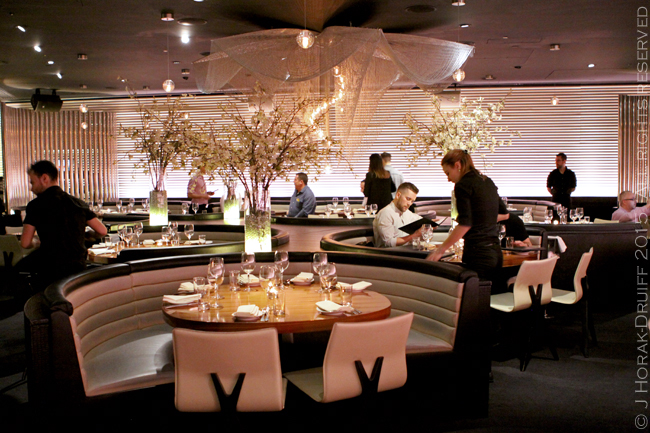 Service Question: how many times can you walk past a London venue without actually realising it is there?  Answer: more times than you think!  I have walked up Aldwych and The Strand on numerous occasions but it was only when I was actually headed for dinner at STK that I realised where it was (across the road from One Aldwych). The restaurant is a London outpost of an American chain and describes itself as a blend of modern steakhouse and a chic lounge, with emphasis on “the social experience” and a “vibe-driven approach to fine dining”. Every STK restaurant has a DJ and I am told that at weekends, evenings end with diners dancing on the tables.

On the Tuesday night when we arrived, though, things were (thankfully!) relatively calmer. The room is surprisingly large and comprises a bar and a dining area. The decor is straight out of my 1980s fantasy of what it would be like to live in a big city: lots of black; cream leather banquettes; lots of shiny, twinkly things; and smoky mirrors for keeping an eye on your fellow diners. It’s so Miami Vice, I rather expected Don Johnson complete with wrinkled linen suit and sockless loafers to step out from behind a smoky mirrored pillar. Two-seater tables are arranged around the perimeter of the room but are too close together – getting up involved rather too much proximity between my derriere and my neighbouring diners’ meals! But once seated, I had a great view of the larger tables in the centre of the room – and I had already figured out that people watching is one of the main pleasures of STK.

The menu is divided into starters (£9.50-£12.00), salads (£8.00-£9.50), a raw bar, grills (£16.50-£65.00), mains (£14.50-£22.50) and desserts (about £7.00)  but the main attraction here is definitely the USDA meat. STK offers small, medium and large cuts of meat, from a small featherblade steak to a gigantic 750g “cowboy steak” – definitely something for every taste and budget. But as we were on a Bookatable Star Deal, we focused on the limited menu included in the deal (a choice of three starters, mains and desserts) while enjoying the included cocktail. The signature STK Martini (Ketel One vodka, grapefruit, blood orange, passion fruit, and orange bitters – £12.00) was included in the deal and was really good – not only pretty as a picture but full of fresh citrus flavours and not too sweet. The accompanying generous serving of warm bread and pesto dip was also excellent, tending towards a brioche texture and topped with a slick of STK’s blue cheese butter for an added umami kick. 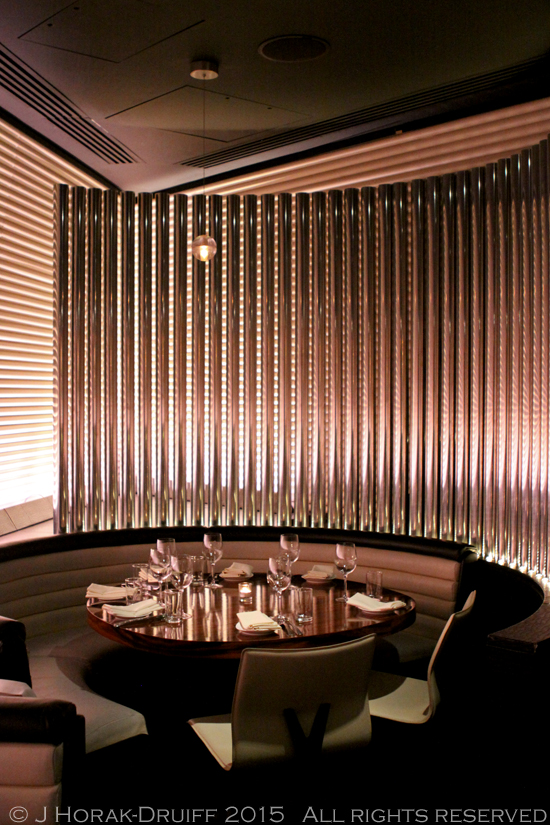 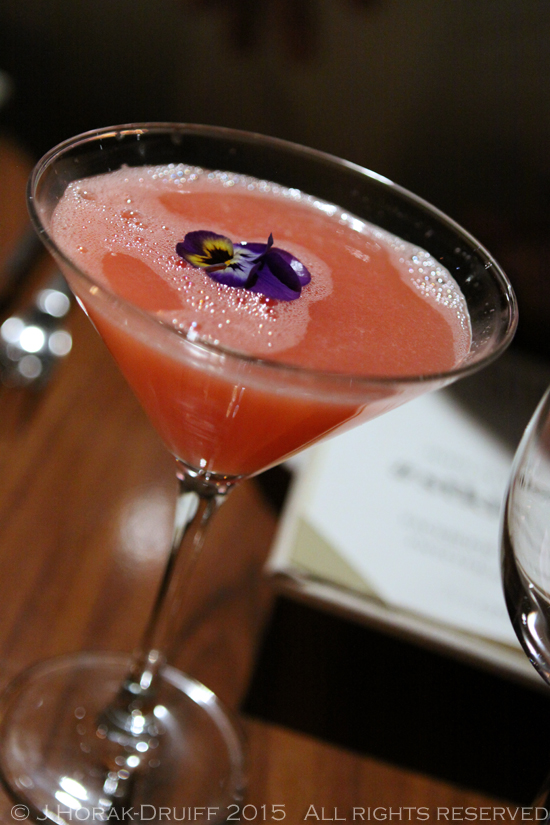 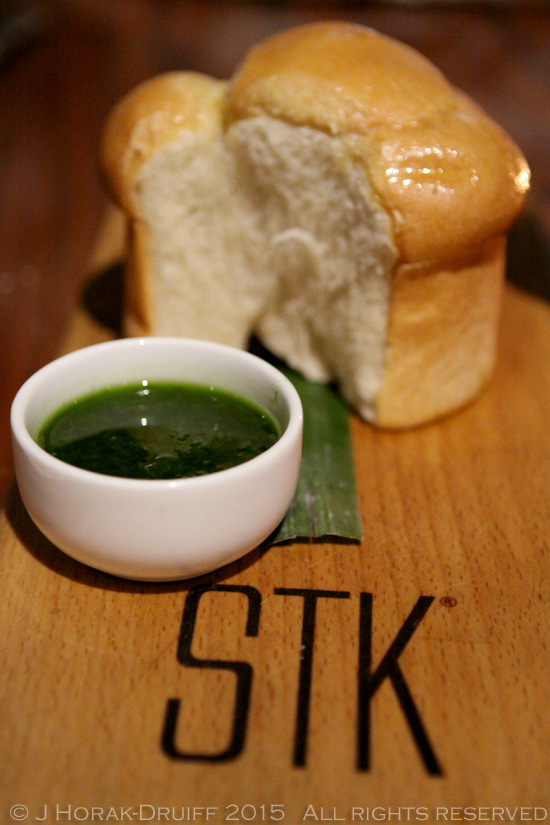 This was followed by hands-down my favourite dish of the night (lack of vowels aside!): Lil’ BRGs – mini Wagyu beef sliders which were quite possibly the best thing I’ve eaten in an age. Brioche-like mini sesame buns with gently crisp exteriors and pillowy interiors; fat, juicy burger patties; and a whiff of truffle in their “special sauce” – a perfectly decadent mouthful (usually on the menu for £11.50 for 3).  Nick had tuna sashimi with honey, sesame and toasted ciabatta (£9.75) – four medallions of gorgeous fresh tuna that contrasted nicely with the Asian-inspired accompaniments. 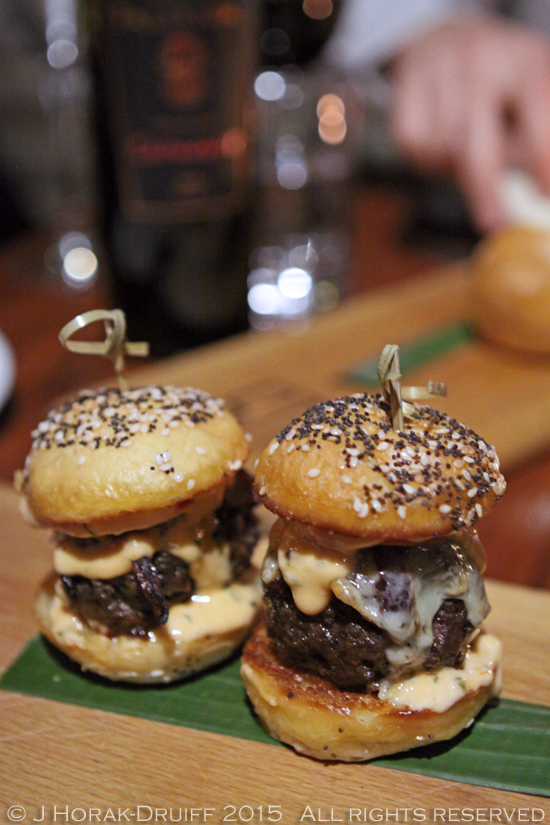 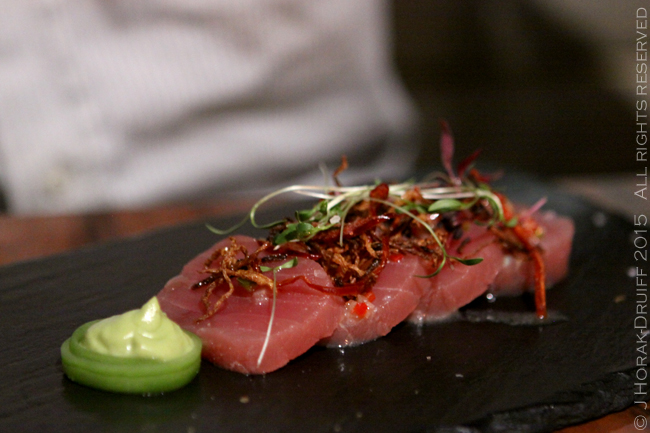 Although not included in our deal, we also ordered a bottle of wine to go with our mail course.  The wine list is surprisingly good, with many premium USA wines that you seldom see on London menus.  All I would say is that there is not much available below £40 per bottle – but we were very happy with our ripe and juicy Chilean Falernia Carmenere Riserva 2012 for £41.  For our main course we both chose the 150g feather steak topped with a grilled prawn (£16.50) – toppings are a big thing on the menu and all steak can be topped with a variety of optional extras including truffles, foie gras or half a lobster.  Featherblade is not a cut either of us would have chosen normally – it’s too thin to get properly medium rare and although ours was not overdone we did look on in envy as our neighbours cut into their pink rumps and sirloins. The steak itself was underwhelming – adequate but not exciting and even on a reduced price menu, I thought the plate looked depressingly bare – even a slice of tomato would have improved it. The sauce (unnamed but presumably their house steak sauce) was a sweetish BBQ sauce affair and tasted a partir de la bouteille.  Sides were not included in the deal but we ordered the Parmesan truffle chips  (£4.00) and the mustard mashed potato (£4.00). The mustard mash was creamy and well-flavoured (and served in a rather desirable little Staub cast-iron pot).  The thick-cut chips came in full-on 90s gastropub format, Jenga-style, with a little heap of rather dry grated Parmesan on top and a slick of truffle oil somewhere below.  The chips themselves were nice, if not stellar, but I was not a fan of the sawdust-y Parmesan. 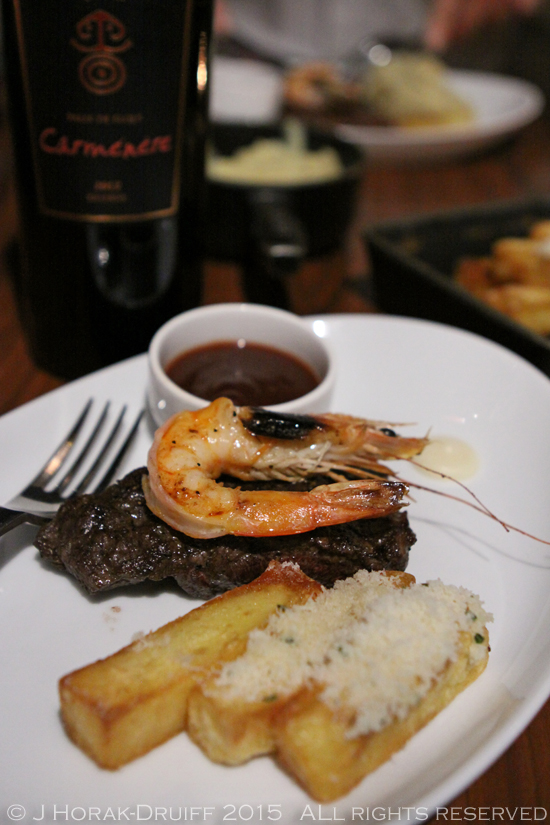 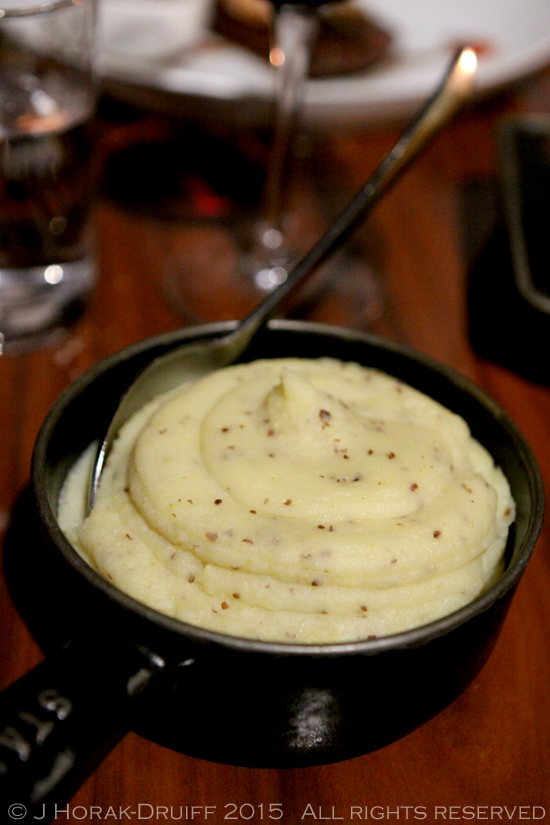 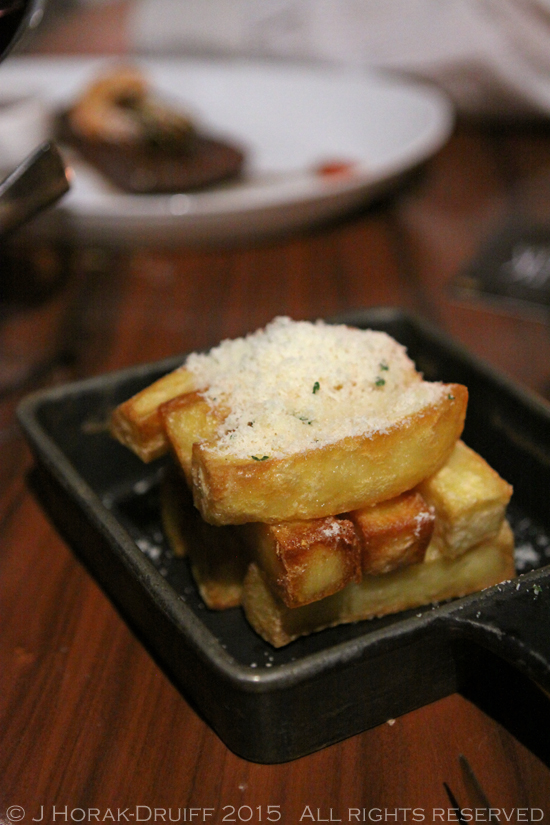 Things picked up again with dessert though.  Nick opted for the Lego lemon meringue pie with vanilla sablee Breton, lemon curd with yoghurt crispies,  yoghurt cremeux, lemon sherbet and meringue sticks  (£7.50) and I had STK Snickers – a milk chocolate and peanut ganache bar with a salted peanut mousse, salted whipping caramel, dark chocolate brownie chunks and peanut brittle (£7.00).  We both loved the playful plating of the cheesecake and the Lego form, but Nick also approved of its general tartness and the nice balance of flavours and textures of all the elements.  If you love Snickers bars (and I do!), you will adore this dessert, which takes the basic elements of a Snickers bar (chocolate, caramel, nuts) and dresses them up in new textures and shapes. I was particularly taken with the salted peanut mousse… Heaven.   Somebody in the sweet kitchen certainly knows what they are doing! 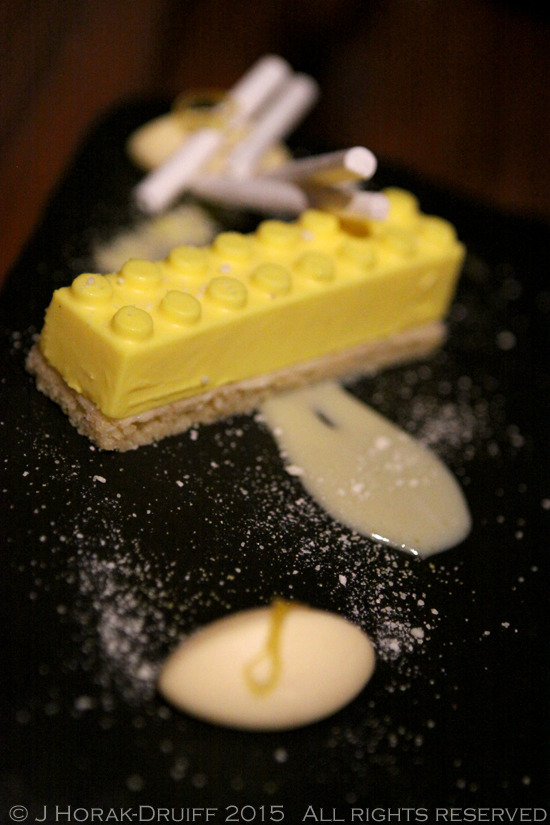 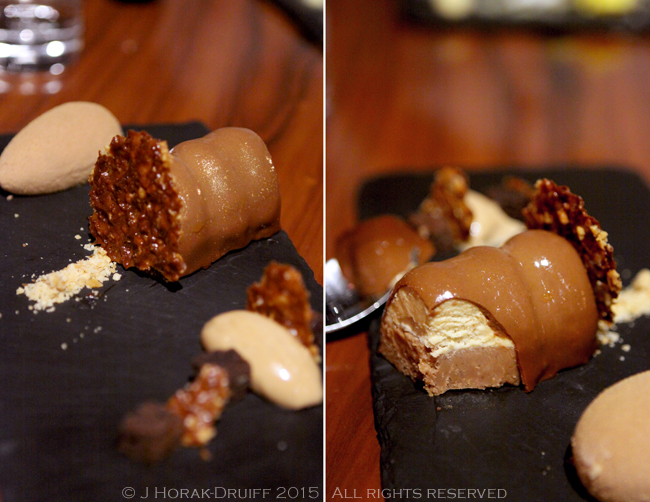 Service (including the reception staff) was full of American-style cheer and helpfulness, and prompt without making us feel rushed. Throughout our meal, the promised vibe-inducing DJ was in his booth and the music initially comprised a Romy & Michelle-style  80s cheeesefest (Belinda Carlisle! Wham!) of note, but after about 9 the tunes became more current as the volume went up and the lights went down.  While finishing our bottle of wine, we also had some time to observe  fellow-diners. And what a smorgasbord they were! The clientele seemed to be divided roughly into two groups: City suits entertaining out-of-town colleagues; and groups of Essex youngsters in town for the night and determined to have a good time – an eclectic but not altogether badly matched mix in terms of aspirations for the night.

All in all, we had a surprisingly enjoyable evening.  I say surprising because on paper, STK does not sound like my kind of place at all: the entire concept of a DJ while I eat is something that has not appealed to me since about 1992; I get annoyed gimmicky spellings like STK and BRGs; and the décor made me fear that it was intended to distract from mediocre food.  But the food (with the exception of the lacklustre featherblade steak, which I would not ordinarily have ordered) was really enjoyable, with moments of brilliance like the bread, the Wagyu sliders and the Snickers dessert.  I also thought that at  £35 per person for three courses plus a cocktail, the Bookatable Star Deal provided good value for money – ordering the same items off the menu would have cost at least £48 per head. (A prix fixe pre-theatre menu is also available.)  And who knew that dining to the sounds of Belinda Carlisle could be so nostalgically pleasing, in a strange sort of way. Would I go again?  Possibly not for a romantic dinner a deux, but with a group of friends who were up for partying like it’s 1999 after a steak dinner, I could definitely be persuaded.

DISCLOSURE: I enjoyed this meal as a guest of Bookatable but received no further remuneration and was not required to write a positive review.  All opinions are my own and I retained full editorial control