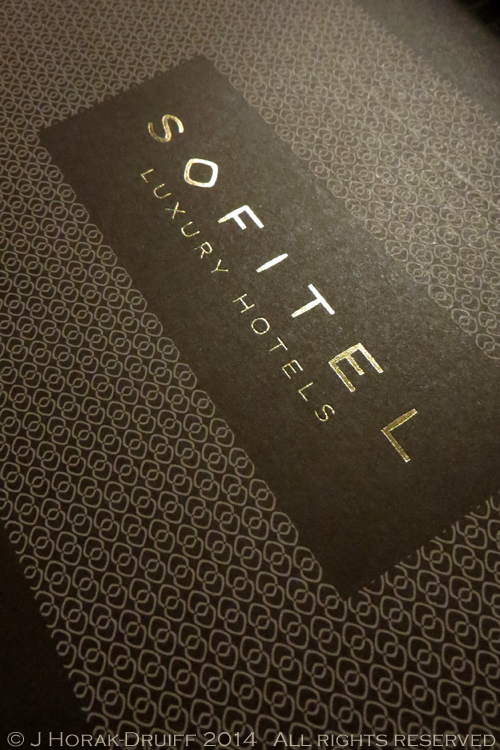 A couple of winters ago, Nick and I set off on our annual ski trip.   As usual, to maximise ski time and minimise cost, we were flying out of  Gatwick airport at some ungodly hour, requiring the alarm to be set for well before dawn.  Bags packed, passports checked, house locked and ice scraped off the car, we set off.  It was cold but not snowing and we made good progress until approximately the point where we turned off the M25 and onto the M23 south.  The first thing we saw was a car at an odd angle on the verge off the hard shoulder; then a few hundred metres on another. But the penny finally dropped when we saw a car up an embankment  off the side of the road, facing the wrong way into the oncoming traffic: they were all sliding on black ice.  As Nick slowed down, we also had a little slide, but thankfully at low speed and not as far as the edge of the tarmac, but it was a pretty hairy final few kilometres to the airport and it made me decide that I wasn’t doing any more pre-dawn winter car trips to Gatwick if I could help it!

Search the internet for hotels at London Gatwick and quite a few come up – but look closely at the results – most of them are in nearby villages or beyond the airport’s perimeter fence, requiring a very early morning wake-up call and a bus transfer to the airport terminal. However, the Sofitel London Gatwick is the only hotel that is so close to the North Terminal as to be directly connected to the terminal building via a covered elevated walkway.  If you slept any closer to check-in, you’d be sleeping in the departures lounge. So when it came to choosing a hotel to stay at before our early morning flight in December, there wasn’t really any debate necessary.

The hotel is built around a central atrium and looks far more plush than you’d imagine an airport hotel to look.  We brought our bags to the hotel in our car and checked in before dropping the car off at the long stay parking lot – they were fine about our leaving the car in the loading zone by the front door to check in, and it saved us having to drag our bags on and off the parking shuttle bus. The check-in process was quick and staff were extremely helpful and friendly, and soon we were in one of the glass-fronted lifts facing into the atrium, on our way up to our room. 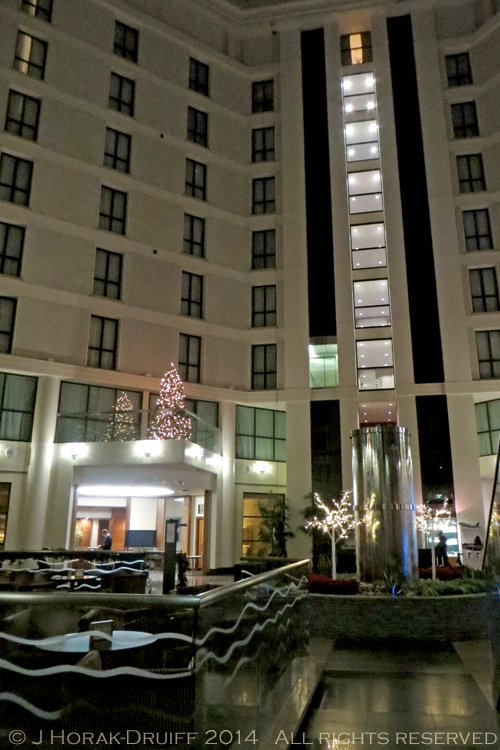 We had been upgraded to a superior room which is identical in size (23 square metres) to a standard room, but comes with a couple of extra bells and whistles:  there is complimentary and uncapped free wi-fi in the room as well as complimentary still and sparkling water and chocolates; there is a 50% discount on pay-per-view movies; and a 10% discount on all food and beverages.  As standard in all rooms, there is air-conditioning, a desk, a data port, tea & coffee making facilities, a flatscreen TV, an iron, and of course the famous Sofitel MyBed concept bed with fine cotton percale linen – as comfortable a bed as you can hope to find anywhere. In the bathroom there is an over-bath shower, a hairdryer and White Company toiletries as well as cotton wool pads and buds.  We also had an outwards-facing room from which you could clearly see the airport but they have also apparently invested in excellent soundproofing as we were not aware of any noise.  If you are worried about this, you can also request an atrium-facing room. 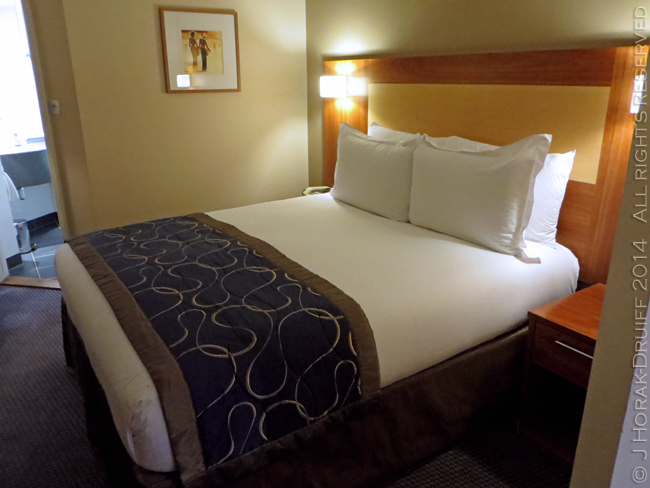 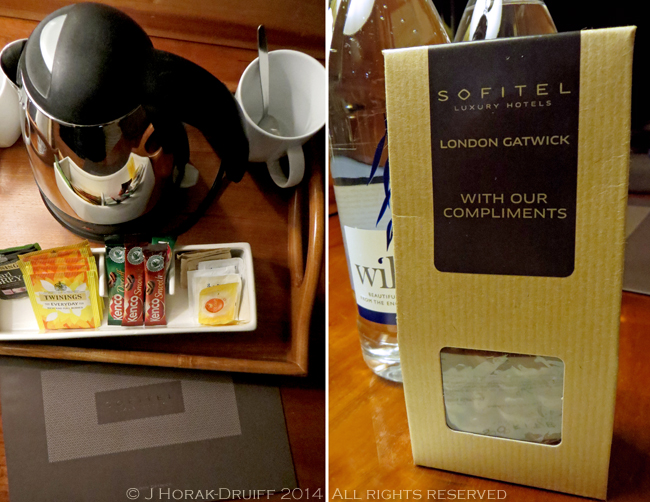 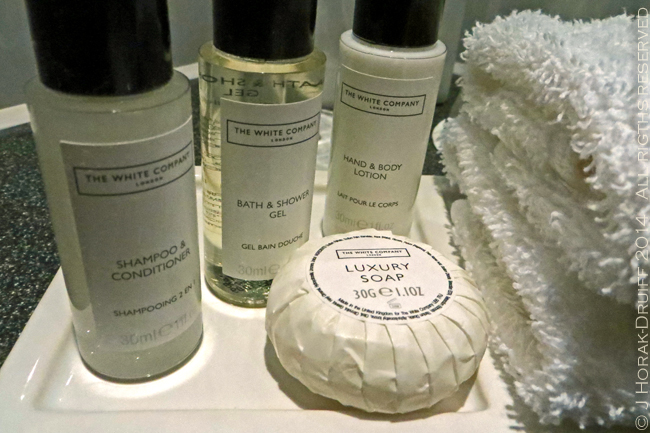 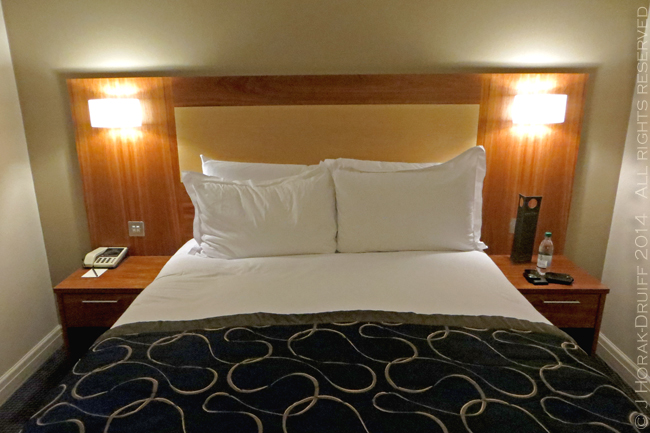 The hotel has two bars to choose from (the Kua Bar on a balcony overlooking the atrium; and La Terasse in the atrium itself) as well as three on-site restaurants, namely Gatwick Oriental (Asian); La Brasserie (modern European) ; and the less formal  Urban Café in the lobby, which is where we chose to dine.  It’s a buzzy space offering all-day dining situated in the lobby atrium, which makes it a great place for watching the world go by but perhaps not the best place for a romantic diner a deux.  The menu includes all the usual suspects like burgers, wraps and salads, but also a selection of pizzas; and there is a perfectly adequate if not overly exciting wine list with options by the glass. I had a glass of prosecco and a mushroom, caramelised onion and fresh rocket pizza while Nick had a spicy pizza, and we shared a  Greek salad.  The salad was very large and delicious – nothing fancy but fresh plenty of olives and feta (the two ingredients that these salads are often short on!).  The pizzas  were very tasty and had good bases with a nice bit of char from the oven, but the bases were slightly too thick for my taste.  Toppings were generous though and with pizzas starting at around £10, I thought they were not badly priced for a hotel restaurant.  Service was friendly but surprisingly slow for a restaurant that was no more than half full, which is a little frustrating when you are keen to have an early night, but all in all, a pleasant meal and a relaxing start to the holiday. 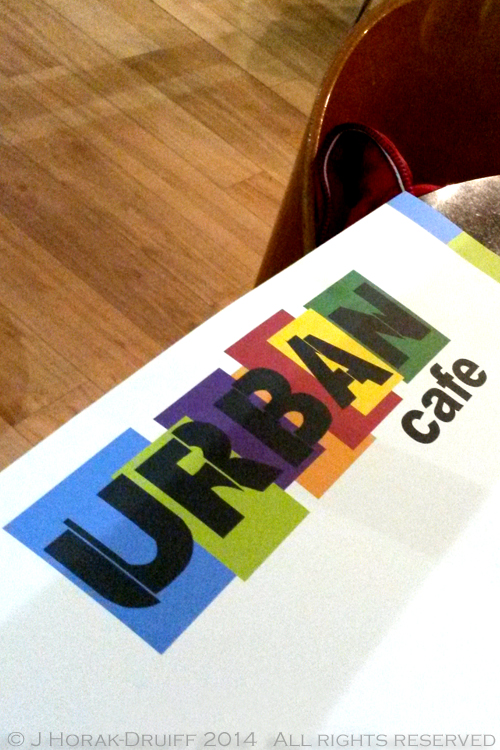 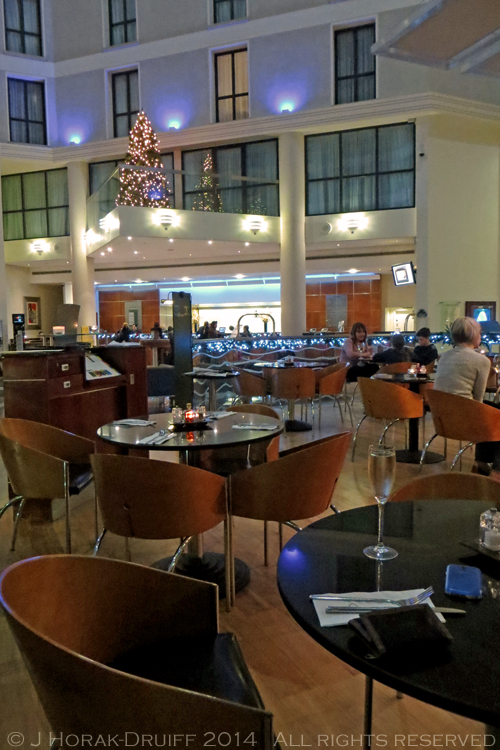 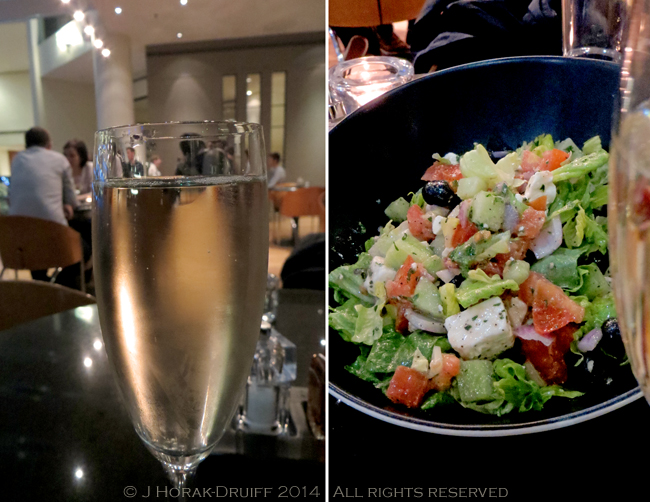 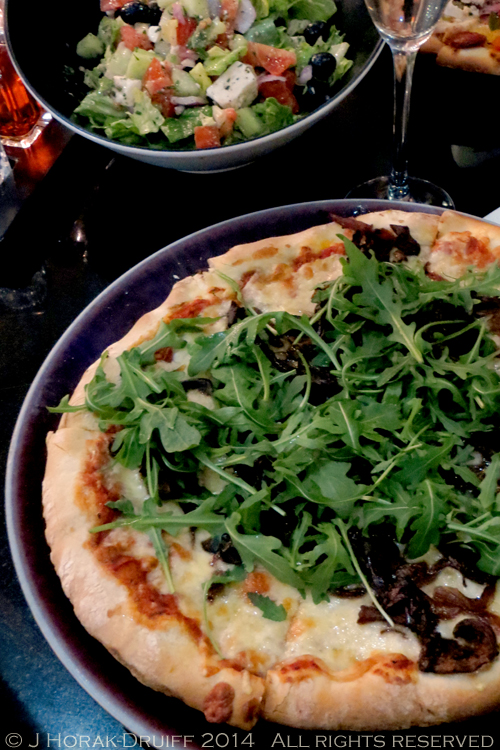 Sadly we did not have much time to try out the room amenities but I can vouch for the fact that the wi-fi connection was fast and logging on was hassle-free; the power shower was good; the White Company toiletries were lovely and far better than many hotels provide; and the bed was huge and very comfy, with covetable linen.  Check-out the following morning was quick and efficient, and the walk through the covered walkway to the check-in desks at Gatwick North took less than five minutes.

Classic rooms start from £100 per night (excluding breakfast) or from £124 for a Superior room (excluding breakfast).  It is also possible when booking to add parking and breakfast at preferential rates – I checked out the parking deals and they did in fact work out cheaper than booking the elements individually.  The hotel also offers a spa and a fitness club (open 24 hours – convenient for jetlagged guests!), as well as 9 conference rooms that can host a function for up to 300 people, making it an ideal hotel for events where people have to fly into London from elsewhere.

COOKSISTER’S VERDICT: If you live a long way from Gatwick, there can be no more convenient way to get to your early morning flight – no panic about the minicab arriving, no 03h30 wake-up calls – and no skidding off the M23 on black ice! The Sofitel London Gatwick is a full-service luxury hotel that allows the holiday to begin before you have left London.

DISCLOSURE:  I paid for my own stay at the Sofitel Gatwick but received media rates.  I received no compensation to write this post and retained full editorial control.  All opinions expressed are my own.

« Braised baby turnips and radishes – and a workshop!
Saturday Snapshots #283 »