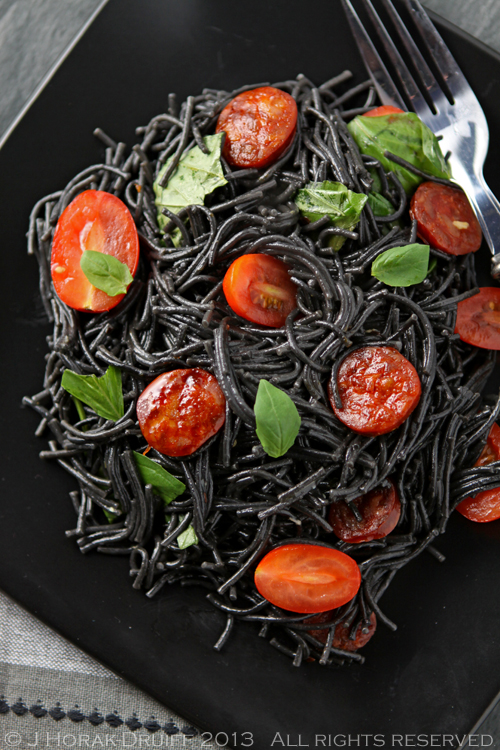 We’re funny creatures, human beings. We eat our sleekly packaged organic granola for breakfast;  we spend our days at our computers talking on the Interwebs to invisible folks on the other side of the world; we fill our free time with all sorts of self-actualising activities like yoga or going to classical concerts.  We imagine ourselves to be civilised and refined, and about as far down the evolutionary continuum from our prehistoric ancestors as it is possible to get.  But ultimately we still inhabit a physical body that is governed not so much by our big, logical cerebrum, but by our lizard brain – the bit of our brain that still remains pretty much structurally identical to the brains that evolved in reptiles millions of years ago.And we are still programmed to react to things in very much in the same way as  our cave-dwelling, woolly mammoth-hunting ancestors, regardless of how much of a veneer of change and refinement our daily lives have required. We are still programmed to crave sugar and fat – things which our ancestors found hard to obtain and gorged on when they could so as to save up for lean nutritional times in the future. Even if you’ve never suffered a single day’s nutritional deprivation in your life, the pull that sugar and fat exert on your lizard brain remains as strong as ever (which is how McDonalds makes their money!).  Eating black things, on the other hand,  has always been a bit a taboo.  Black is the colour of decay and spoilage – two things which might have made our ancestors seriously ill in the days before the NHS and antibiotics. But these days you can barely move for the profusion of fashionable black foods  that we are bombarded with.  Black wild rice.  Black Beluga lentils.  Caviar.  Black beans.   The list goes on, all subtly tinged with the exotic. It seems that black is, well, the new black. 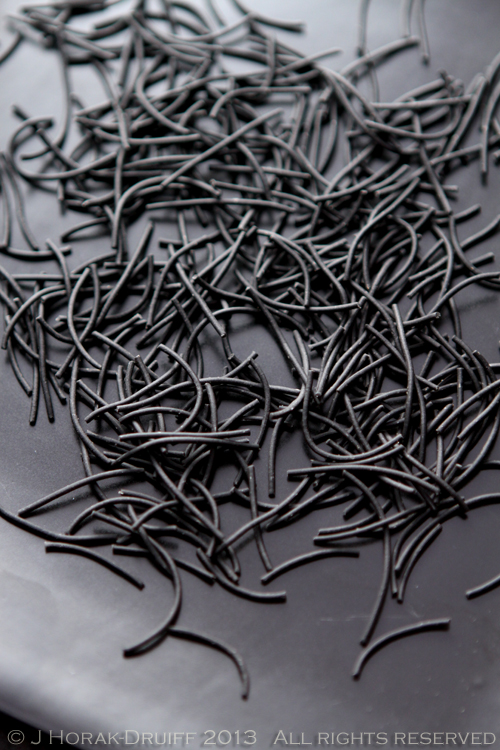 When I visited Portugal a couple of summers ago, we had lunch in a seafood restaurant on a tiny beach near Lisbon.  To choose your meal, you did not so much look at the menu as peer into the chest freezer to see the size of the fish on ice.  All the fish were served whole, so if there were only two of you, something the size of a salmon was out of the question.  If you chose a big fish, then the price was for two people.  If you chose something small like squid (as we did) the price was per fish.  Having made our selection, we were asked in semi-comprehensible English whether we wanted the squid with or without.  Umm – with or without what? It transpired that the question was whether we wanted to have the squid with or without ink and I had to admit that it had never occurred to me to eat a squid with its ink.  The Portuguese man next to us, however, ordered his with ink and ate with gusto, leaving his plate looking like a kind of pescatarian Rorschach inkblot diagram. 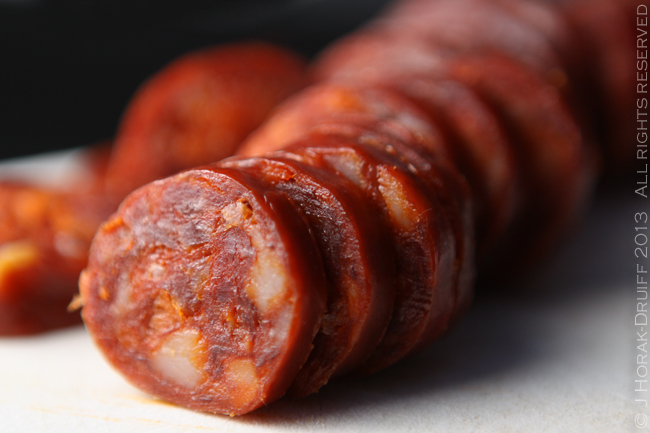 Although there isn’t a huge tradition of eating squid ink in the UK, it is a popular ingredient in Meditrranean countries including Spain, Portugal and Italy where is is sold in jars and sachets to add colour and flavour to foods such as rice and pasta.  The ink is a coloured fluid that can be released into the water by most members of the cephalopod (octopus/squid/cuttlefish) family to obscure them from view while they escape from a threat.  Far from being in any way harmful, it is made up of melanin, the naturally-occurring pigment that is responsible for skin colour (and a tan!) in humans.  The colour varies from species to species, ranging from dark brown through blue-black and pure black – much of the product on sale for culinary use is in fact cuttlefish ink as this has a more subtle and refined flavour. But if you are not entirely sure that you want to go the whole hog and buy a jar of edible ink for your larder, you could also buy some squid ink pasta which will give you the impressively jet black colour with a far milder flavour – squid ink lite, if you like. I was recently sent a hamper of Spanish food to review by the lovely and enthusiastic chaps at the Foodies Larder, who specialise in monthly hampers of fine foods sourced from artisan producers around Spain.  You can choose a monthly subscription (£30 per month), a three (£90) or a six month (£165) pre-pay plan; or even send a hamper as a gift to a friend.  You never know what will be in the hamper beforehand, but you can expect 6 products or so, plus a leaflet telling you a little more about each product.  In addition, the Foodies Larder website features great recipes making use of hamper items to provide you with some inspiration.  In my hamper I found: 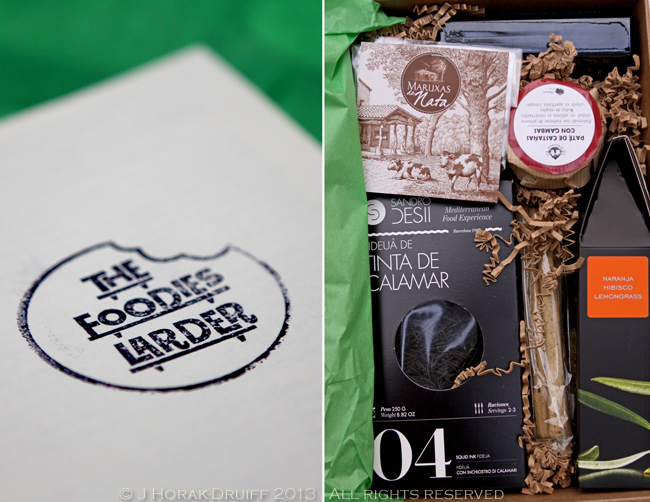 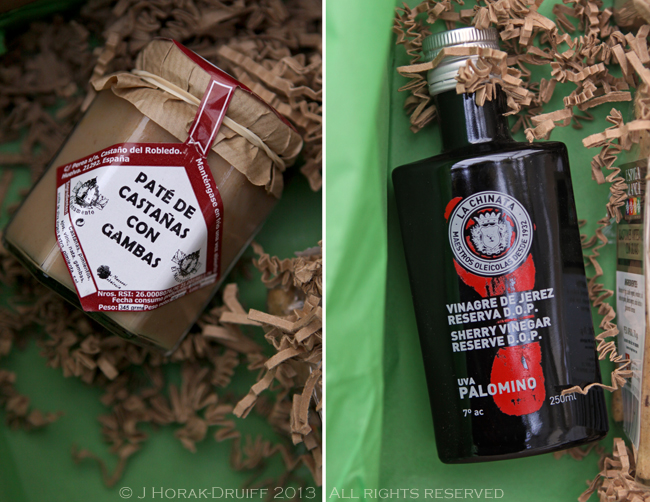 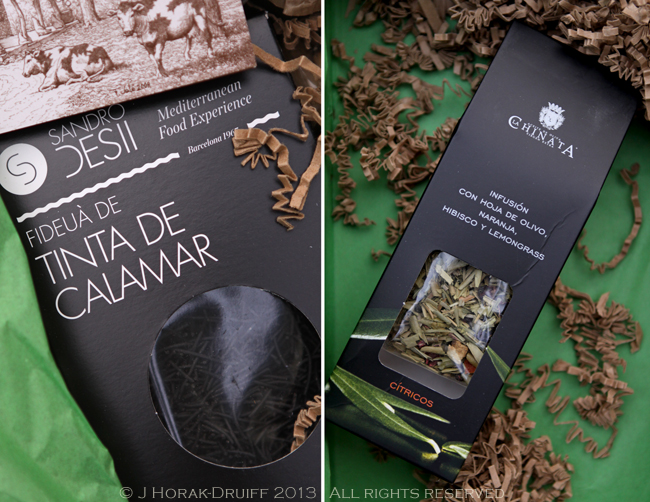 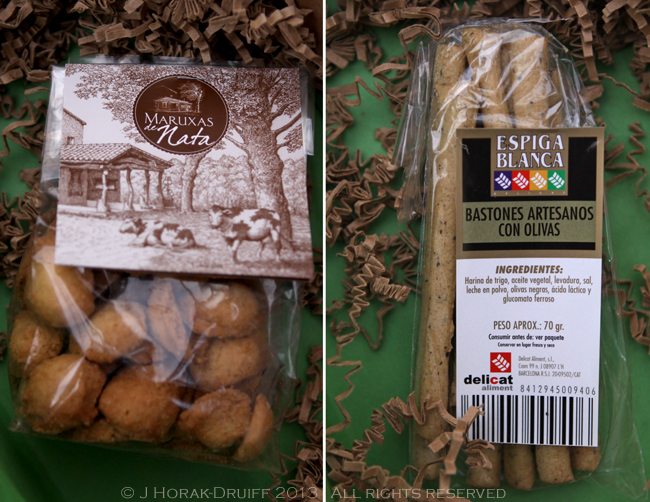 But the package that caught my eye was the Sandro Desii Fideua tinta de calamar (squid ink pasta).  I nibbled on a couple of the black olive bread sticks (like grissini flecked with black olives, and very moreish) while I did a bit of reading on fideua.  It’s the name of a dish that originated and remains popular in the Valencia region of Spain, and is similar to paella.  But in contrast to paella which uses rice as its base, fideua uses short strands of vermicelli-like pasta which is lightly toasted before boiling.  Traditional fideua recipes are very similar to paella, using seafood, fish stock and  and peas to flavour the noodles, but with the spectacular colour of my black fideua, I thought I’d try something a little more visually dramatic, while still in keeping with the pasta’s Spanish roots.  My version is quick to make, packed with flavour and looks utterly dramatic on the plate – a feast for all your senses and, of course,  your lizard brain.

DISCLOSURE:  I was sent  a free hamper from The Foodies Larder for review purposes but received no other remuneration to write this post and all opinions are my own. 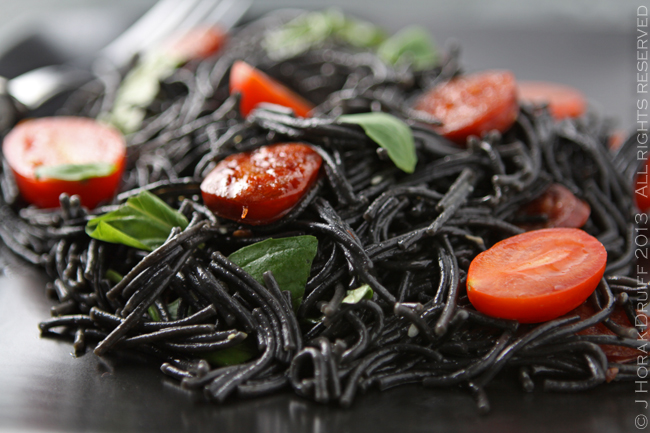