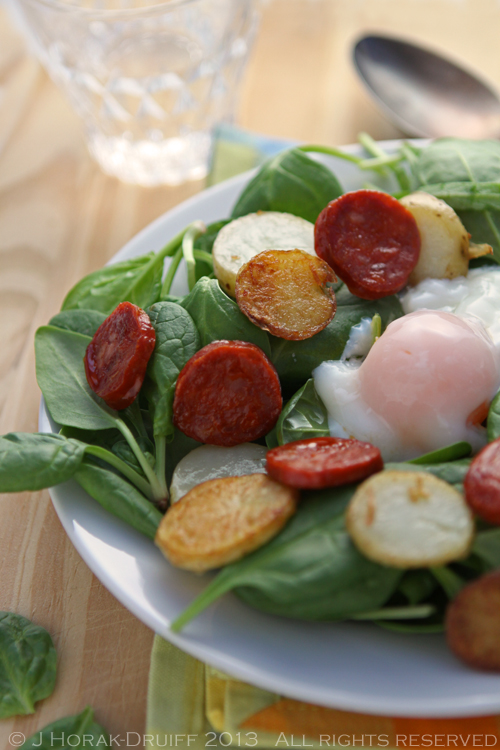 The human brain likes things to work in predictable ways. It’s comforting to know that the shoe we left by the front door when we went to  bed will remain there.  (Of course, when the dog decides to bring it to our bedside in the  middle of the night, our brains tend not to expect it there so we trip over it, stub our toes, swear a lot and make dire threats to the dog who sits there wagging his tail and grinning throughout.) It’s comforting to know that things in the oven tend to heat up and things in the fridge tend to cool down; that things that we drop tend to fall down instead of up; and that water boils at hight temperature and freezes at a low temperature. Any deviation from these comfortingly familiar norms is likely to throw our brains  into a tailspin. I’ve been cooking for myself for quite a number of years now and I think I have a fairly good grip on how things work in the kitchen.  Egg whites will whip up, given a clean bowl and a bit of elbow grease; butter and  chocolate will melt if heated; and sugar will magically caramelise if left in a hot pan. And, as every schoolboy knows, poached eggs can be prepared with solid whites and runny yolks, but not the other way around. Or so I thought.  But clearly that was the day before Mr Sous Vide Supreme came to town (or to my kitchen, at any rate!).

I’ve already done a couple of posts about my experiments with my Sous Vide Supreme machine:  a recipe for sous vide oxtail stew (which includes a detailed explanation of what sous vice cooking entails), and a recipe for duck breasts cooked sous vide with a charred orange and Cointreau sauce.  So I will restrict myself to a very brief recap here: sous vide cooking involves cooking food in vacuum-sealed pouches in a water bath slowly over a long period of time, at relatively low but constant temperatures. The benefits, when you cook meat, are that the juices stay in the meat rather than cooking out, resulting in a moist end product packed with flavour, and uniformly cooked throughout. But obviously an egg and a slab of rump steak are rather different beasts – and I was about to find out how different! The first difference is, of course, that unlike a steak which needs  vacuum sealing, an egg comes in its own convenient integrated sealed packaging, in the form of its shell. Purists say that it is strictly incorrect to speak about cooking an egg sous vide (meaning under vacuum) as the egg shell is not a vacuum seal, so I am hedging my bets with “sous vide” and “poached” both appearing in the title.

HOW TO COOK THE PERFECT SOUS VIDE EGG

The perfect sous vide egg (also known as the 60-minute boiled egg!) is something of an enigma, a culinary holy grail. Surely it can’t be that difficult, I thought?  I mean – hot water, an egg, some spare time.  What can go wrong? Much has been written about the cooking of eggs sous vide and my favourite piece for its detailed explanation of the science of the process and its diligent testing is by Fresh Meals Solutions (which quotes Douglas Baldwin‘s excellent book on the topic of sous vide cooking).  In brief, an egg is a pretty complicated piece of kit.  It consists of various forms of protein, and these different proteins with their unique biological structure all start to solidify at slightly different temperatures and rates. For example, at 61.5 C, the albumen (white) coagulates to form a loose gel; but it is only when it reaches 70 C that it coagulates to form a firm and opaque gel and at 84.5 C that it becomes rubbery.  The yolk, on the other hand, already starts to form a tender gel at 64.5 C and gets firmer and firmer as the temperature increases (the consistency of the yolk being a function not only of temperature, but of cooking time).

Now usually when we poach or boil eggs, this works in our favour. The egg goes into the water and gradually heats up from the outside in, meaning that while the white is already hitting the firm gel stage at 70 C, the yolk is only just forming a tender gel.  Whip the egg out of the water at this sage and you have a perfectly runny yolk encased in white that is firm enough to handle with your hands. I figured it could not be so different with sous vide eggs (a classic case of fools rushing in!) – thus started my three attempts at this particular salad. What I learnt almost immediately were  the practical consequences of the physics lesson ab0ve – and how unsettled your brain gets when things no longer work the way it expects them to.  You see, if  you heat your eggs to a temperature lower than 70 C, the yolk may be setting… but the white?  Not so much. So whereas the yolks of my sous vide eggs assumed seductive textures ranging from runny honey to lemon curd, the whites remained… frankly unattractively un-solid, clinging desperately to the yolk in a somewhat, erm, phlegm-like way. As soon as you cracked the cooked egg, the watery white would spill out, meaning that your plating was instantly messed up and the yolk left looking rather under-dressed. Much reading later, I discovered that a way around this unsettling but perfectly normal outcome of cooking eggs sous vide is to par-boil the egg so that the white starts to set, but not the yolk; then chilling the egg and cooking as per normal in the sous vide machine – a noticeable improvement. But as I was to discover, experimentation is the key to find your perfect sous vide egg. Here is a brief rundown of my eggy experiments:

Result:  Delicious yolks the consistency of runny honey but unattractively semi-set, semi-opaque white with an alarming tendency to separate from the yolk and disappear under the spinach leaves. Not worth photographing!

Result:  Delicious yolks the consistency of thick lemon curd, but the white puzzlingly not much more set than the first attempt.  The liquid portion of the white still tended to spill out of the shell upon cracking, and only cracking them into ramekins first and then spooning the most congealed portion onto the salad yielded visually acceptable results.  Tasty, though! [Note: the first and last pictures in this post feature this egg] 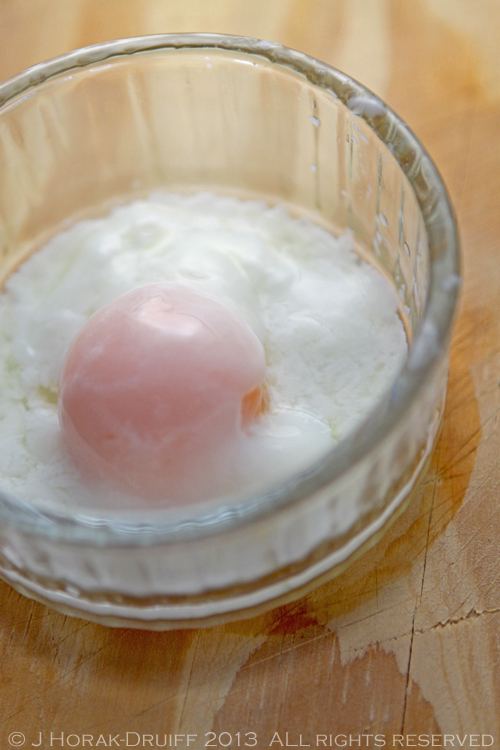 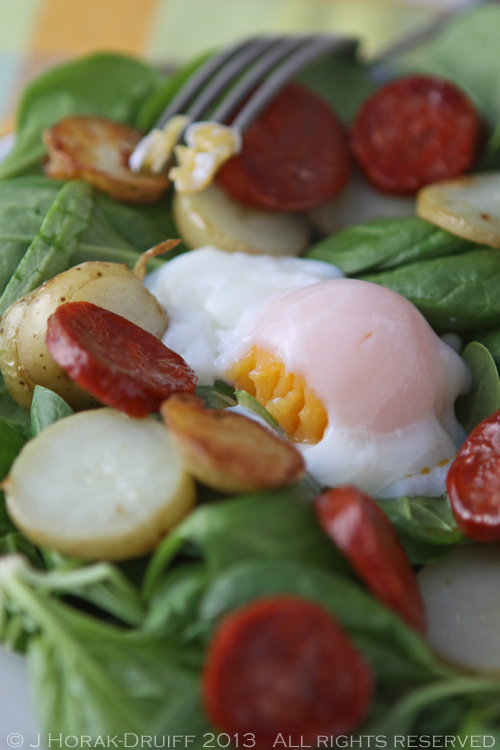 Method: Eggs par-boiled for 3 minutes and then rapidly cooled in a bowl of iced water.  Left to coll in the water for about 30 minutes, then cooked sous vide at 64 C for 60 minutes.

Result: A definite improvement and the best result yet! There was a lot less watery liquid in the shell and you could actually crack the egg directly over the salad.  The new issue with the white, though, was that while it had set fairly well near the shell, it was still pretty jelly-like near the yolk, resulting in the yolk and some of the white coming out of the shell easily, but the firmer layer remaining behind in the shell and having to be removed with a spoon.  The yolk was once again delicious and had the approximate consistency of Hellmann’s mayonnaise. 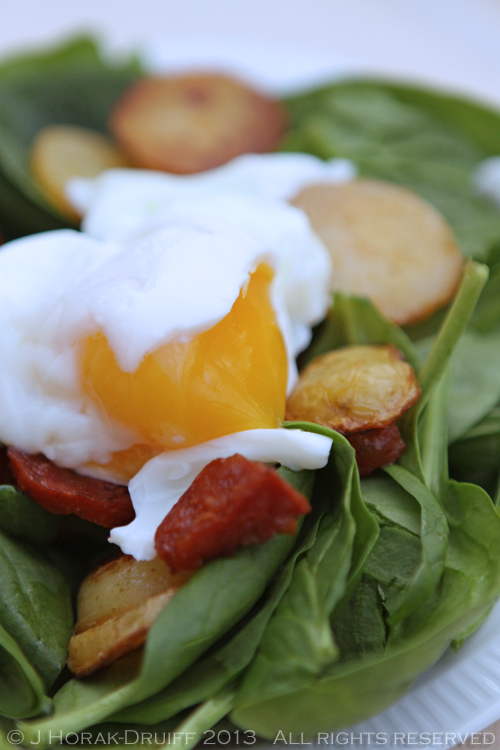 1.  Cooking an egg sous vide is not a substitute for soft-boiling or poaching.  You will get delicious results (with a little perseverance!); you will get intriguing results – but you will not replicate the effects of conventional cooking.

2.  The crazy honey/mayonnaise/lemon curd consistency of the yolk might not be to everybody’s taste, but I am quite smitten with it. I am thinking of spreading it on toast soon…

3.  Unless you like chasing your egg whites around the plate in semi-liquid form, par-boiling your eggs before sous vide cooking is definitely the way forward.

4.  These are (not yet) the eggs I’m looking for. More experimentation is needed – for example par boiling, then cooking low and slow – say 63 for 120 minutes. But I am convinced that I will get there in the end!

Given that  I have made it three times already, it’s a good thing this salad is so simple and delicious – even Nick has not complained about its repeated appearance on our table.  I love the hot/cold contrast as well as the spiciness of the chorizo that is so nicely offset by the creaminess of the eggs and the freshness of the spinach.  Of course, you do not need a sous vide machine to make it – it would work just as well with a poached egg.  But think of the fun you could have experimenting to find your perfect sous vide egg… 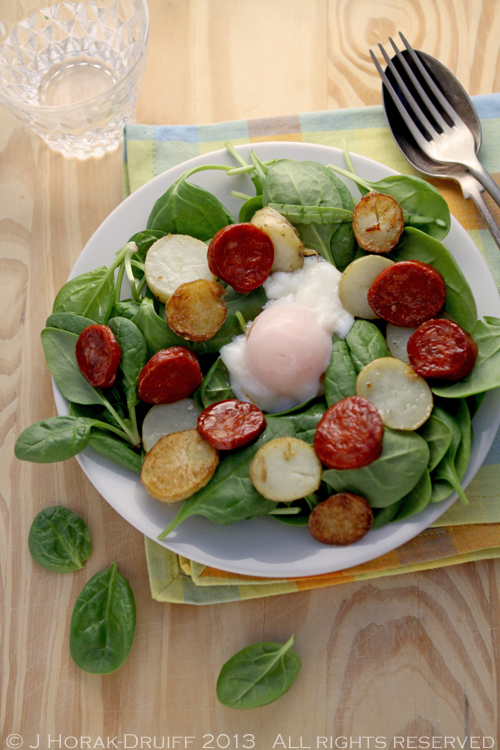