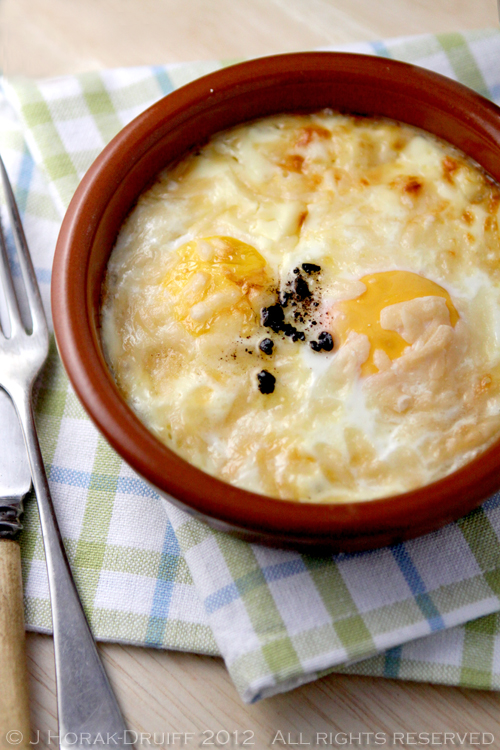 I set foot in France for the first time when I was 14, stepping off a UTA flight and into the warm air of a Nice evening. My father had finally decided that at 11 years old, my brother would be old enough to appreciate foreign shores and booked tickets for the family to accompany him to a medical convention in Bordeaux, followed by a 3-week jaunt around France, literally circumnavigating the country: Nice, Bordeaux, Brive-a-Gaillarde, Mont St Michel, Rennes, Paris, Lyon, Annecy, Chamonix and a brief sojourn in Monaco and San Frutuoso before heading back to Nice and the plane home.  As you can imagine, these were 3 weeks of sensory overload for me: the language, the colours, the smells, the sounds and the food all conspired to make France a magical place in my mind for many years to come.  But of course, it also means that now, years later, I cannot remember clearly which events happened in which city as they were all a blur of new discoveries and excitement.  But I do know that it was on this trip that I first heard the phrase le roi des cuisiniers et le cuisinier des rois, referring to one Georges Auguste Escoffier, the father of the modern kitchen and French menu.

Born in 1846, Escoffier is probably one of the best-known names in classic French cuisine, even though his contribution lay more in simplifying and modernising the elaborate haute cuisine which Marie-Antoine Carême had already codified.  His other lasting contribution to the culinary world was introducing an organized discipline to his kitchens. He organized his kitchens by the brigade de cuisine system, with each section run by a chef de partie and performing only one specialised task.  He also wrote a number of books, including the Guide Culinaire which is still used today as a major cooking reference work and recipe book for French cuisine, and his techniques have been adopted around the world. But in NM Kelby’s new book White Truffles in Winter, it is not so much Escoffier’s career in the kitchen that we explore, but rather his complex relationship with the women in his life, and his unwavering obsession with food and its ability to express that which cannot be expressed in words. 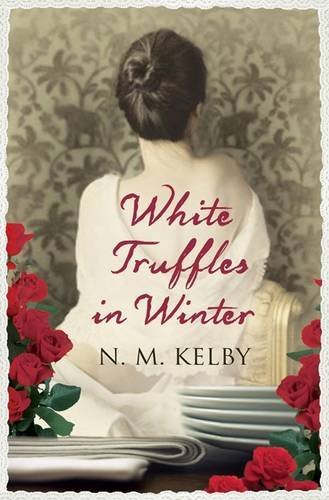 Set in the last year of Escoffier’s life, the book finds him writing his memoirs and through this prism we can look back at some of the most significant relationships in his life.  There is his wife Delphine, a poet whose hand in marriage he wins in a game of pool, having admired her from afar. Then there is Sarah Bernhard, the celebrated French actress with whom Escoffier conducted a decades-long affair. And then there is his relationship with cooking and food, which runs like a golden thread through the rest of his life’s narrative.  When the book opens, we find Escoffier back in Monte Carlo in La Villa Fernand after half a lifetime of living apart from Delphine who, bitter and unhappy about Escoffier’s ongoing affair with Sarah, had efused to accompany him to Paris or London.  Delphine is by now old and unwell and has hired a flame-haired and somewhat anarchic housekeeper (Sabine, a dead ringer for Sarah) to manage the house.  While Escoffier seems intent on finishing his memoirs, Delphine’s last wish is that the man whom she has loved so intensely and who created dishes for so many other people, should create one to carry her name, and she enlists the reluctant Sabine’s help to try and bring this about. The book alternates this narrative with chapters from Escoffier’s imagined memoirs, The Complete Escoffier – a memoir in meals and is written in the 3rd person so that we get to view the situation from Escoffier, Delphine and Sabine’s viewpoint at various times.  There are also many references to actual historic events and incidents in Escoffier’s life, such as the hotel fire where he saved many people, and his friendship with Kaiser Wilhelm II.

The relationship between Escoffier and Delphine is complex and at first, makes very little sense to the reader.  They have, in effect, an arranged marriage and yet this grows into  deep affection and a passion which endures until late in their lives through many tribulations.  There are definite parallels between her and Sarah, and Sabine.  All three are headstrong and independent in their own ways – yet while Sarah always places herself at centre stage, begging Escoffier to feed her or accompany her on her travels, Delphine feels that by leaving Monte Carlo to follow Escoffier would mean that she would lose herself – and so she chooses independence over love. Sarah, although modern and bohemian to the end, seems to epitomise the opposite of Delphine:  sometimes a seductress and sometimes a petulant little girl who has to be fed by hand to coax her to eat. But to me the most intriguing character of all is Sabine, who is independent and headstrong and truculent, but who nevertheless grows touchingly loyal to the Escoffiers.  She is also the only one of the main characters who seems to be capable of finding lasting love. 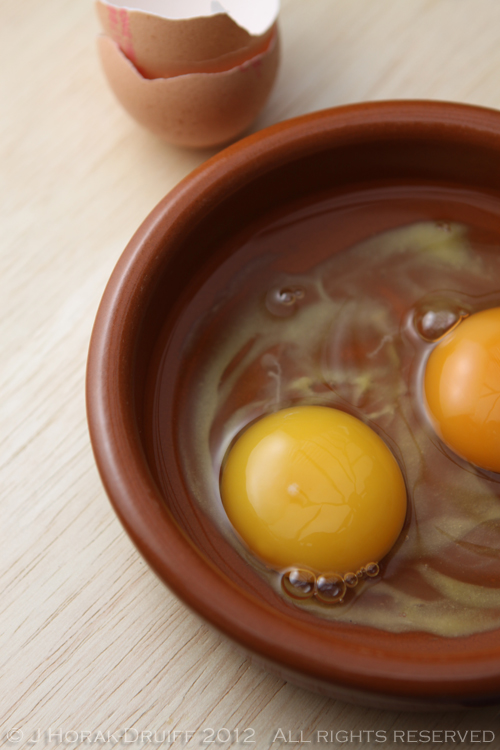 But more fascinating than all these relationships are the relationships that Escoffier, Delphine and Sabine have with food. Escoffier is already immersed in the world of food when we meet him, but both Delphine and Sabine are taken under his wing and come to love and respect food in much the same way as Escoffier does himself.  Escoffier woos Delphine not with words but with cooking and one of my favourite interactions between Escoffier and Delphine is a game they play in which one of them lists the ingredients and theother has to guess the dish – a game for true obsessives, but also a courtship ritual in a life defined by food.  Escoffier and Delphine’s gentle coaxing of Sabine to truly taste and think about the food she is cooking is also beautifully chronicled and made me want to take more time in my own kitchen to truly savour ingredients. In fact, the true delight in this book is the food, described in loving detail as it is being cooked and as it is being eaten.  Elaborate menus are reproduced in detail and ingredients are described so sensuously that you can almost taste them in your own mouth – the descripition of snow apples towards the end of the book is a good example. Escoffier meditates repeatedly on the power of food to capture a moment in time or an emotion far more accurately than a diary entry or a photograph – “the only way to combat forgetting is to cook”.  Recreating and tasting the dish brings back the moment as vividly as turning back the clock.  Throughout the book we see Escoffier at a loss for words – words to describe his love, or his remorse – and attempting to communicate the depths of his feelings for Delphine by cooking something for her or sending her anonymous gifts of expensive ingredients. Food is used repeatedly as a metaphor for emotions that cannot be expressed in words: secret love for a mistress; enduring love for a spouse through years of infidelities; or new love as yet too delicate to put into words. Kelby’s descriptions of food and the emotions it kindles are sensuous without being overblown and evocative without being sentimental.  The book is both beautiful and wistful and will definitely appeal to Francophile food lovers everywhere.

At one point in the book, Delphine decides to teach Sabine a new dish: oefs sur le plat.  Depite the name, these are not (as Delphine puts it) American style fried eggs, but something far more subtle and complex. Delphine instructs Sabine to add the butter, eggs, cream and truffles, but it is Sabine herself who suggests the addition of cheese as she finally starts to imagine what ingredients might taste like together – a pivotal moment for her. It sounded simple yet decadent – both things that I value in a dish!  There is no exact recipe in the book so I made up my own.  I was convinced I had brought back a tinned truffle from France, but alas I was wrong – so if you are more organized than me you can shave truffles over the top of the finished dish. Alternatively, you can do as I did and top the finished dish with a blob of decadent Italian truffle butter, which works very nicely indeed. It’s is a bit tricky to get the yolks to stay runny, especially when you cook it in a teracotta dish as I did which retains heat – next time, I may bake the dishes in a water bath. The end result is spectacularly good as a lazy weekend breakfast with wholewheat toast triangles and a glass of Moët – as Escoffier would have suggested. 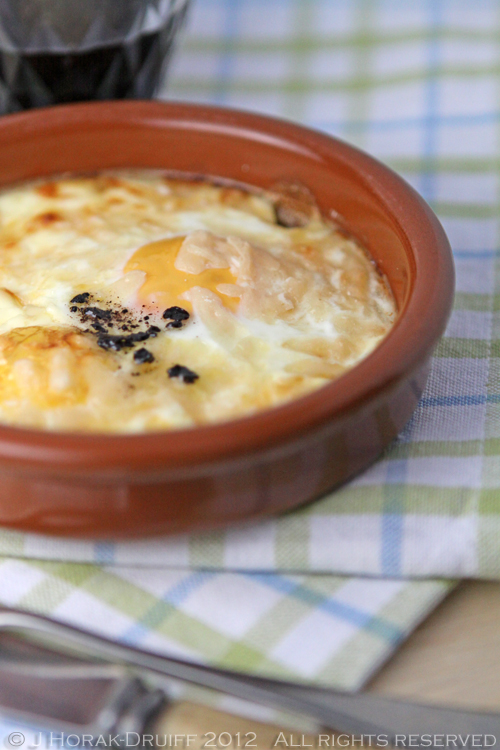 Use butter to grease 2 individual ramekins, each big enough to hold 2 eggs, and add a little salt and pepper on top of the butter.

Carefully crack 2 eggs into each ramekin, taking care not to break the yolk. Spoon 2 Tbsp of cream over each ramekin, and sprinkle each with half the cheese.  Bake for 10-12 minutes or until the egg whites are just set (they eggs should still be wobbly in the middle of the dish.

DISCLOSURE:  I received a review copy of this book free of charge from the publisher.