Well, the English have their chicken tikka masala; the Italians their pizza; the French their escargots; and the Americans their apple pie. Each nationality seems to have one meal that they embrace 100% and make their own, build legends around, and present to the world as their culinary shorthand. And South Africans?  We have the braai (pronounced to rhyme with fry – and please note the correct spelling!  Many non-South Africans persist in calling it a “braii” which is simply wrong.  The double i vowel combination does not even exist in the Afrikaans language…).  The cross-cultural, non language-biased, age-neutral activity that all South Africans indulge in with an equal fervour; that South Africans can wax lyrical about, with wistful tears in their eyes; and that South African expats can happily indulge in anywhere to alleviate their homesickness.  In fact, we love it so much, we even created a day to celebrate the braai.  You see, 24 September every year is Heritage Day, the day when we celebrate South Africa’s rich cultural heritage and diversity.  But as interesting as what makes us diverse, is what makes us the same:  we all love a good braai.  So a couple of years ago, we also started celebrating a cheeky unofficial holiday on 24 September:  National Braai Day.

Even though Braai Day falls in deepest darkest Autumn over here in the Northern hemisphere, it falls in Spring in the South – so in fact if you are lucky, it is the brief window when BOTH hemispheres actually have the weather to braai.  This is the third year (click to see the 2010 braai recipes or the 2011 braai recipes) that I invited my readers to submit their favourite braai recipe for Braai, the Beloved Country (my annual event and a pun on the title of a very famous South African book by Alan Paton), and here is what they threw on the grill:

STOP PRESS:  I managed to lose the entry that the lovely Robin Ove from What About the Food sent me in my messy, messy inbox – huge apologies, Robin! She writes so eloquently about a morning in Tunisia that you would swear you were actually walking through the market, smelling the smells and tasting the tastes.  She also manages to use some South African Peppadews in her recipe for spicy Tunisian chicken kebabs – bonus points! My talented friend Simone of Junglefrog Cooking arrived first at this year’s braai with a tantalising recipe for beef and harissa kebabs from Morocco. These spicy, succulent treats remind me a lot of South African sosaties and I love how suchsimilar dishes could have originated at totally opposite ends of such a diverse continent. 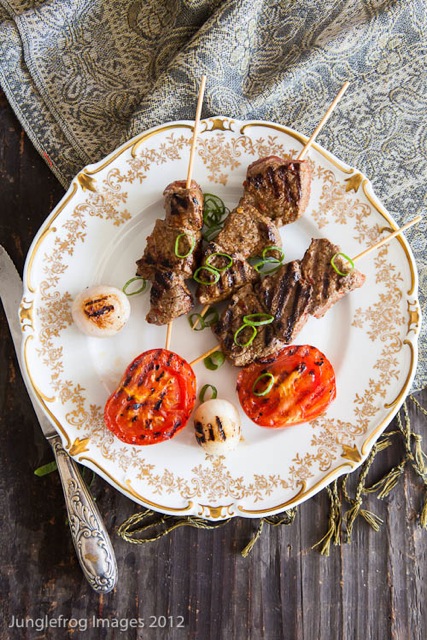 Next to arrive was another proudly South African foodie:  Anina from Anina’s Recipes.  She writes: “I can get quite nostalgic thinking about those lazy summer weekends, under the lapa, in the pool – the smell of chalky fire filling the air, simmering away to produce burning red coals that sizzle for eternity when that piece of meat hits the grill.” To tantalise us, she hosts a burger braai and shares with us not only a handy step-by-step guide to making your own burger patties, but also her recipe for homemade burgers with fresh avocado, chives and pecorino cheese sauce. The next entry moves away from red meat as my darling blogMamma Colleen of Browniegirl Blog keeps it light and fishy.  She lives a stone’s throw away from the ocean so her fish and bay leaf kebabs partnered with a zingy Clemengold clementine salsa sound perfect for lazy summer braais by the beach – and can you think of a better way to spend your Heritage Day? Staying in sunny South Africa, the next entry came from one of my dearest blog friends Kit of Food & Family.  She points out that chicken wings seem at first to be a rather unpromising prospect, all skin and bone – but those exact characteristics make them perfect for the braai:  quick to crisp and easy to eat. Kit serves up some spicy chicken wings on the braai, rubbed with her own secret spice blend – so good I can almost smell them! And staying in South Africa, our next entry comes from Barry of What’s Cooking (if you don’t know his blog, have a browse around for some fab South African recipes).  He has found (as have I!) that the world and its dog is always keen to hold themselves forth as braai experts, but when you sample their creations you often come back down to earth with a bump.  He explains that the secret of his bacon-wrapped Springbok fillet on the coalsis to cook fast over very hot coals, to yield crisp bacon and tender, juicy meat.  Sounds like a plan to me! It seems you could not keep Barry away from the braai this week – he submitted two entries!  Like in this house, Barry maintains that despite all the fancy schmancy things that people put over coals, the best thing to braai is a good lamb chop.  The trick is to crisp the fat; not to mess around with crazy sauces and marinades; and to leave the meat seared on the outside and pink on the insode.  And in the end he presents us with perfect lamb chops on the braai. 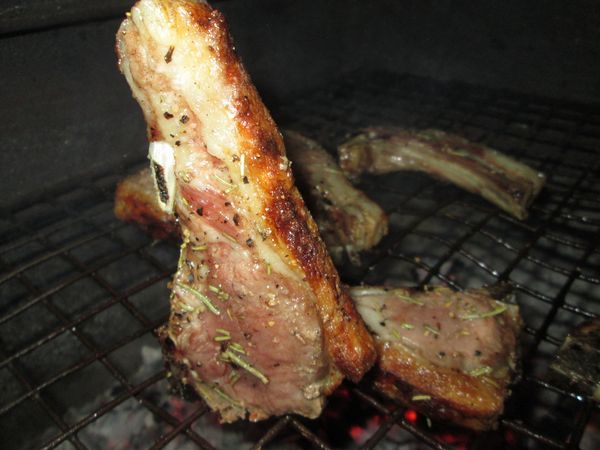 Leaving South Africa for a moment, we head over to Dubai, where my lovely friend Sally ofMy Custard Pie is taking part in Braai the Beloved Country for the third year in a row!  Sally recently visited a Dubai restaurant (Tribes) serving food from all over the African continent and enjoyed a meal that included tripe stew, yam mash, chicken giblets, mealiepap (a maize meal porridge) and peri peri prawns. In fact, she liked the prawns so much that she submitted peri peri prawns on the braai as her entry into this year’s event.  Can almost smell their spicy fragrance! (And even better – Sally will be having dinner and a sleepover at my house on Thursday night when she arrives in London – can’t wait!) Of course, no party at Cooksister HQ would be complete without my sister-from-another-mother Meeta of What’s for Lunch Honey.  She writes about the excitement of changing seasons, and hosts a late summer middle-Eastern barbecue feast, featuring delectable salads and a spectacular centrepiece of Ras el Hanout salmon on the braai. Colourful, spicy and gorgeous – just like Meeta herself! And last but not least, there is of course me, the Cooksister! I hosted a summery braai at home with an Italian slant:  bruschetta for starters, cheese and mostarda for dessert… and in between, a fabulous Italian inspired Parma ham and Parmesan cheese-stuffed pork loin on the braai. It was easy, it was fabulously flavourful – it was fabulous.  Need I say more? If you are interested, my previous entries for this event were spicy apricot and lamb sosaties and whole grilled sea bass. And that, as they say, is that for another year – except for the awarding of 2 little prizes that I promised you.  The first prize goes to the best recipe submission.  I decided this very scientifically (!) by showing my braai-obsessed husband a list of only the photos and titles of the submissions, without telling him who they were from.  As a winner, he picked…  the beef and harissa kebabs – so congratulations Simone of Junglefrog Cooking!  The second prize was a random draw from the people who have “Liked” the Cooksister Facebook page since I announced this event on 28 August and the winner as chosen by Randomizer is…Peggy Hulme!  Congratulations to you both – you will be receiving a copy of Braai Masters of the Cape Winelands shortly!

Thanks to all who took part and until next year, may the wors be with you!