You are here: Home / London food blogger events / A taste of Sweden – dinner at the Swedish ambassador’s residence 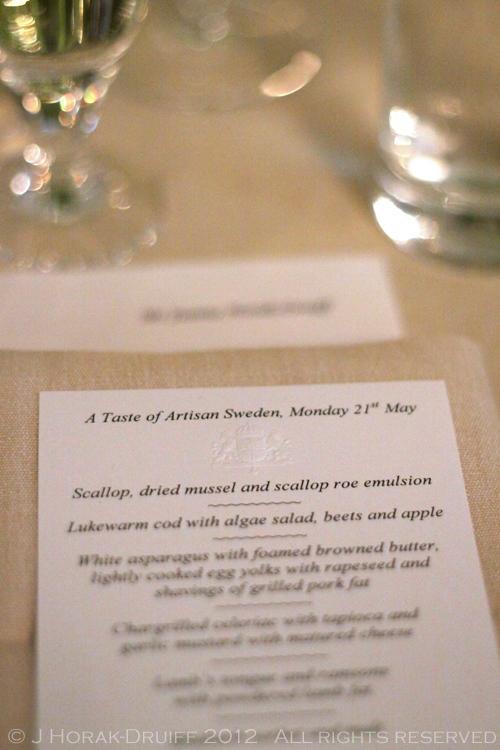 Isn’t it funny how some nights, you get ready for a party effortlessly:  everything you put on looks good; your mascara goes on without a smudge; and you arrive on time and relaxed.  Once at the party, the smooth sailing continues as you make witty small talk with interesting strangers; sip champagne and juggle canapés; and generally feel like the belle of the ball.  And then there are The Other Nights – like when I attended a dinner hosted by the Swedish ambassador to London, Nicola Clase, at her official residence in May.I fell through my front door in a state of exhaustion after four hours of driving from Somerset, having spend 3 days teaching non-stop workshops at Plate to Page.  It was 16h30, and by 17h00 I have to be on my way to dinner. Cue speediest shower in creation, and throwing on of first frock that came to hand as I reached blindly into the closet. The Tube gods were kind and I did manage to arrive at the residence on time, if slightly out of breath.  Having presented my embossed invitation (!) at the door, I tried to assume some sort of air of  composure and nonchalance before ascending the grand staircase.

“Lovely building, isn’t it?” asked the friendly chap ascending the stairs with me. I agreed and soon we were chatting companionably in the reception room over a glass of champagne. He asked how I was connected to the Swedish embassy and I said: “To be honest, although I am thrilled to be here, I have no idea why I was on the guest list.  Everybody else here seems so much more, umm, adult and important than me!”. He replied with a twinkle in his eye: “Oh, don’t you worry, I never seem to know what I am doing at these events either!”. I countered with: “So, how are you connected to the embassy?”. “Well, you see, I am married to the ambassador”, came the reply. Please, floor, swallow me now. I stammered that I had seen somebody I knew across the room and made my excuses (well, I had actually – the lovely Fenella who took these awesome photos at my Swedish Blind Date dinner).  Having gotten over the worst of my mortification, I rejoined Mr Ambassador who was by then chatting to a chap who looked like am edgier, younger version of Allan Cumming and who was downing elderflower cordial by the gallon. “God, I have such a hangover!”, he said to me sotto voce after we were left to chat alone – a kindred spirit! Like me, he was a bit hazy as to why he was invited, but from the conversation it became apparent that he was the chef-owner of a fairly new restaurant.  “Business OK?”, I asked.  “Oh yeah, we have this really good value tasting menu, so we are pretty fully booked.”  I had meant to get his card, but as we were seated at separate tables for dinner I forgot to ask later. All I remembered was that he was called Ollie – as my friend Google told me later, Ollie Dabbous.  Yes, folks, I had spent 20 mins chatting and trading hangover stories with the Hottest Chef In The Cosmiverse, with no clue who he was.  Sigh.  What kind of food blogger am I?!

Onwards and upwards.  Soon we were ushered through to the dining room where I found myself seated next to Christoffer Hruskova of North Road restaurant, awaiting the main event:  the food!  The chefs for the showcase dinner were Daniel Berlin, Ola Rudin and Sebastian Persson, all flown in from Sweden.  Daniel is the chef and owner of a small restaurant in Österlen. He was the winner of the international S.Pellegrino & Acqua Panna Young Chef Of The Year 2011 in Venice. Ola and Sebastian are chefs and former owners of the internationally praised avant-garde restaurant Trio in Malmö, but have just opened a new venture, the Saltimporten Canteen. These three chefs represent some of the most creative minds in Swedish cooking at the moment, and their brief was to prepare an exceptional meal that displayed the latest in Swedish cuisine and ingredients. 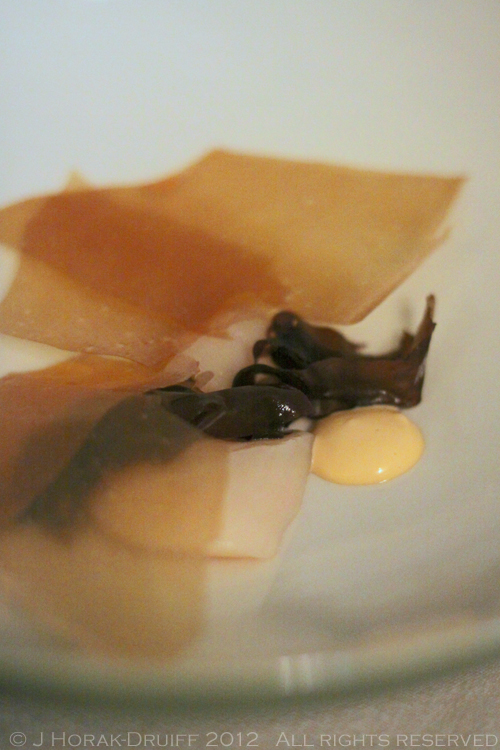 We started off with scallop, dried mussel and scallop roe emulsion. This was a wonderfully delicate plate, consisting of slices of deliciously wobbly raw (or lightly smoked?) scallops, a twist of seaweed and a blob of creamy scallop roe emulsion.  But my absolute favourite bit was the “dried mussel” – gossamer-thin, crispy translucent crispy sheets of (presumably) mussel “juice”.  If you let them melt on your tongue you could easily convince yourself that you were eating a mussel, yet at the same time you could choose to bite down on them with a satisfying crunch.  I loved everything about this plate of textural contrasts. 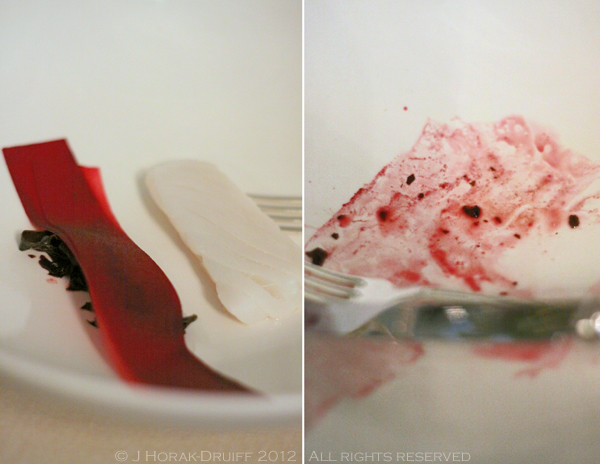 Next up was the rather unappetisingly named lukewarm cod with algae salad, beets & apple. “Lukewarm” is never a word to inspire confidence or enthusiasm; and although we all know and love the benefits of seaweed, we are still a bit averse to seeing it called algae on a menu! But to judge a book by its title would be unfair.  The cod was silken in texture and the beets came in the form of beetroot fruit leather strips, lending colour to the plate and creating an interesting contrast with the salty seaweed. Next came one or my favourite courses: a very seasonal dish of white asparagus with foamed browned butter and lightly cooked egg yolks with rapeseed and shavings of grilled pork fat. Question: why does everybody not use browned butter in everything? Its subtly nutty taste lifts everything it comes into contact with, and the white asparagus in this dish were no exception.  The porky shavings added flavour and the nearly-raw egg yolks carried on the theme of the wonderful edibly yellow spring flowers. A wonderful take on plain old green asparagus and a poached egg. This was followed by a bit of tableside theatre.  Before the chargrilled celeriac with tapioca and garlic mustard with matured cheese was brought out, a waiter came to each table holding what appeared to be a giant baked potato that had been carelessly forgotten in the oven for a couple of hours too long. But when he parted the two charred halves, it became apparent that this was in fact the chargrilled celeriac, all blackened and steaming. The plated dish consisted of a quenelle of this smoke-sweet celeriac flesh atop some vivid green tapioca, over which was poured a creamy sauce contaning the mustard and cheese.  It was an inspired combination of flavours and textures, from smoky to salty to tangy – and that vivid green tapioca to lift the colour. This was followed by my favourite dish of the night: lamb’s tongue and ramsons with powdered lamb fat.  I have to say, my first thought was whether it would look distressingly like… well, a lamb’s tongue.  And I guess if you scraped away all the garnish, it would.  But what arrived was some of the prettiest plating I have ever seen:  the meat flanked by pieces of sweet onion and topped with icing sugar-like powdery drifts, scattered with delicate wild garlic flowers.  This was love at first bite.  The tongue was tender and unmistakeably lamb-flavoured, while the ramsons added a delicate garlic flavour.  But the piece d’resistance was the powdered lamb fat which started out the consistency of cornstarch, but melted magically to the flavour and consistency of lamb fat on your tongue. Mesmerisingly delicious. What I like about Swedish desserts is that they are nor overwhelmingly sweet – and this one was no exception.  The rhubarb sorbet and malt consisted of the delicate pink and deliciously tart sorbet, topped with crispy fried leaves (which I think we discovered were rhubarb leaves – which we had all assumed to be poisonous!) and crispy malt with an appealingly slightly bitter flavour.  This left us all wondering why malt is not used more often in desserts! 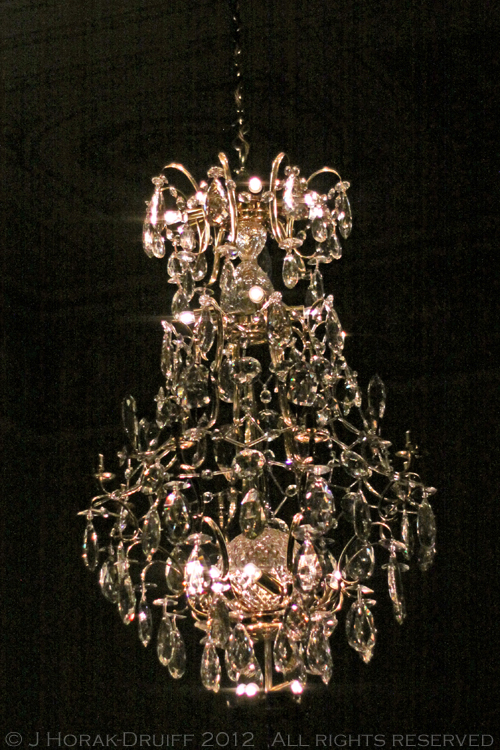 As a showcase for the innovative new cuisine increasingly being produced by young Swedish chefs; and a reminder to people that there is a lot more to Swedish produce than Koparberg cider and IKEA lingonberry jam, the evening was a roaring success.  I was told during the course of the evening that the Ambassador often opens her home for dinners and functions such as this, highlighting some aspect of Swedish culture, and I think it is a wonderful idea.  With Helsinki being selected as the Design capital 2012; and Noma in Denmark being voted the world’s best restaurant for the third year in a row, Scandinavia’s star is certainly on the rise – and Sweden’s produce and chefs are certainly at the forefront of this new foodie crusade.

DISCLOSURE:  I enjoyed this dinner as a guest of the Swedish Ambassador in London.

And while we’re chatting, don’t forget to submit your entry to my annual barbecue event, Braai, the Beloved Country! Participants also stand to win one of two copies of Braai Masters of the Cape Winelands – so get the fire going right now!  Details of how to enter can be found here.

« Prosciutto & Parmesan-stuffed pork loin – and win a book in my barbecue event!
Jacob’s Creek wine dinner at No. 35 @ The Hempel »