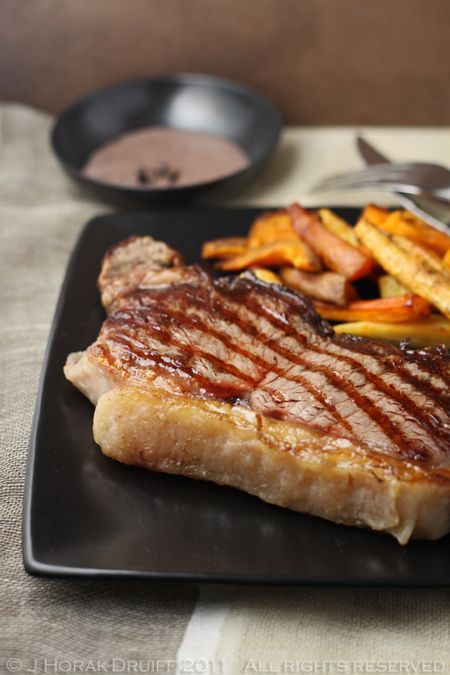 I received a wonderful and aposite e-mail the other day with the subject line “You know you are getting middle aged when…”.  Here are some gems from it: So… whatever happened to supermarkets with real butchers working behind the fresh meat counter?  Growing up in South Africa I remember every supermarket having a meat counter manned by huge men in white coats wielding cleavers, hands as big as the hams they were selling, chatting cheerfully with shoppers over the shrill sound of the meat bandsaw carving carcasses into neat, familiar cuts. They could tell you what meat was best to buy on a particular day; how best to cook a particular cut; and they could debone a leg of lamb for you before your  very eyes.  And I am not talking high-end delis or expensive places here –  we shopped at Checkers (which is about as middle-of-the-road as Tesco is here in the UK).  Once we moved to London, though, I quickly learned that this was not the way UK supermarkets sold meat.  Sure, you can go to Waitrose where there are lovely butcher’s counters staffed by knowledgeable people – but if that was beyond your price range (which it certainly was when we first came to the UK!) you were stuck with pre-packaged meat, or searching for a good, affordable and nearby butcher (not that easy in some parts of London.)

But there is hope, it seems.  A couple of years back, UK supermarket chain Morrisons launched their “Market Street” concept – namely that under the single roof of a supermarket, there are individual “market stalls” – like a proper on-site butchery and fishmonger, staffed by real people who can cut things according to your requirements and give advice on cooking. I recently had an opportunity to test drive the Family Butcher counter in their Stratford store when they very kindly asked me to participate in their British Beef Recipe Challenge.  The store has recently launched their traditional British beef range, all sourced from British heritage breeds, and properly aged.  Most commonly used beef cattle in the UK are French breeds.  In contrast, native British breeds such as Shorthorn, Hereford and Aberdeen Angus (selected by Morrisons for this range) are slower-growing and smaller.  Because of the chilly British climate, they also tend to develop a good marbling of fat in their meat (as fat is a means of keeping body heat in) which translates into better flavour. Morrisons has been working with 200 farmers to produce their traditional beef, using animals that are reared outdoors and fed on their mother’s milk and grass, until 3 months before slaughter when they are fed a special cereal-based diet to encourage the laying down of fat reserves. The meat is then also hung and dry-aged for 28 days to intensify its flavour.

It was this range of beef from which Morrisons recently invited me to choose a cut and to create a recipe using it.  Never one to turn down a challenge, I headed for Stratford Morrisons where the two available cuts from this range were topside and sirloin.  One look at Nick’s face and the decision was made:  sirloin!  Unlike prepackaged supermarket steaks that are usually too thin, the butcher asked us how thick we wanted them sliced, meaning we could get proper inch-thick steaks that would not dry out in the pan.  I have managed to throw out the packaging without taking note of the per kilogram price – but two gorgeously marbled, inch-thick sirloin steaks came to around £12. The only thing I was planning to do with them was pan-fry them super simply to show off the quality of the meat – so the only remaining question was what to serve with them?

I had never heard of Tasmanian pepper until I opened my Plate to Page goodie bag in Tuscany last month to discover a box of four sleek black bottles of seasonings from German company Smaromi.  Hmm, “how different can Tasmanian pepper be from plain old black pepper?”, was my first thought.  And granted, there are similarities.  Both plants belong to the botanical subclass of Magnoliidae and the dried peppercorns look pretty similar. But they come from rather different plants – black pepper is a vine native to India and Tasmanian pepper is a shrub native to Australia.  The fruits of both are dried to make the end product, but whereas black peppercorns are hard and contain only a single seed, Tasmanian pepper has a far softer exterior (you can crush it with the heel of your hand) and contains several shiny black seeds. The aroma as you open the bottle is intriguing, almost floral in its complexity but it’s the taste where the greatest difference lies.  There is indeed a spicy floral note at first on the tongue – but this almost immediately gives way to a prickle and later almost a tingly numbness – more like Sichuan pepper than black pepper and quite extraordinary. I could not wait to see how it tasted in a creamy pepper sauce…

Sauces are some of the things that are so easy to make I can’t believe people actually buy them ready made – so what follows below is my take on a classic steakhouse pepper sauce. The steak itself really is not much of a recipe, more a technique, so in lieu of a recipe you wil get Cooksister’s top tips for a perfect pan-fried steak.

1.  Buy the best meat you can afford.  When you pan-fry steak there is nowhere for bad ingredients to hide so make sure you get the best – nicely marbled and preferably dry-aged.  And once you have spent your hard-earned cash on a good steak do not hide the quality of the meat by slopping a marinade over it!

2.  Have the steak cut an inch thick if you like medium rare or rare meat; or thinner if you like it medium or well-done.  The thinner a steak, the more difficult it is to get it seared on the outside and pink on the inside – so go thicker the rarer you like your steak.

3.  Use a heavy cast-iron pan, preferably a griddle pan with ridges, and pre-heat it before adding the meat.  Putting your meat in a cold pan just encourages it to stick as it slowly heats up and you won’t get that lovely crisp sear that you get from a truly hot pan.  The meat should sizzle loudly when you put it in the pan.  If it doesn’t, your pan is not hot enough. Heavy cast-iron has great heat-retention properties and provides very even heat distribution, which is what you need.

4.   Do not oil the pan – brush a little oil onto the meat. Oiling the pan just risks a smoky kitchen as the oil heats up; and wth a griddle pan, the oil will end up down in the valleys rather than anywhere near the meat by the time you get cooking.

5.  Salt the meat with a little coarse-grained salt just before cooking.  No, it will not toughen your meat, it will draw out moisture and help to form a good crispy crust – but don’t season it hours before you cook it, literally just before it goes into the pan.

6.  Once your meat is in the pan, cook only until moisture beads start appearing on the uncooked surface, then turn.  Only turn your meat once. Turning the meat only once produces a better crust, as well as pretty grill marks 🙂

7.  Test for doneness by pressing on the meat with a closed pair of tongs, not by cutting into it with a knife.  Cutting the meat in the pan merely releases all the beautiful juices and dries out your meat.  Ever seen a slightly-cut steak served in a steakhouse??  Didn’t think so. Rather press on the meat with tongs. For rare, the resistance should feel like pushing on the fleshy part of the base of your thumb;  for medium, like pressing in the centre of your palm; and for well-done, like pressing on the base of your pinky finger (i.e. pretty hard!)

8.  Do not eat serve the meat straight out of the pan – allow it to rest. Cooking meat makes the muscle fibres tense up – which translates into tough meat. Remove the done steak from the pan (important – otherwise it keeps on cooking!) and place it on a warm pate under aluminium foil for 5 minutes or so before serving.  the muscle fibres will relax, making for a more tender and juicy steak. Lightly crush the peppercorns – they should remain fairly chunky so I use a pestle and mortar rather than a grinder.

Heat the butter in a small saucepan and once it is melted, add the shallots.  Cook over medium heat until they are translucent and soft but not brown.  Stir in the flour, using just enough to soak up all the moisture from the butter.  Mix well and allow to cook for a few minutes (this improves the flavour of the sauce)

Add the stick little by little, making a smooth paste with the flour mixture and mixing well between additions.  Allow to simmer until the sauce thickens enough to coat the back of a spoon.

Remove from the heat, stir in the cream, peppercorns and brandy (if using).  The Tasmanian peppercorns will turn the sauce a sumptuous dusky pink – quite intriguing.

As always, serve the sauce on the side – and if you like, do as I did and add some harissa-roasted root vegetables to your plate for colour.

And the finished product?  The steak was quite exceptional – tender, super-succulent and packed with flavour.  I’d make the trip to Morrisons just for these babies! The pepper sauce was a wonderful balance of heat and creaminess – slightly hotter than your average pepper sauce but still with a sweet floral hint.  I may be hooked on Tasmanian pepper now…

**If you enjoyed this post and recipe, please vote for me in the Morrisons Great British Beef Challenge! One click is all that’s needed.  Thank you!**