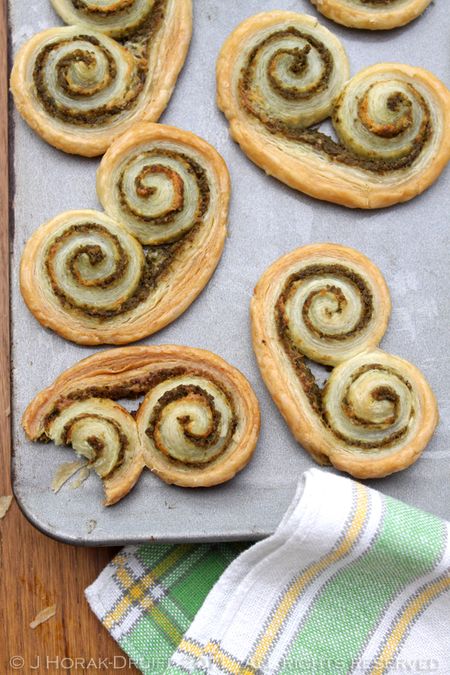 Hands up – who knows which of the above literary devices I used in the title to this post?  You see, despite this glossy facade of food bloggerness which you see before you, deep down I am just a language nerd.  Case in point:  I have been going through some of my  very old posts and renaming them lately, and I am mortified at all the silliness that used to go on my post titles.  “Wish I’d FIGured this one out myself” for a roasted fig salad.  “Gnocchi, gnocchi – who’s there“? for a dish of browned butter and sage gnocchi.  “Muscling in on Kent” for a review of a Belgian restaurant.  The cringeworthy list continues. And it appears that old habits die hard because here I am at it again – evidently I’m like a moth to the flame of literary devices.  But it was just too good to resist!  If life gives you pistouande from Provence (the Vaucluse to be exact), how can you NOT make perfect palmiers? If you have ever been to Provence (and if not, I highly recommend that you go ASAP!), you will probably have come across pistou.  Both the word and the dish have been adopted from neighbouring Italy where it is better known as pesto.  But unlike Italian pesto genovese which is made with basil, pine nuts and cheese, in Provence the pistou generally made with olive oil, basil, and garlic only.  Cheese is sometimes added, but no nuts are included. Pistou is most often used in the typical soupe au pistou, a hearty vegetable soup with a dollop of pistou added before serving to infuse the soup with the fresh basil flavour.  Another ubiquitous treat in Provence is tapenade.  The word itself actually comes from the Provencal word for capers, which is tapenas, and the dish consists of finely chopped or crushed olives and capers, mixed with olive oil to form a paste.  It is usually served with bread as an appetiser and is one of my favourite things ever.

Vaucluse is one of the departments within the French region of Provence, occupying its north-west corner and bordered by the Rhone River to the west. The department is also home to the historic city of Avignon, established by the Celts in pre-Roman times and, for about 70 years in the 1300s, the temporary seat of the Roman Catholic papacy. Vast quantities of fruit and vegetables are cultivated in the lower-lying parts of the department, on one of the most fertile plains in southern France, making it something of a foodie paradise.  So I was understandably excited when the lovely folks at Vaucluse Tourist Board asked me whether I would like a couple of typical Vaucluse ingredients to cook with. Mais oui! One of the items I received was a tub of Pistounade au basilic de Provence from Delices du Luberons.  The name derives from an amalgamation of pistou and tapenade – which is pretty much what this is:  a paste of basil and green olives.  It has a lovely fresh basil taste with the tang of olives and is less salty that a basil pesto would be (because the lack of Parmesan cheese).  It also seems less oily than most commercially available pestos.  Of course, the next dilemma was what to make?  I wanted something in keeping with the pistounade’s French roots so in the end I settled on savoury palmiers.  These pretty rolled puff-pastry treats originated in France around the turn of the 19th century but are popular all over Europe.  Also known as pigs’ or elephants’ ears, they are usually sweet but make fantastic savoury snacks too.

Thye are absolutely no trouble at all to make and can be made ahead and frozen, ready to slice and bake when your guests arrive.  And I can guarantee you they will FLY off the plate faster that you can say perfect palmiers with pistounade from Provence!

DISCLOSURE:  The Pistounade was a free sample sent to me by the Vaucluse Tourist Board. Remove the pastry from the fridge about 10 minutes before using.  Unroll the pastry onto a piece of clingfilm – it should be about long and 25cm wide.

Lightly mark the centre point of the long side of the pastry.  Spread the Pistounade evenly over the whole piece of pastry – try not to get too much of the oil onto the pastry, more of the green paste itself.  Sprinkle the cheese evenly over the pistounade.

One at a time, from each short edge, carefuly roll up the pastry to the centrepoint – the two rolls should meet in the middle and be of equal size.  Carefully wrap the entire double roll in clingfilm and place in the freezer for 30 minutes.  (if you are making the roll well in advance, refrigerate it but then put it in the freezer for 30 mins before slicing).

When ready to bake, pre-heat the oven to 200C and remove the pastry roll from the freezer.  Slice in 1/2cm thick slices and lay the slices out on an ungreased baking sheet, leaving space in betweenfor expansion. Bake in the pre-heated oven for about 10-15 minutes or until puffy and golden.  Serve hot with drinks.

Variations:  instead of pistounade, try sun-dried tomato pesto, basil pesto or black olive tapenade.  You can also use just or finely grated hard cheese, but moisten the pastry with a little olive oil or water first so that the cheese sticks to the pastry while rolling.