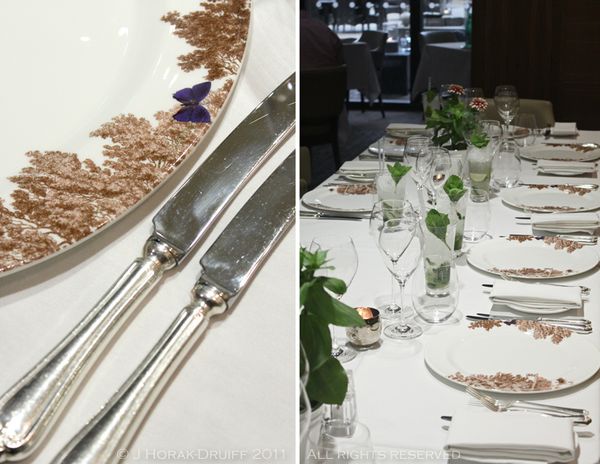 I often have fantasies of winning the Lotto and never having to set foot on a steamy, heaving Tube carriage again. I would have a personal driver to take me here, there and everywhere as I relaxed in the back seat, watching everybody else suffering through their commute.  Or so you’d think.  Last week, Andrew and I were picked up by a cab at Paddington station for the not-so-huge distance to Syon Park.  On public transport (if we’d timed our connection at Waterloo well) it would have taken us about 45 minutes or so.  Instead, it took well over 90.  Lesson learned:  public transport does have its benefits… and don’t attempt to cab it from Paddington to Syon Park at 6pm on a Tuesday if you are on any sort of schedule!

The occasion was an invitation from the Waldorf Astoria Syon Park hotel for a few bloggers to come and have cocktails and a nine-course “landscape” tasting dinner (locally sourced ingredients and dishes inspired by the surrounding landscape, we were told), and a wander around the premises.   The hotel, situated midway (as the crow flies) between Heathrow airport and central London, has been open since about March 2011 and occupies land along the boundary of Syon Park, the London home of the Duke of Northumberland’s family for over 400 years.  In the 18th century, the 1st Duke of Northumberland commissioned architect and interior designer Robert Adam and landscape designer Lancelot “Capability” Brown to redesign the house and estate and it is Brown who gives his nickname to the restaurant.  Pulling up to the front door of the hotel, though, the architecture here is more “late 20th Century Corporate Retreat” than neoclassical and I did catch myself wondering who on earth approved the planning application. The lobby is surprisingly airy and light, and staff get bonus points for being super-smiley and friendly.  Off to one side is a large glass enclosure which is apparently the intended home of a bunch of exotic butterflies (to reference Syon House’s Victorian butterfly house).  Poor butterflies! From the lobby, we were led to the semicircular Peacock Alley bar where we gathered for cocktails. The charming and very knowledgeable barman talked us through the cocktail menu and its inspiration (the long cocktail heritage of the Waldorf Astoria hotel, and the fresh produce grown on the premises).  We kicked off a selection of their new and yet-to-be-listed-on-the-menu signature cocktails with the green Peacock, a blend of Midori melon liqueur and cucumber.  This tasted as fresh and bright as it looks – a perfect pick-me-up after a long journey.  From there, our charming barman moved on to other cocktails with an intriguing premise:  a base made of Cointreau, Drambuie and (I think) apricot puree is used as the basis for four different cocktails.  The cocktails differ only in one respect: the wine added to the base.  So we had one made with champagne (delicious – classic shampagne cocktail); one made with rose wine (pretty in pink); an intriguing sangria-like cocktail made by the addition of red wine; and one made by the addition of an oaky chardonnay (my personal favourite- absolutely luscious range of flavours going on in that glass).  The only downside?  The cocktails cost £14.  Each.  And you are in Brentford, not Soho.  Gulp. From there, we were taken outside to see the courtyard with its reflecting pond and herbs (apparently eight types of mint are grown on the premises, at least two of which were blended into an excellent moijito that was handed to us on our walk) and hear about the cigar bar. We were not taken to see any of the rooms (starting from £250 with  breakfast) but did peer in at the eclectic decor through the windows of the garden rooms as we passed by.  Our destination?  The Victorian-style greenhouse where some of the produce is grown but which will also be used as the location for the chef’s table.  I was really taken with this idea of dinner under the stars in the greenhouse… but sadly the greenhouse was locked so we could not get inside, and the area around it was muddy (“yet to be landscaped” we were told), so we had to observe from a safe distance and merely imagine the delights of dining there. Sigh. From there we decamped to aforementioned Capability restaurant, a room in the classic Generic Hotel Style and rather lacking in character, certainly not referencing the aesthetic sensibilities of its namesake in any way.  The prettiest part of the room was the underplates with their foliage and butterfly pattern – but these were whipped away as soon as we sat down.  Our first course, an absolutely cracking chilled yellow tomato soup was inexplicably served to us while we were out at the greenhouse and after we pleaded impracticality (already juggling camera in right hand, moijito in left!), it was re-served to us at the table.  This was packed with fresh really ripe tomato flavour but served in pretty but annoyingly unbalanced shot glasses – my neighbour’s tipped over and sent soup flying everywhere. Up next was a dish of Dorset snails with black pudding and garlic, served in dinky little copper pots that made all the prop-hungry bloggers’ eyes light up (OK, maybe that was just me!).  I don’t normally like snails, but these were deliciously garlicky and already out of their shells, making me less squeamish about the whole concept.  The black pudding was good too… but in total, the dish comprised about two tablespoons of sustenance, no more.  It was followed by the hotel’s take on the classic and eponymous Waldorf salad, a curiously unengaging dish of celery stick slices, celery tops, a tiny spray of green apple slices and a single slice of pickled walnut.  The dressing was a non-event, the celery was overwhelming (especially if you do not much like celery, like one of my dining companions), and I have to say that I do not think pickling improves walnuts.   Sometimes classics should not be messed with.  On the plus side, it was once again a teensy portion – the bowl really is not much bigger than the base of that wine glass! This was followed by a deep-fried zucchini flower with tomato salsa, on a slice of chargrilled yellow marrow.   The zucchini was young and sweet, the batter was feather-light and crispy, and the chargrilled flavour of the marrow really shone through.  But again – could the portion have been smaller?  Our final savoury course was silver mullet served on potato puree with a steamed mussel (yes, that’s singular, not plural).  I loved this – it’s not a fish I am familiar with but I certainly hope to become better acquainted.  It was cooked to perfection, correctly seasoned, and both the potato and the mussel were excellent – but the piece of fish was approximately the size of two matchboxes (see how it is dwarfed by the mussel??).  The other really annoying thing about these two courses were the plates they were served on – little assymetrical dishes on feet.  Which is fine if you are serving canapés and simply pick them off the plate.  But try cutting something with a knife and fork and applying pressure anywhere but in the centre of the plate?  Think foodie see-saw.  Cue fish and zucchini flipping out of plates and onto the table.  Not a good look. For dessert, we returned to the classics (and an approximately normal-sized portion!) – raspberry Eton mess. This was just glorious, with decadently thick cream flecked with vanlla seeds, and wonderfully tart raspberries. Really good.  And from there, we decamped once again to the bar for more cocktails before heading home.

Much as I loved the cocktails and the friendly staff, it was on the whole a pretty peculiar evening. The nine-course menu turned into six courses with no explanation offered.  Nobody at any stage really elaborated on the cryptic concept of the “landscape” tasting, other than vague reference to the fact that many things are grown on-site. Dinner was accompanied by only three wines – a red and a white, followed by a red dessert wine – rather than a glass to match each course.  This meant that the wine-food pairings were very erratic and when we asked whether we could chat to the sommelier, we were told he was not there that night (!).  The portion sizes were minuscule – I got home starving – and it was not clear whether the dinner we were having was one offered to punters, or cobbled together especially for us, so I can’t tell you what the price might be, or whether to expect similar bonsai portions.  The crockery was simply bonkers – plates that tip over when you cut your food surely cannot be a good idea.

In summary, the cocktails were excellent, the staff were some of the friendliest I’ve met, and the kitchen clearly knows what it is doing – most of the food I had was really good (even though portion sizes were designed for Lady GaGa on diet).  The pricing, though, is optimistic, shall we say, given that the hotel is not in central London.  I found myself wondering who their target market is.  Rich folk on a one night layover at Heathrow?  Corporate functions and weddings?  Hard to tell.  The place lacks the glamorously louche weekend getaway appeal of Babington House in Somerset, so I can hardly imagine Londoners trekking out there, unless they live in the very close vicinity.  If you are curious, it’s probably best to pop in for afternoon tea (they do a savoury and a vegetarian option – £32-36).  Or a cocktail, as soon as that second mortgage on your house comes through.

Liked: the cocktails, the food, the smiley staff

Disliked: the prices, the portion sizes, the impractical crockery

Andrew’s review of the evening is available here.

DISCLOSURE: Thank you to the Waldorf Astoria Syon Park and their PR company for arranging and sponsoring this visit.  I received no remuneration to write this post other than the meal itself and all opinions expressed are my own.